Parvez Rasool: Jammu and Kashmir have played like a family during 2013-14 Ranji Trophy season

Parvez Rasool: Jammu and Kashmir have played like a family during 2013-14 Ranji Trophy season

Parvez Rasool talks about his and his state's rise in a chat with CricketCountry.

Parvez Rasool, the Jammu and Kashmir captain spoke to CricketCountry s Correspondent Nishad Pai Vaidya as his team geared up for the Ranji Trophy quarter-final against Punjab at Baroda.

Parvez Rasool is the star of Jammu and Kashmir cricket. The all-rounder made waves last year as he was picked in India s A team and then made it into the Pune Warriors India squad for the last edition of the Indian Premier League (IPL) at the back of strong domestic performances. He was then picked for the Indian team for the tour to Zimbabwe.

However, this season, Rasool has shined as a captain as Jammu and Kashmir have qualified for the Ranji Trophy quarter-final for the first time. Rasool has led from the front with 550 runs at an average of 50 from eight games. He has also taken 24 wickets, which includes a crucial spell of seven for 87 against Tripura, which ultimately helped them qualify for the next round.

In an exclusive chat with CricketCountry, Rasool talks about the landmark season for Jammu and Kashmir cricket, their star performers and the nervous wait to get into the quarter-finals.

CricketCountry (CC): How did Jammu and Kashmir prepare for this season? Was there anything different you did in the lead-up to the Ranji Trophy?

Parvez Rasool (PR): We performed well during the previous season as well. We had recorded two outright victories and two draws. Plus, one of our sides had won the Nimbalkar Trophy in Pune in the lead-up. Then, we also had the Jammu and Kashmir Corporate Premier League. All those tournaments held us in good stead and when you win, people do take notice. We performed well last season and the guys were very motivated. For me personally, I got good exposure as I played for India A and in the Indian Premier League (IPL). So we didn t do anything extra, but it was normal hard-work coming into this season.

CC: The start to your season was very good as you beat Goa by three wickets. Chasing 262, you were in trouble at 148 for seven. At that stage, did you think the game was lost?

PR: The two batsmen in the centre were playing well and there wasn t much in the wicket. At that stage, we told ourselves, Let s get close to the total. Then Hardeep Singh and Samiullah Beigh started hitting and we were getting confident. We lost too many wickets during that chase, but when your No 7 and No 9 win you a game, your morale gets a boost. That victory gave us momentum for the season and as we progressed, you could see five to six players performing very well. It was team-work right through.

CC: You bat at No 4 for Jammu and Kashmir. However, in the past, it was your bowling that has got you the attention. What was thought behind the strategy of batting at No 4?

PR: For Jammu and Kashmir, I have batted at No 4. My role here is different when compared to what it has been for India A. There I was a bowling all-rounder and I clicked in that role. I do bat in the middle order and try to contribute to the team as much as I can.

CC: How big a setback was the defeat to Himachal Pradesh in the second game? You lost by a huge margin, but bounced back with a narrow 17-run victory over Andhra.

PR: After winning the first game, we were obviously feeling good. We got a seaming track for the game against Himachal Pradesh and they put us in to bat after they won the toss. They had the advantage and we couldn t quite last there. When we went into the game against Andhra, we had our plans in place. Ultimately, the batsmen and the bowlers contributed to that victory. Not to forget the catches we took and the fielding. Of course, we were sad that we had lost to Himachal Pradesh, but we didn t lose heart and continued to play as a unit. The atmosphere in the dressing room has been very good throughout.

CC: You got your ton against Kerala and your team won the game. How important was that game for you personally?

PR: In the game against Himachal, I scored 97, but got carried away and was dismissed. Through the season, we have had good batting wickets and there wasn t much for the bowlers. So, I was feeling good about my batting as I was in good flow. The hundred against Kerala was one knock, but against Maharashtra, I came in to bat at No 9 and got 64 not out. I was ill during that game so had to come lower down the order. Yet, I could contribute to my team s cause.

CC: So, would you rate the 97 against Himachal Pradesh as your best in the season so far, as it came on a seaming track?

CC: Was there anything different to your batting this year? Any technical adjustments?

PR: I have worked hard on my batting during my stint with India A. That gave me confidence and I kept watching the big players and tried to learn from them. I am enjoying my batting. I have also enjoyed bowling, but wickets were not very helpful. But, I will keep trying to do well in all departments.

CC: Last year, your bowling got you the attention, but it was different this time

PR: Our fast bowlers did well and I would get them to bowl more as a result. They bowled most of our overs and later in the season, I did get help from the wickets and I was bowling well. In the game against Tripura, I did record figures of seven for 87. I got eleven off my 24 wickets in the season in the last two games as the wickets were helpful. In many games, I bowled only 12-13 overs, not more.

CC: The ride was a bit bumpy as you lost to Maharashtra and then won against Assam. At what stage did you feel that you could qualify for the next stage?

PR: The game against Maharashtra was good. They put us in on Day One on a wet wicket and we were bowled out cheaply. In the second innings, we did get 439 and I had scored 64 not out batting at No 9. I wasn t well and was hospitalized. But, then we moved to play Assam and we had beaten them last year as well. We were very happy that we beat them in two consecutive years. At the same time, we kept looking at the points table and were doing our calculations.

CC: Talk us through the last game against Tripura. There must have been tension as Goa had won their game

PR: We lost time on the first day as play could only start after lunch. And then Goa were winning outright, so we had our calculations going and had done a lot of planning. Our seniors helped maintain the confidence and we did follow the table. Now, we couldn t register an outright win, but Goa had done that and gone to 28 points. So, we were doing our calculations. Ultimately, thanks to god we did get through.

CC: Words may not describe what it means to Jammu and Kashmir cricket

PR: Ohh yes! We have good talent in the team. Despite not having very good infrastructure, we are in the top eight teams in the country this season. I hope this victory helps the state and we get better facilities and infrastructure.

CC: Looking back, has captaincy put extra pressure on you. Also considering the fact that having played for India A and been named in the Indian team, you are Jammu and Kashmir s biggest hope.

PR: Honestly, there wasn t much pressure. We were playing as a family. The selectors entrusted the job of taking the team along and I could handle it well as the seniors and the juniors performed. It wasn t only one or two players performing, everyone was contributing and it felt good. Seven men have scored over 300 runs in the season and four have taken over 20 wickets.

CC: As a captain, your thoughts on the star performers this season such as Adil Rishi and Samiullah Beigh.

PR: Ali Rishi has got 571 runs so far and Samiullah Beigh has 33 wickets. Mohammad Mudhasir has also done well with 30 wickets. These performances have given us momentum and we hope they continue doing so. 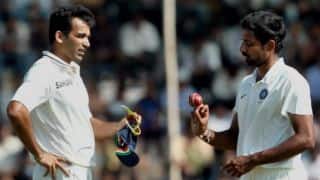 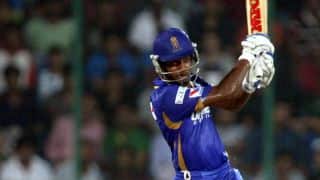