Shantha Rangaswamy played 16 Tests and 19 ODIs for India Women, leading them in 12 Tests and 16 ODIs. More importantly, she was their first Test captain. Under Rangaswamy, India Women did not lose any of their first 6 Tests: they won 5 and drew 1. It was only inevitable that Rangaswamy would become the first woman to win BCCI s Lifetime Achievement Award. The fact that the trophy is named after Col CK Nayudu, India s first Test captain, made the award more special.

Rangaswamy had started off her career with fifties in each of her first three innings. Her 16 Tests fetched her 750 runs. This included the Dunedin Test of 1976-77, where she scored 108 in a team total of 177. When India were left reeling at 15 for 3 in the second innings, she had calmly strode out to the centre and remained unbeaten on 25 this time out of a team score of 45 for 3.

All this was achieved when cricket in India paid no reward, financial or otherwise. For obvious reasons, I had wondered what had kept her going all these years. It could not have been for money, of course, since there was none, during or after their careers. Rangaswamy s colleague Diana Edulji (currently member of BCCI administrative panel) had once walked out of the Doordarshan commentary box when it came to her knowledge that male commentators got paid more than their female counterparts.

Passion, Rangaswamy said, just love for the game. Can you imagine that this will be the first monetary benefit I will be getting in my entire career?

I could not help but think of the IPL auction that had got over barely a week back. I thought of the astounding numbers that had come up. To what extent can a person go for passion? How important.

You know, we knew that if we failed the game would die, she said.

I thought of the current state of West Indies cricket. Then I realised the monumental contribution of Rangaswamy and her teammates.

I think that [making sure women s cricket did not die out in India] is our greatest achievement. All of us were pioneers, she continued. We laid a solid foundation. We ensured the longevity of the game in India. I am proud of being a part of the initial group that laid that foundation.

She was happy, of course, but after the customary thanks she pointed out: More importantly, the fact that they have decided to give it to women s cricket. From now on, I think there will be a beneficiary for women s cricket every year, which I think is the best thing that could have happened for the game. Here was a person who had once set out to with a mission, that of keeping a sport alive; that fire was yet to die out, after all these years.

I m sure Diana has taken the initiative to get this done. Since she is herself on the committee she could not have proposed her own name, she said, almost matter-of-factly.

The obvious question arose, that of how women s cricket is developing in the country. While she was happy about the central contracts finally being in pace, she feels that there is a lot that needs to be done: There is progress, but not at the pace at which things are going. I think we are still very slow.

There were many who considered Padmakar Shivalkar the greatest left-arm spinner they had seen. In Idols, Sunil Gavaskar dedicated an entire chapter to Shivalkar. Unfortunately, he had the misfortune of having a career that coincided with Bishan Singh Bedi. As a result he did not play a Test, and had to remain content with 589 First-Class wickets at a phenomenal 19.69.

I have mixed feelings about the award. I am neither happy nor sad, Shivalkar told me. What can I say? Time has passed by. I had accepted whatever came my way. Jo mil gaya usi ko muqaddar samajh gaya (it was all destiny). Unfortunately, I was after something that was not to be mine. If I had got that, then it would have been the world for me. If the people who chose my name for this recognition were present in the board during my playing days, things could have been different and better. I would have got at least one India cap, Shivalkar voiced.

They said that Shivalkar was unplayable on his day. In the famous Ranji Trophy final of 1972-73 on a rank turner at Chepauk, Madras had fielded Srinivas Venkataraghavan and VV Kumar. They had taken 5 wickets each to skittle out Bombay for 151.

Yes, he was that good. Two seasons later, on a flat wicket at Ahmedabad, East Zone had taken a 110-run lead, and were 18 without loss when play began on the last day. They collapsed for 70 (Shivalkar took 7 for 27) and lost by 7 wickets.

In fact, so desperate was Bombay that they recalled Shivalkar seven years after his retirement. He was past 47 at that stage. He had a reason to be disappointed, more so because this was Bombay: while their monopoly had come to an end, they along with Karnataka and Delhi were the finest sides in Ranji Trophy.

I truly want to thank those people who considered me for this award. I am happy that they thought I am eligible for this award and I thank again to them, he signed off.

Tomorrow, at Shivaji Park the ground that has given the world Sachin Tendulkar will be waiting in the afternoon. There will be no change in the schedule: Paddy-Sir will be there at the nets, scouting for the next talent. He has been doing that for ages.

Rajinder Goel has more wickets (637) in Ranji Trophy than anyone else. Nobody else has more than 530. He averaged a spectacular 18.59 at First-Class level. Just like Shivalkar, Gavaskar dedicated an entire chapter to him in Idols.

And yet, just like Shivalkar, Goel did not play a single Test.

Was it fair? No one had perhaps summed it up better than Dilip Doshi in Spin Punch: I consider these bowlers [India s spin quartet of the 1970s] great and their contribution to Indian cricket undeniable but I still retain the right to question the indispensability factor.

When I had talked to Goel last year he was still upset: Ek baar khila sakte the, agar perform nahin kar paata to do-teen Test ke baad drop kar dete [they could have given me one chance; if I could not perform they could have dropped me after a 2-3 Tests].

He sounded clueless when I called him. He told me that several people had called him to wish him, but he still had no idea exactly what the fuss was about. When I explained the magnitude of the award to him, he asked whether it will be a trophy.

Out-of-the-blue recognition was nothing new for Goel. Back in September 1985, he had received a letter from Gwalior Jail: Bhukha Singh Yadav, a dacoit, had congratulated him for becoming the first man to take 600 wickets in Ranji Trophy.

At least I had a more orthodox profession.

I would like to thank BCCI for the honour, he responded. When I asked him what it felt like, the response was simple: Der aaye, durust aaye [better late than never].

The timing could not have been more apt. It was essential that Shantha Rangaswamy, Padmakar Shivalkar, and Rajinder Goel superstars of Indian cricket got their due. It was time an entire nation woke up to find their names on the front page, even if the recognition came decades after they had bowed out of mainstream cricket. Pakistan Super League final will be held in Lahore 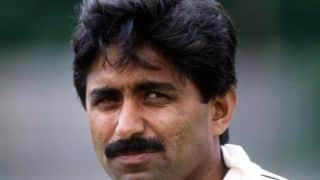