Pakistan cricket has gone through some major upheaval in the recent past with the almost regular change in leadership due to imposition of orders by the courts as well as the government of Pakistan. With one Chairman being replaced by another and then being asked to leave again, the reputation of Pakistan cricket has understandably taken a major battering on the domestic and international front.

Amongst the many well wishers, none other can claim to be more passionate than the former captain of Pakistan, Mushtaq Mohammad. The Younger brother of the “Little Master” Hanif Mohammad, Mushtaq made his Test debut in 1959 against the West Indies in Lahore. He was an accomplished right-handed batsman of his time and played 57 Test matches and scored 10 hundreds and 19 fifties. He was also an effective leg break bowler and he took 79 Test wickets including three five-wicket hauls.

Mushtaq played his final Test for Pakistan in Australia in 1979, not before he had captained Pakistan in 19 Test matches from 1976–77 to 1978–79. Amongst his most memorable feats was a gutsy 121 and a bowling performance of eight wickets against West Indies at Port of Spain in 1976–77 to inflict a rare home defeat on the West Indies. He also led Pakistan to a 2–0 win over India when the two countries played their first series against each other in eighteen years in 1978–79.

The 70-year old veteran now lives in England but the distance is no bar for Mushtaq to express his surprise and frustration at the events unfolding back home and in exclusive remarks to PakPassion.net, Mushtaq described the situation at the Pakistan Cricket Board (PCB) as unacceptable, stating “I can safely say that what is happening at the PCB is completely unacceptable. We have Chairmen changing every other day and there is no sense of continuity. There is no method or law which seems to dictate the workings of this organization which is very sad.”

With Najam Sethi and Zaka Ashraf involved in a seemingly endless tussle to remain in power, Mushtaq expressed his bemusement at pronouncements about the introduction of international cricket made by both competitors which were meant to outdo each other in front of the public “Every other day we have one Chairman or the other coming on television and talking about how they can restore international cricket in Pakistan but maybe they should put their own house in order before inviting others to come and visit it!”

With no end in sight for a resolution to the puzzle, Mushtaq feels that it’s high time that people on all sides of the divide realized that such changes of power were damaging to Pakistan cricket and the only hope lay in some kind of compromise which allowed one Chairman to stay and effect positive change.

Mushtaq added “It might be too late now but the only real way to resolve this issue is to allow whoever is in position to stay there and implement some sensible policies over a period of time. If you keep on pushing people out then how can they ever make a difference or effect change.”

Mushtaq also played county cricket where he captained Northamptonshire between 1975 and 1977, leading the side to victory in the 1976 Gillette Cup, the county’s first-ever trophy, and to second place in the County Championship, equaling its best-ever position. He is well versed with the workings and the governance of the ECB which he regards as an example for the PCB to follow.

“In Pakistan we do not seem to have a proper system to appoint a Chairman. He is selected by the Patron in chief. Currently that person is the Prime Minister of Pakistan Mian Nawaz Sharif so he brings in Mr. Sethi. During the previous Government’s time, it was Mr. Ashraf. Both of these gentlemen, in my view, are not suitable for the role they were chosen to perform. Here in England, the counties have their Chairmen who perform at the county level and the ECB Chairman is selected amongst them. In Pakistan, we can have a similar system where the regional heads can be eligible to lead the PCB but unfortunately what we have is totally the opposite. No wonder we are in this mess!”

The uncertainty at the helm of affairs in the PCB is not only a matter of shame for all stakeholders of Pakistan cricket, it is also a cause of considerable anxiety amongst the recently chosen coaching staff for Pakistan. Mushtaq feels that the likes of Waqar Younis who was recently selected as Head Coach will be unnecessarily feeling the heat due to no fault of his own, “This must be a tough time for Waqar who in my view is an excellent choice for the role as is Mushtaq Ahmed as spin bowling coach – both of whom have served Pakistan well in the past and will do well. I have heard some criticism about their selection on the basis of their names being mentioned in Justice Qayyum’s Report, but to me that is totally irrelevant. The report is based upon a different time period and the players were mentioned and fined so we should move on and accept them as coaches. They have a job to do and let’s give them the space and freedom to perform before getting on their backs as we usually do.”

With news reports indicating that the Zaka vs Sethi duel is not likely to diminish in intensity in the near future, well-wishers of Pakistan cricket, like Mushtaq Mohammad, are understandably looking outwards for candidates who could have a calming effect on the present situation. The veteran cricketer clearly feels that Pakistan needs some wise leadership to lead them out of this quagmire “In my view Tauqir Zia and Arif Abbasi have both served Pakistan well in the past and the leadership skills of both of them is what Pakistan needs for stability. Tauqir Zia should be the next Chairman of PCB with Arif Abbasi also having a key role in PCB affairs. This needs to be done very soon to lead Pakistan out of this crisis”, he concluded. 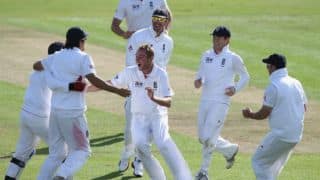