PCB to promising young bowlers in Pakistan: Bowl with a clean action and go straight to Heaven!

PCB to promising young bowlers in Pakistan: Bowl with a clean action and go straight to Heaven!

Ahmed Shehzad is the brand ambassador of this campaign.

Tired of seeing their bowlers being caught in the chucking net, the Pakistan Cricket Board (PCB) have announced that they are going to stop caring about correcting suspect actions and will instead focus on rewarding those with clean action. In the ongoing domestic season, as many as 29 bowlers have been reported for suspect actions and 16 of them already suspended. At this rate, there can be a separate event called Chucking Premier League (CPL) itself.

PCB chief Shahryar Khan said, “We’ve had enough. Anyone bowling with a clean action will go straight in to the Pakistan national team. At the same time we need to encourage the beautiful art of spin bowling at the lower levels as well. For young, upcoming Pakistan bowlers, we have thus come up with a campaign, ‘Embrace bowling with a clean action and go straight to heaven [after your death]’ “.

Ahmed Shehzad is the brand ambassador of this campaign.

The PCB is planning to take assistance from Saqlain Mushtaq, the inventor of doosra and also ‘teesra’ to help the bowlers. PCBs desperation has only grown over the past few weeks as their new app for detecting suspect action crashed as the app was tired of giving a beep at every bowler bending more than the permissible 15 degrees.

“Chuck it; let’s do it,” Shahryar Khan reportedly told the Pakistan cricketers. The suave Shahryar was inspired by Sir Richard Branson’s book, but let’s hope the Pakistani cricketers don’t misconstrue the word “chuck”! 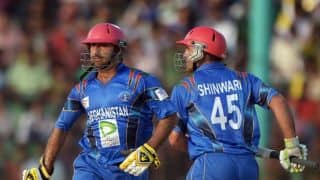 Afghanistan through to semi-finals in Asian Games 2014; beat Nepal by 8 runs