Perth Scorchers are set to feature in their third CLT20.

Perth Scorchers had a forgettable outing in the 2013 edition of the Champions League T20 (CLT20). However, things might not be the same this time around. Abhijit Banare analyses the Perth squad and what makes them a strong side in this tournament.

Captain: The successful Big Bash League (BBL) season came under Simon Katich who was also the second highest scorer in the BBL 2013-14. With Katich retired, 34-year-old Adam Voges will be leading the side. Voges is an exciting player to watch in T20s. Being the captain of Western Australia; Voges has the necessary experience and skill to lead the side.

Simmons has been around in Australia’s domestic circuit in 2003. But it took two matches after a decade to get noticed around the world. He grabbed the headlines with a record 39-ball ton (fastest ton in the tournament’s history) against Adelaide Strikers in the 2013-14 season of BBL. He followed it up with another ton in the semi-final against Sydney Sixers. Simon Katich and Simmons were Scorchers’ top-two run-getters in BBL. With Katich retired, the team will look to Simmons for good starts.

There couldn’t have been a better time for Mitchell Marsh to come in to a T20 tournament. He’s having a good time after making a mark in Zimbabwe. Moreover, if you can hit three consecutive sixes off Dale Steyn in a One-Day International (ODI), you are sure to generate expectations. Marsh has played here in the Indian Premier League (IPL) but couldn’t impress much. His success in ZImbabwe and his selection for the United Arab Emirates (UAE) tour will see a confident Marsh coming out to bat.

In the bowling, Perth have Nathan Coulter-Nile, Brad Hogg, Yasir Arafat and Jason Behrendorff. That’s a good bowling line-up with Marsh being a key all-rounder as well. They also have the young Ashton Agar. Among these bowlers, Arafat and Hogg will be the key.

Arafat is a T20 globetrotter and has played for as many as 11 teams. He is an expert in death overs and on flat decks the value of delivering yorkers consistently is gold dust. His ability to absorb the pressure with so much experience in this format makes him an asset to the team. He was the leading wicket-taker for the Scorchers with 12 wickets in the last season.

On the other hand, Hogg, the chinaman bowler has enough experience of the conditions here. He was part of the Rajasthan Royals side last year. More than the wickets, Hogg’s ability to stem the run-flow makes him a valuable player in T20s. He was Perth’s best bowler last BBL season in terms of economy rate.

Strengths: They do have a solid batting line-up in Simmons, Voges, Marsh and are equally stable in the bowling department with Hogg, Arafat and Coulter-Nile. Two of the Aussie bowlers have a good experience bowling on Indian pitches which gives them an edge over other touring teams.

Weakness: The BBL winning side will be without some key players. Shaun Marsh is one batsman who would have made this a much stronger batting line-up. The leading run-scorer in the tournament Katich has retired leaving a gap in the batting line-up. If the stars of the side struggle to get going, Perth could be in trouble.

Past record: Perth played for the first time in the CLT20 in the 2012 season. They lost three of their four matches. The 2013 tournament too wasn’t a memorable one as they failed to win any match. And they came in the line of fire in their final match when they played against Mumbai Indians. Mumbai needed to chase the target of 150 in 14.2 overs to qualify for semi-finals. And Scorchers bowlers wouldn’t want to even look at the scorecard ever in their life. 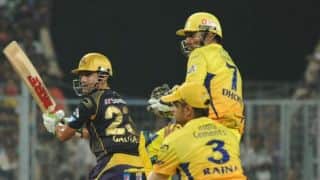