Tours to Australia or New Zealand from West Indies (or the other way round), even in the 1970s, often involved halts at Fiji, and more often than not there was a cricket match. This gave Fijians a chance to pit themselves against a Test side, while the big guns could take their minds off the high-profile contests. More often than not these were of short duration that resulted in draws with the touring sides dominating the same way Pakistan did en route from Australia to West Indies. However, on January 25, 1977, Peter Muspratt gave the tourists a real shock, running through a full-strength side with 8 for 62 at Lautoka. Abhishek Mukherjee re-lives a forgotten performance.

Though Papua New Guinea have climbed up the rungs of international cricket at a rapid rate, cricket in the smallest continent has always been synonymous to the sport in Australia and New Zealand. However, Fiji often served as a halt for teams travelling on the route connecting North America and Australia and/or New Zealand.

Despite not being the best cricket side in the world, Fiji were never short of enthusiasm. They often took field in sulu; batted and bowled in gay abundance; and brought a sense of amateurish joy that has been long lost.

They also had their giants: IL Bula (often referred to as the Fijian Bradman) once made waves in New Zealand (and was considered for the New Zealand Test side thanks to a loophole in the ICC laws), while his teammate Petero Kubunavanua featured on a postage stamp before Don Bradman and Viv Richards.

The greatest moment in the history of Fiji cricket, however, came in 1955-56; en route to New Zealand, West Indies were skittled out for 63 by Jack Gosling and Asaeli Driu, losing a one-innings match by 28-runs.

Pakistan were en route to West Indies after a three-Test series in Australia. They had almost lost at Adelaide Oval; requiring 56 in close to an hour-and-a-half, Gary Cosier and Rod Marsh added a mere 33. Dennis Lillee flattened Pakistan at MCG, but Imran Khan took his revenge at SCG, squaring the series. The tourists left Australia on a high.

They had a two-week break at picturesque Fiji, but unfortunately it turned out to be an organisational disaster. Peter Oborne wrote in Wounded Tiger: “In theory an idyllic visit, it turned into a fiasco. Only a handful of senior players stayed in hotels, the remainder being billeted with local people.”

A few senior players protested (never trying to hide their emotions) that Servis Shoes, a major sponsor of Pakistan domestic cricket, used the Fiji tour for promotion and marketing.

Let us, however, focus on the two-day match. Churchill Park, Lautoka, a multi-sport ground with a picturesque backdrop, was chosen as the location. It was at this ground that Fiji’s Amenayasi Turaga (6 for 15) and Savenaca Naro (4 for 6) had bowled out New Zealand Forces for 22 in 1942. The tourists had escaped on that occasion with 9 wickets down in the fourth innings.

The ground had a turf pitch, but unfortunately Fiji was hit by two cyclones (Marian and June) in the preceding weekend. A concrete pitch, covered in mat, was arranged for. Pakistan were used to matting wickets till a decade back, but BCCP had decided to switch to turf following a recommendation by Richie Benaud following Australia’s 1959-60 tour.

This made Fijian manager Alan Martin somewhat optimistic. He told The Canberra Times: “This [mat on concrete] could give us some advantage. Pakistan will be playing against an unknown quantity, and we might be able to give them a good match.”

Pakistan manager Shujauddin Butt made it clear they were not taking the match seriously: “We hope to be able to help local cricketers and promote the game here. We should be able to pass on some of the things we have learnt in international cricket.”

Mushtaq Mohammad had opted out of the match, as had Imran Khan, Majid Khan, and Sarfraz Nawaz. Barring that Pakistan had a full-strength side. Intikhab Alam led Pakistan in Mushtaq’s absence.

The Fijian side consisted of three Australians: Bruce Robb, a spinner (who had taken 10 for 73 shortly before the match); Ian MacErlich, a left-handed batsman; and Peter Muspratt, an all-rounder. In Satish Desai they also had an Indian.

However, the best player of the side was almost certainly Eroni Loganimoce, who went on the tour of New Zealand in 1953-54. From 3 First-Class matches he had taken 5 wickets, including that of Test cricketer Gordon Leggat.

The tourists batted first, and were surprised by Muspratt in no time: Taslim Arif, Haroon Rasheed, Javed Miandad, and Wasim Raja was a strong foursome, but Muspratt took them out one by one. The score read 54 for 4, leaving the tourists in disbelief.

Zaheer Abbas joined Sadiq Mohammad, and the pair added 36 before Cagi Gaunavou got Sadiq for 34. This brought Intikhab to the crease, and with him some sanity was restored. Zaheer and Intikhab added 77 before Muspratt dismissed the captain for 40; it was his fifth wicket.

It was Curly Valentine’s turn this time to strike as he trapped Saleem Altaf leg-before. Zaheer stood firm at one end, but Muspratt ran through the tail, removing Iqbal Qasim, Sikander Bakht, and Asif Masood in no time.

Unfortunately, the Fijian batsmen did not do justice to Muspratt’s performance. Three of their first four batsmen scored ducks before Qasim (4 for 28) bowled them out for 101 while Sadiq chipped in with 3 for 28. Intikhab chose not to impose the follow-on, and the tourists provided some excellent entertainment, finishing on 156 for 5 batting at 5 an over.

It was one of those regulation two-day matches dominated by a strong visiting side over a weak host. For Fijians, however, Muspratt became a hero.

The Test series in West Indies was a pitched encounter. West Indies were 9 down, saving the first Test at Kensington Oval. Colin Croft blew Pakistan away at Queen’s Park Oval with 8 for 29, but the tourists came back with an honourable draw at Bourda.

Then came the fourth Test, also as Queen’s Park Oval, one that should be called Mushtaq’s Test but is not, for some reason. Mushtaq scored 121 and 56 and claimed 5 for 28 and 3 for 69 to lead the tourists to a 266-run win. West Indies sealed the series with a win at Sabina Park, but Pakistan had certainly not disgraced themselves in defeat.

The series also established Raja as one of the greatest batsmen against the West Indian fast men at their prime: he scored 517 at 57 with a hundred and three fifties (he also claimed 7 wickets at 19). 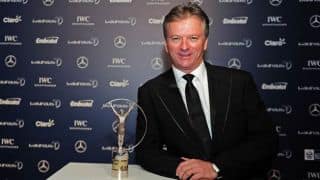