Poll: Who should be India’s stand-by wicketkeeper to MS Dhoni in ODIs?

Poll: Who should be India’s stand-by wicketkeeper to MS Dhoni in ODIs?

Dhoni continues to lead in this format but with him at twilight of his career, India should always be ready with a sound back-up

Mahendra Singh Dhoni has redefined the role of a wicketkeeper-batsman in international cricket and has inspired a generation of youngsters. Dhoni’s retirement from Test cricket opened the doors for Bengal glovesman Wriddhiman Saha, who has made use of the limited opportunities. However, One-Day Internationals (ODIs) are a different ball game.

Dhoni continues to lead in this format but with him at twilight of his career, India should always be ready with a sound back-up. Dhoni’s boots are too large for anyone to fill but there’s no dearth of talent in Indian cricket. Saha, who is the first choice Test keeper for India, has a fantastic record in List A cricket. He averages close to 45 and as far as keeping skills are concerned, he is widely regarded as India’s best.

Then there is Robin Uthappa, who has a sound international experience and is known for his belligerent approach with the bat. Uthappa’s keeping skills aren’t up to the top-mark but he makes up with his match-winning abilities with the bat. Kedar Jadhav is another option. Recently, he scored a match-winning hundred in Zimbabwe but again he isn’t a regular keeper.

Naman Ojha, who recently made his Test debut, is another strong candidate. Ojha has a sound attacking game and is a decent keeper. However, there are many who would vouch for the 20-year old Sanju Samson. All the others mentioned have either past 30 or nearing the mark, while Samson is the youngest of the lot.

Age apart, Samson has shown enough class and has been tagged as the ‘next big thing of Indian cricket’. A quality batsman, Samson is improving under the watchful eyes of his Rajasthan Royals mentor and India A coach Rahul Dravid. He recently made his India debut in a T20 match in Zimbabwe and it’s clear that selectors have their faith on him. 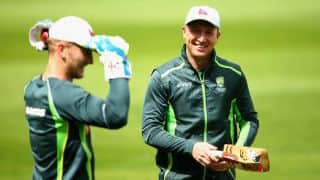 Poll: Should Suresh Raina bat at No. 3 for India in T20Is?