Pravin Tambe, the 41-year old Rajasthan Royals’ leg-spinner dazzled in their encounter against the Highveld Lions at the Champions League T20 2013. At an age where cricketers have normally moved on, Tambe actually made his senior debut after years of toil and hard work. Nishad Pai Vaidya spoke to Abey Kuruvilla, who has watched Tambe from close quarters, and discovers Tambe’s journey. 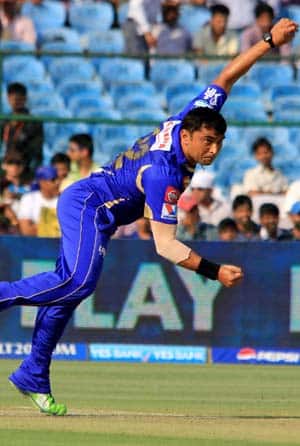 Pravin Tambe, the 41-year old Rajasthan Royals’ leg-spinner dazzled in their encounter against the Highveld Lions at the Champions League T20 2013. At an age where cricketers have normally moved on, Tambe actually made his senior debut after years of toil and hard work. Nishad Pai Vaidya spoke to Abey Kuruvilla, who has watched Tambe from close quarters, and discovers Tambe’s journey.
The Dennis Quaid starrer The Rookie chronicles the journey of Jim Morris — a man who quite remarkably made his Major League Baseball (MLB) debut at the ripe age of 35. If Bollywood wanted a similar story, they needn’t look further that Rajasthan Royal’s Pravin Tambe. The leg-spinner made his senior debut at the age of 41 during the Indian Premier League (IPL) 2013 and dazzled during Rajasthan’s Champions League Twenty20 (CLT20) 2013 encounter against the Lions by picking four wickets. Sans a First-Class game or any outing at a senior level, Tambe finally made it big this year, after years of toil and sweat. Isn’t this just like a movie script? A man pursues his dreams for years and at last gets his moment under the sun!

Tambe has been playing on Mumbai’s club circuit for years. He now turns up for the famous Dr DY Patil Academy, which is coached by the former India fast-bowler Abey Kuruvilla. In a chat with CricketCountry, Kuruvilla was full of praise for Tambe after his match-winning spell on Wednesday, “He is a very committed cricketer. His attitude is fantastic and that is what has helped him.” One certainly needs character to make a senior debut at an age where the most cricketers hang-up their boots and move away from the game.

Even skipper Rahul Dravid acknowledged Tambe’s heartening tale. He told the media after the Rajasthan win, “What a story. For someone who has not even got a chance to play First-Class cricket and has worked hard all these years in Kanga league, it is terrific story.” Tambe’s journey has been one of struggle and a never say die spirit. In 2000, he did play for a representative Mumbai team against Kenya. Since then, he has plied his trade at the club levels in Mumbai and also in the Liverpool and District Cricket Competition in England.

But, did Tambe ever expect that he would finally make the cut? Kuruvilla said, “The ability was always there. The thing is he never gave up and always had a positive frame of mind.” To top it all, he hones one of the most difficult arts in cricket — leg-spin. Kuruvilla said that Tambe wasn’t originally a leg-spinner and had in fact started off as a medium pacer. Mumbai is also famous for its tennis-ball cricket tournaments and Tambe was one of the top players there.

Inadvertently, Tambe has certainly become an inspiration to many cricketers. When one glaces at any cricket field in Mumbai, one can see scores of men plying their trade with an endeavour to rise to a higher level. Tambe is a symbol for them and one man they would all look up to. “What Tambe has done is that he has given players hope that even if you don’t play First-Class cricket, you still have a chance to make a name for yourself. If you have the ability, that is what matters. Age is just a number and it isn’t a factor.”

Virender Sehwag, Gautam Gambhir and Zaheer Khan need to prove their worth like Yuvraj Singh