Sachin Tendulkar remains the only cricketer to score hundreds on debut in all three premier championships in Indian domestic cricket.

Mumbai has provided a consistent flow of talent to Indian cricket over the years, especially with illustrious batsmen, from Vijay Merchant and Rusi Modi to Sunil Gavaskar and Sachin Tendulkar and beyond. It is now over to 17-year old Prithvi Shaw to carry forward the mantle. Shaw is scaling new levels and breaking several records in the process, effortlessly. In the final of the 2017-18 Duleep Trophy between India Red and India Blue, Shaw slammed his maiden century on his first appearance in the championship. After adding 74 stand with Akhil Herwadkar, Shaw had a double-century partnership with his skipper Dinesh Karthik to keep India Red on top.

Although Shaw was dismissed for 154, he added sufficient runs on board to keep India Red on course. His 249-ball innings comprised of 18 fours and a six. With bowlers like Ishant Sharma, Pankaj Singh and Jaydev Unadkat in the line-up, India Blue skipper Suresh Raina might have expected to dismantle the Reds in the first day. Shaw spoiled his plans, being particularly harsh on Ishant.

For Shaw, Duleep Trophy would not have happened had Ambati Rayudu been struck by injury. He made excellent use of the opportunity and added yet another record to his cap. He became the second-youngest player — at 17 years 320 days — to score a century in Duleep Trophy, just 58 older than what Tendulkar was when he had got his first Duleep hundred.

It was not the first time that Shaw had announced his arrival in a tournament in style. He had scored a hundred on Ranji Trophy debut as well, that too in the semi-final.

Four years ago, Shaw burst into the cricketing world after a whopping 339-ball 546, then the highest score by an Indian batsman in minor cricket, in a Harris Shield match in Azad Maidan. His innings lasted for two days that comprised of 85 fours and 5 sixes. He had bettered the records set by Armaan Jaffer and Sarfaraz Khan, who had scored 498 and 439 respectively.

He was ready for the next level, as he showed, just like a certain Tendulkar had done in the late 1980s.

After piling runs through domestic and club matches, Shaw made his debut in Ranji Trophy for Mumbai. He became the youngest to score his maiden century, against Tamil Nadu in second innings of the semi-final. He was also the 17th batsman to score a century on his maiden First-Class match for Mumbai. Ajinkya Rahane, ‘Jungly’ Grieg and Prashant Naik were the ones who got their centuries outside Ranji Trophy.

It will not be long when Shaw may emulate Tendulkar in the near future.

Apart from Tendulkar and Shaw, there were several other cricketers who claimed their maiden Duleep Trophy century in an interesting fashion.

Milkha Singh, the dashing left-hand batsman and a fine fielder, was the first to score a century in Duleep Trophy. He had hit 151 for South Zone against North Zone in the inaugural edition of the championship, at Madras in 1961-62.

The list features a few illustrious names. Mohammad Azharuddin was the first batsman to score a double-century on Duleep Trophy debut, at Jamadoba in 1983-84 against Central Zone. Sanjay Manjrekar and Rakesh Parikh got double-centuries thereafter.

– Sunil Gavaskar and Ramnath Parkar both scored hundreds on Duleep Trophy debut — while opening batting in the same innings, for West Zone against East Zone, at Jamshedpur in 1971-72.

– On January 11, 1991, Tendulkar became the youngest to score a debut Duleep Trophy century against East Zone. He was 17 years 262 days old at that point. In the same match, Sourav Ganguly did the same, for East Zone.

– Tendulkar continued his awesome form. He became the first to score two hundreds in his first two Duleep Trophy matches. The second hundred came against South Zone at Rourkela in the same season.

– February 2004. South Zone were floored by a certain Kevin Pietersen-storm when BCCI had invited England A to play as the sixth team in the Duleep Trophy. Pietersen’s merciless devastation left South Zone in complete daze. This was even over a year before his Test debut. Pietersen became the first to score hundreds in each innings on Duleep Trophy debut.

– Apparajith had left not just West Zone but also Chepauk stunned with his debut double-century in 2014. However, he continued his volley of thunderous strokes in the next match as well with a knock of 109, thus emulating Tendulkar. His teammate Ankit Bawne, also a Duleep debutant, also raised a century.

– The same championship witnessed a one-of-a-kind incident during the East Zone vs North Zone semi-final match at Kochi. Duleep debutants Unmukt Chand, Ian Dev Singh and Rajat Paliwal achieved the unthinkable when they all struck tons. Interestingly, Dev Singh and Paliwal both retired hurt on similar scores of 95 in the innings. They later returned to celebrate their milestones.

– If becoming the leading run-scorer that included a triple-century in Ranji Trophy 2016-17 was not enough, Priyank Panchal ensured he began the Duleep Trophy on right note against India Green. He got a century in each innings with the pink ball and showed a ‘green’ signal to the Reds to proceed in the championship.

– In the same championship, where Indrajith became the fifth player to score first double-ton, Deepak Hooda got his century as well.

Note: Prior to his Duleep Trophy century, Tendulkar raised his bat to celebrate his milestone in Irani Cup in 1989-90. He also had a hundred on Ranji debut. He remains the only cricketer to score hundreds on debut in all three premier championships in Indian domestic cricket. Hooda, too, has scored hundreds on Ranji and Duleep Trophy debuts. 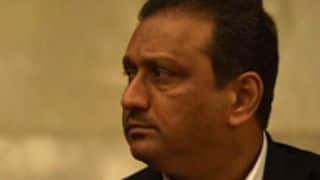