There were eight hundreds and eight five-wicket hauls in the 1983 World Cup.

As the tournament spread beyond the big Test grounds (Lord s, Old Trafford, Headingley, Trent Bridge, Edgbaston, and The Oval), runs increased. As many as four scores went past the 300-mark; two matches (Pakistan 338 for nine, Sri Lanka 288 for nine at Swansea; England 333 for nine, Sri Lanka 286 at Taunton) had match aggregates in excess of 600. Sri Lanka chased well on both occasions, which was probably an indication of things to come.

There were eight hundreds and eight five-wicket hauls in the tournament. Though India won the World Cup, they accounted for only one of each, both from Kapil Dev. They were also the first One-Day International (ODI) hundred and five-for for India. Kapil also finished with most runs for India, best economy rate for India, and most catches by a non-wicketkeeper in the tournament. Oh, did I mention he was also the captain?

The top wicket-takers were Roger Binny, followed by Madan Lal and Ashantha de Mel, who shared the second spot. While this accounts for India s supremacy (we still have not mentioned Mohinder Amarnath, Man of the Match in semifinal and final), de Mel was undoubtedly the surprise package of the tournament; he became the second bowler (after Gary Gilmour to take two five-fors in a World Cup).

Viv Richards and Gordon Greenidge, having scored the only tons in 1979, added one more to their tally in 1983. Once again the tournament was dominated by fast bowlers, though Abdul Qadir and Vic Marks impressed. Let us look at the top performers of the tournament. Let us have a look at who the heroes of the tournament were:

Batting records: David Gower topped the charts with 384, and four others went past the 300-mark; all of them averaged in excess of 60, and barring Graeme Fowler, everyone had strike rates over 80. One cannot blame Fowler for the simple reason that he partnered Chris Tavare, who surprised the world by hitting a six against Sri Lanka.

Though Imran Khan played as a specialist batsman, he led Pakistan in the tournament; he justified his selection, scoring 370 at 70.75 with a strike rate of 76.5.

Though the list was dominated by strokeplayers like Kapil and Sandeep Patil (with Guy de Alwis chipping in with a strike rate in excess of 100), Gower once again made his presence felt. Without a shade of doubt Gower was the batsman of the tournament.

Kapil made it to the record books with his 175 not out; not only was it a breathtaking once-in-a-lifetime performance, it was also the new world record, going past Glenn Turner s 171 not out. The next on the list was 130 by no prize for guessing Gower.

Bowling records: As mentioned above, Binny, Madan Lal, and de Mel were the top three names on the list, with Richard Hadlee and Vic Marks joining the fray. All five men had averages less than 20, and barring Marks, strike rates less than 30 which probably show that there was more to ODI bowling than containing.

Though Hadlee topped the averages chart, Malcolm Marshall comes second despite not taking four wickets in an innings. His 12 wickets came at 14.58, though Hadlee s 14 wickets at 12.86 were peerless.

De Mel s nigh-unbelievable strike rate of 23.3 put him at the top of the list, with Hadlee coming second, followed by the Indian pair. Abdul Qadir s appearance at five was good news for wrist-spinners.

Marshall was the most economic bowler of the tournament, but when it came to being miserly, you could not put Joel Garner out of the equation. The usual suspects, Bob Willis and Kapil, also made it.

De Mel claimed two of the eight five-wicket hauls in the tournament, while Ken MacLeay s six for 39 against India resulted in a surprising one-sided contest. Winston Davis, however, stole the show: his seven for 51 against Australia was the first ODI seven-for.

Fielding and wicket-keeping: Jeff Dujon, Syed Kirmani, and Ian Gould all finished with over ten dismissals. As for stumpings, Wasim Bari topped with three, Kirmani had two, while Dujon and Gould had one apiece.

As mentioned above, Kapil pouched most catches (eight) a count that was exceeded by only four wicketkeepers.

Record partnerships: Greenidge featured in the highest partnership of the tournament an unbeaten 195 for the third wicket with Larry Gomes. The record opening stand of an unbroken 172 was also by West Indies, but it did not involve Greenidge (Desmond Haynes and Faoud Bacchus were the men involved). However, possibly the most impactful partnership of the tournament was the unbroken stand of 126 between Kapil and Kirmani at Tunbridge Wells; had Zimbabwe broken through the stand early India might not have made it to the semifinal.

Team aggregates: Swansea and Taunton features a couple of big scores, which did not come as a surprise. Australia did a commendable job, putting up 320 for nine against the eventual world champions and beating them by 162 runs, though India had their revenge later in the tournament. 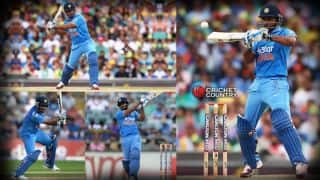