It is the final showdown as Peshawar Zalmi and Quetta Gladiators battle it out for the gorgeous Pakistan Super League (PSL) 2017 trophy on Sunday.

It is the final showdown as Peshawar Zalmi and Quetta Gladiators battle it out for the gorgeous Pakistan Super League (PSL) 2017 trophy on Sunday. The match, to be played at the Gaddafi Stadium, Lahore, has already created a lot of buzz for bringing international cricket back to Pakistan. While players like Kevin Pietersen, Luke Wright and Tymal Mills have opted out of the final, others like Marlon Samuels, Darren Sammy, Chris Jordan will travel with the team to make the initiative a success. As the two teams collide in the action packed match, here are the likely XIs for both the sides they might take the field with. Lahore turns into fortress ahead of PSL 2017 final

Top-order: While Peshawar Zalmi s foreign players are known to have agreed to play in Lahore, Quetta Gladiators have a few changes lined up. Ahmed Shehzad will get a new partner in Anamul Haque as Luke Wright will not be present. Shehzad s 71 in Qualifier 1 was a match-winning knock and in absence of star player Pietersen, he will have to take charge of the top-order. Anamul, too, is a very good batsman up the order and will look to leave a mark with his performance in the important match. To replace Pietersen, Gladiators might play veteran Zimbabwe cricketer Elton Chigumbura.

For Peshawar Zalmi, the order is supposed to be unchanged to not break the momentum, except Shahid Afridi who has picked up an injury and will not play the final match. Karman Akmal is in a terrific form in the tournament and will be expected to pull off something similar to his 65-ball 104 in the previous match. Dawid Malan is his perfect partner who has been consistent in the tournament. At No. 3, hard-hitter Marlon Samuels strengthens the top-order. PSL 2017: Five-layer security for final in Lahore

Middle-order: With no Rillee Rossouw, Sarfraz Ahmed will have to promote himself up and come out at No. 4 to maintain the balance in the squad. They might opt for Asad Shafiq to come down the order to fulfil the void created by Rossouw. Anwar Ali, Saad Nasim and Mohammad Nawaz are capable of hitting hard down the order.

Playing at No. 4, Mohammad Hafeez has scored a brilliant 77 and it will be wise to let him bat at the position he is most comfortable in. The biggest miss for Peshawar will of course be Afridi and Harris Sohail is likely to step up and come out at No. 5. An interesting choice will be to include Sohaib Maqsood in the XI to provide more solidity to the middle-order batting. At No. 6, Darren Sammy comes out to hit big sixes and accelerate the scoring. PSL 2017: Shahid Afridi ruled out of final at Lahore

Bowlers: Anwar Ali will retain his spot in Gladiators side as the leading pacer while Aizaz Cheema joins him in place of Tymal Mills. However, team s main bowling strength lies in their spinners Mohammad Nawaz, Zulfiqar Babar and Hasan Khan.

Chris Jordan will be the bowler upon whom Peshawar will depend the most. Along with him is another talented pacer Wahab Riaz. Hasan Ali completes the pace attack. Mohammad Hafeez and Mohammad Asghar will constitute the spin attack but the team will miss the services of Afridi. 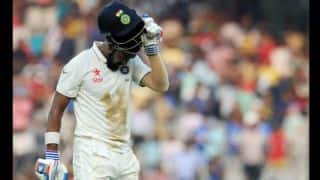