In just four years, PUSH has gained a reputation on par with the leading cricket academies.

Every weekend, eight-year-old Akshat Parashar wakes up early morning at 6, brushes his teeth, almost gulps a couple of bananas, puts on his jersey No. 24 and is on his way to the ground. Contrary to the usual eight-year-old, Akshat is not a fan of playing games on a cell phone, neither is he keen on eating out a lot. He is driven by just one passion, cricket.

Passion is a strong word for an eight-year-old, but looking at Akshat going about his drill makes one wonder how a young kid, in an era dominated by gadgets and fast food, is consumed by one sport. It may baffle you to know that Akshat began coaching at the PUSH Cricket Center of Excellence in Gurugram as a legspinner, as a six-year-old. One month short of turning nine, Akshat has four centuries and an average of 78.34, the best among his age group.

This is just one of the many advantages of the PUSH Centre for Cricket. The centre is located on a secluded piece of land, interiors of new Gurgaon, where infrastructure is still on its way. Yet, the academy boasts approximately 250 students, most of whom belong to the Under-12 category. In just four years, PUSH has gained a reputation on par with the leading cricket academies across Delhi-NCR Madan Lal Cricket Academy, Sonnet cricket club, West Delhi Cricket Coaching to names a few.

“It’s been more than 2.5 years with PUSH,” Ashutosh, Akshat’s father says. “I have only seen him improving every day, every game, through a lot of matches played. Overall if you see the coaches to student ratio, it’s really great. Coaches know each and every kid strength and weakness. I’m sure there are number of academies in Delhi NCR, but I am hooked to this because personal attention is very detailed.

“Akshat joined when there were 13 kids in the academy. Eventually they started playing with tennis ball, soft throw balls and now leather balls. When you see the kids improving, you feel why change. He used to be an offspinner who could bat decently, but it today one of the best young players here,”

Along with attention to detail, PUSH is already shaping its young players into stars, with an IPL auction-like initiative. The players, based on their skillset, are allotted a base price and in every six months, an auction process is held. Of course, there is no money involved but barring that, there isn’t too much different. Eight teams are formed within the academy, and certain parents, acting as franchise representatives, except their own kid, have a pick.

Besides, the academy has over 10 coaches for various age-groups and maintains statistics of every player. To maintain numbers of over 250 promising kids, including runs, strike-rate, economy is no walk in the park but that’s where the state-of-the-art facilities come to light. TV monitors, slow-motion replays, graphic and pictorial representation ensure kids are treated like professional cricketers. Coaches at PUSH also chalk out a detailed diet chart as per the individual’s health, which amazingly, most kids follow.

“We got to know about this. I think it’s been a fabulous experience for us. No matter how good this academy is, there are still certain things which are different than other clubs. The fact that the coaches here remember the names of all the 250-300 kids is commendable,” Deepanshi Jaiswal, mother of Aditya Jaiswal, tells India.com.

“Aditya is a legspinner. He’s been here for almost two years now and his game has definitely improved. There’s a lot of self-discipline been inculcated too. Aditya was very much a soccer person and it was all of a sudden that he had his cult towards cricket. I hope it stays for long. Overall conduct and professionalism is more important. To be able to learn the sportsmanship, as well as the life skills. Taking care of your own nutrition.”

The academy invited renowned coach Peter Wellings as a star attraction. Wellings is a former England First-Class cricketer with three decades of coaching experience behind him. He has imparted knowledge all over the world even countries where cricket is not fully recognised as a sport. In town for a five-day long camp, Wellings struck such a wonderful chord with the kids that on their persistence, the 50-year-old extended his association with PUSH for a second stint.

“I have travelled the world for 27 years and this place has already taken a special place in my heart. There’s a good vibe here; the kids are nurtured and looked after. Me coming in slotted seamlessly. Push is a good place, I like it.” Wellings, who played six FC games for Middlesex between 1996-97, says.

“In the world of sport, I think there is more expectation on kids who’re growing up this day and age. I don’t see parents cutting their kids slack when they stumble. Just back off from the kids. Young bunch 7 to 10 if you nurture the love of the game and you help your children develop, you’ve done the biggest favour for them. We need to see our kids outside the homes and that is another message for the kids here.”

Besides kids, Wellings also connected with the parents on a personal basis. He discusses their strengths, weakness, growth and needs as per every child.

“The coach is 50. The kind of energy he has, training for 8-9 hours during weekdays and weekends, till the end keeping on toes. Kids are not at all tired, they can stay awake all night. It’s been a very good experience. He should be called quarterly and there are parents like us who’ll be looking forward to him coming,” Deepanshi says.

PUSH is striving for excellence. Its motto is not just to create cricketers, but professionals who are likely to cement the future of Indian cricket. The academy is expected to gain a stronger foothold in the coaching circuit in coming years, and considering the rapid stride its making, PUSH can lead the future generation of cricketers in India. 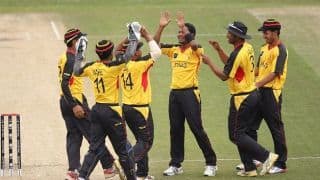