Rahat Ali had just played one ODI prior to the ICC Cricket World Cup 2015.

Not considered a One Day specialist and initially overlooked by the selectors when they announced the 15-man squad to represent Pakistan in the ICC Cricket World Cup 2015, the twenty six-year old pace bowler Rahat Ali now finds himself as an integral part of the Pakistan team as it prepares to meet Australia in Friday’s Quarter Final in Adelaide.

In an exclusive interview with PakPassion.net, Rahat spoke on a variety of topics including his belief that he would eventually join the Pakistan World Cup squad, the role played by the Pakistan team management in ensuring that the morale of the team did not suffer due to the defeats against India and West Indies, his first game against Zimbabwe in the World Cup and the commitment and focus of the team ahead of the Quarter-Final against Australia.

PakPassion.net (PP) : Not many people thought you would be named as the replacement for Junaid Khan. It’s been quite a few weeks for you hasn’t it?

Rahat Ali (RA) : First of all, I must thank the Almighty that although it was a little late in coming, at least I made it to the World Cup squad. I have to attribute that to the prayers of my parents and to the hard work I was putting in, including my efforts in the matches I was playing for my department, KRL, in which I was performing well, ahead of the World Cup. The Almighty gave me a chance to play for Pakistan. I guess it was my destiny and I am feeling good about my performances here at the World Cup so far and I will continue to put in my maximum efforts for Pakistan and hope that we can at least get to the final of this tournament.

PP : Your entry to the ICC Cricket World Cup 2015 is quite a story isn’t it, having only played one ODI prior to the tournament?

RA : Yes absolutely. If you recall, my name wasn’t even in the list of 30 probables which was announced in early December. However I did not lose hope and put in some good performances in the Pentangular Cup which was in progress around that time, in the hope that I could avail myself of any chance there was of joining the squad. In that scenario you should never give up hope as you never know what may be around the corner.

It just happened that the selectors were watching some of the matches I was playing and with Junaid Khan unfit to travel with the World Cup squad, I started to feel that there was a possibility that I could still make it to the squad. I was obviously elated when that possibility became a reality and I was named as a replacement for Junaid.

PP : Coming to the World Cup itself, what was the morale like in the team after the two consecutive losses and how did you cope with your time on the sidelines in the initial group games?

RA: We may have lost those games but one must give credit to our team management, coaches and captain who did not let those losses effect our morale. There was no negative talk of any kind and the kind of support we as a team got was as if we had actually won those games, which was amazing for us. That is the kind of attitude that has brought us to the Quarter Finals.

We worked hard and kept our focus to get to this stage. Of course, in the beginning, it did take us a little longer to get used to the conditions here. I didn’t play the first two games but that wasn’t entirely disadvantageous for me as it didn’t stop me from observing and thinking about how I would bowl on these wickets when I was watching the matches from the bench.

PP: When, eventually, you got the first opportunity to represent Pakistan in the game against Zimbabwe, what emotions were going through your mind and did you feel any extra pressure to perform?

RA: There was no real pressure but there was definitely the will to perform for my country. Luckily I already have experience of playing eleven Test matches over a period of two years so I am used to playing in international games, and I really didn’t feel tense due to the crowd or due to playing in an international game. All I wanted to do was to make the most of this chance and not miss this opportunity to perform at the highest level. I am glad that the Almighty helped me in achieving this goal and I am hoping that we will all continue to perform at this level and be able go far in this tournament.

PP: We are seeing bouncers being used more often and to good effect by Pakistan bowlers in this World Cup. What is the objective behind this strategy?

RA: Most teams in the World Cup are employing this tactic of using bouncers as both a defensive and aggressive option. This is because Australian pitches have a little more bounce compared to Asian pitches. The idea behind this strategy is not to allow the batsmen to get set and adjust to the wicket and not to be predictable as a bowler. It’s all about keeping the batsmen on their toes and to not let them predict what the bowler will be bowling. The problem is if a batsman gets settled, then it becomes very difficult to remove him. This is why we are using bouncers more often than we normally would.

PP: In a World Cup tournament where scores of 300-plus are being scored at a frequent rate, you have managed to keep your economy rate just above four which is quite remarkable. How do you feel you have you managed to achieve that?

RA: I have a very simple plan. I bowl wicket to wicket and try and anticipate what the batsman is planning to do on the next ball. I try and out-think the batsman and like I said, I try and bowl stump to stump. In doing that, I get a little help from the surface and get some swing both ways as well, which helps in achieving a good economy rate.

PP: You mentioned the fact that you do depend on swinging the ball. What would you attribute your ability to bowl both inswing and outswing? Is this a natural ability or something you have worked hard to attain?

RA: It’s a bit of both. I have worked very hard to polish this skill which isn’t an easy skill to master. I have also been helped by our coaches, in particular Waqar Younis and Mushtaq Ahmed as well as Mohammad Akram at the NCA; all of them have put in a lot of work and effort with me. Even during the off-season or between tours, I work very hard and am given a plan of action and this shows in the way I am able to develop skills to bowl both inswing and outswing with good effect. It is always my intention to stay focussed on my bowling and to bowl wicket to wicket as that is the most effective way to stop the flow of runs and helps in maintaining a good economy rate.

PP: How would you describe the experience of working with a great bowler like Waqar Younis as your coach?

RA: It’s been a wonderful experience. There is so much that I have learned from Waqar. Not just me, but all of us are always looking to learn more skills from Waqar. He is a legendary and experienced bowler and we cannot get enough of his advice which we then look to apply on the field and the results of that are for all to see. Personally speaking, Waqar Younis has been an inspiration and great help for me. I am indebted to him for his advice and can’t thank him enough for his help and guidance.

PP: Do you feel that you have answered the critics of your selection who suggested that that you are a Test bowler and not suitable for the One Day format?

RA: Yes, there was a question mark on my ability to perform in One Day games as prior to the World Cup I had no performance of note in the fifty over format for Pakistan. I was aware of this criticism and I came into this tournament with a plan in my mind and, to bowl in a manner that is needed for this format of the game. God willing, I will try and bowl even better in the upcoming matches.

PP: The news that Mohammad Irfan is out of the World Cup due to injury must have been devastating for Irfan and the rest of the squad?

RA: Undoubtedly, he is our main bowler and he puts fear in the minds of all batsmen around the world. We will have to manage without him and we did win a game without him against Ireland but the fact is that we will miss his presence. He is a one of a kind bowler and someone who can prove to be troublesome for any batsman in the world. He’s devastated at having to miss the rest of the World Cup, however we will do our best against Australia without Irfan in the side and try to win the match for him.

PP: What will be Pakistan’s bowling strategy and focus for the upcoming game against Australia?

RA: Every bowler is given their own plan to work with in such games. The coaches sit us down and show us the strong and weak points of each batsmen. The idea, obviously, being not to bowl to a batsman’s strong areas. We have been planning for the match against Australia and we have a few days ahead of us and we will sit down and further plan our strategy. That is in addition to the regular on-field drills and practice that will do in preparation for this game. All I will say is that we are focussed and committed to performing to our best in this game.

PP: With four consecutive wins in the bag, Pakistan must feel that the momentum is with them as they head for the Quarter Final against Australia?

RA: We are feeling very confident, especially now that we have won four games on the trot. I would say that it was the victory against South Africa that really gave our confidence a boost and convinced us that we can beat any team in this tournament. That game also allowed us to come together and combine into a well settled combination which has held itself well in the other games that we played afterwards.

I feel that as a result of our victories, the other teams are starting to fear us as they know that we capable of defeating any team. We feel no pressure for the upcoming game against Australia and will play and enjoy our game regardless of the opposition. 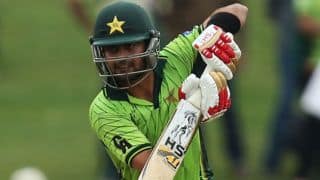