As news broke of his retirement from all forms of cricket on Friday, a tide carrying fitting tributes of the masterful heroics ofIndia’s Rahul Dravid swept unabated through the cricketing world. 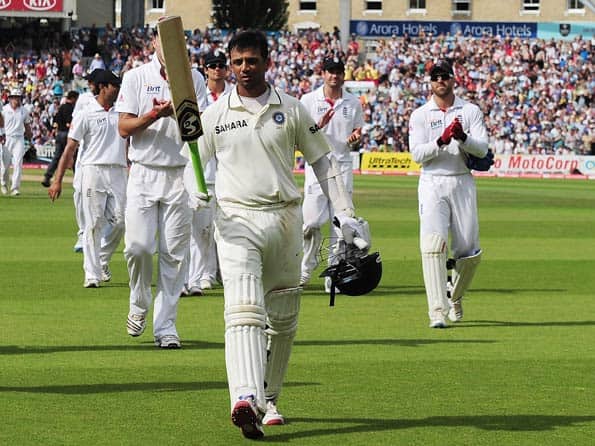 As news broke of his retirement from all forms of cricket on Friday, a tide carrying fitting tributes of the masterful heroics ofIndia’s Rahul Dravid swept unabated through the cricketing world. Amongst the flotsam of such a rip-roaring tsunami are boundless statistics that never cease to amaze. The most Test runs for a No 3, more balls faced than any other batsman in the history of Test cricket, 58% of Test centuries scored overseas…

This article reminisces the genius of Dravid on English soil.

England has never been the happiest of hunting grounds for India’s batsmen. Indeed, overseas tours in general haven’t. Between 1986 and 2000 India, in 48 attempts, managed just one overseas Test victory. Dravid’s accomplishments appear all the more impressive for this statistic, given that it covered some part of his early career.

The English cricketing fraternity are largely traditionalists, allowing for all the greater appreciation of the stoic qualities oft exhibited once Dravid strode to the crease. The sight of that immovable straight blade is one we have become all too familiar with over the years. Yes, at times it frustrated, but was always atoned for by bringing us Test cricket in its purest sense. Perhaps fittingly, Dravid’s defiant last stand on English soil amidst the most fragile of Indian batting line-ups, combining poise and class with a sturdy resoluteness that only he was capable of in a series in which he averaged 76.83 despite not winning a single Test, has left a lasting memory of just how much Test cricket, and English fans, will miss this king of batsmen.

Averaging a lofty 68.80 with six Test centuries in England across his career, here are five of Dravid’s best:

Commencing their second innings with a huge deficit of 260, India faced an uphill battle to save the second Test at Nottinghamand avoid going 0-2 down in the series. India’s magnificent triumvirate of Dravid, Sachin Tendulkar and Sourav Ganguly put together vital middle-order partnerships after the early losses of openers Virender Sehwag and Wasim Jaffer, with Dravid alone of the Indian batsmen going on to reach three figures. Made in 244 balls, Dravid’s 115 in the face of high class fast bowling from Matthew Hoggard, Andrew Flintoff, Steve Harmison and Dominic Cork and was a master class in obdurate defensive batting, allowing India to eventually save the Test.

Following England’s impressive first innings total of 474 for eight declared, India in reply crumbled to 286 all out. With no other Indian batsman passing 50 Dravid, opening in place of the injured Gautam Gambhir, carried his bat through the entire innings to be left stranded on 103 not out. Showing immense grit and technical skill in the face of high quality swing bowling that was perhaps his career trademark, Dravid frustrated England as his teammates fell around him. A master class in every sense of the word, this is a must see innings for any youngster learning how to bat against swing bowling.

India’s imposing first innings total of 628 made a mockery of what were actually testing conditions on the first day of the third Test at Leeds. Described by then England captain Nasser Hussain as one of the finest centuries he had ever seen, Dravid amassed 148 runs as only Dravid could; watching each ball with all the patience of a waiting heron before striking whenever England’s bowlers strayed in to his preferred areas. Shrugging off blows to the chest, shoulder and helmet with barely a flinch, Dravid set the platform from which teammates Tendulkar and Ganguly could unveil their full array of masterful strokeplay against an ailing England attack en route to achieving India’s first overseas innings victory since the late 1970’s.

With their toothless bowling attack being put to the sword yet again during England’s first innings 591 for six declared, India’s batsmen found themselves staring down that all too familiar barrel. Again, Dravid was the only Indian batsman to pass 50. Opening once more, Dravid carried on where he left off at Lord’s and went unbeaten throughout the innings as his teammates capitulated, displaying those same powers of concentration and infallible technical ability to repel England’s relentless swing attack. Unfurling numerous exquisite drives with typical Dravid grace and poise, this titanic innings makes it in to second place.

The No 1 one spot is reserved for Dravid’s sole double hundred on English soil. Following England’s mammoth first innings total of 515 in which Michael Vaughan made a sublime 195, India had to bat big and bat long to stand any chance of saving the fourth Test and thus the series. Dravid, with the aid of those same old accomplices Tendulkar and Ganguly, did just that. Eclipsing Vaughan’s effort, ‘The Wall’ went on to spend over ten hours at the crease, making 217 in a colossal 468-ball vigil to ensure that India left England with a share of the spoils. Unfurling a mercilessly dead bat, and with barely a false stroke to speak of on a turning pitch, Dravid crawled to a third successive Test century. Frustrating, dull and without ambition; this was the type of innings that Dravid revelled in. Quite simply, he loved batting, loved making the opposition toil, and loved to score runs. Here, he fulfilled those criteria, and in the context of the match it proved the perfect innings. Vintage Dravid, and conclusive evidence that there has rarely been a better batsman for all conditions.

Throughout these five chosen innings, Dravid frustrated England like no other, but he begrudgingly won the admiration of connoisseurs of Test cricket. International cricket will be a lesser place without the eloquence, professionalism, class and sportsmanship exuded in spades by ‘The Wall’, but here in England the memories will endure. There really is, to quote Sachin Tendulkar, only one Rahul Dravid.

Rahul Dravid’s 217 against England at The Oval 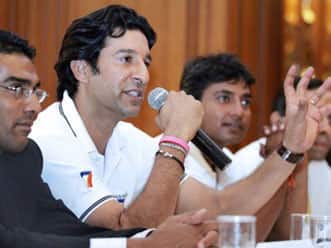