Rahul Dravid, the epitome of textbook batsmanship, will never grace Test cricket ever again. The headstrong temperament, controlled aggression and extraordinary technique were some of the qualities that defined Test cricket’s second highest run-scorer. VVS Laxman (left) and Rahul Dravid of India leave the field at the end of play after batting the entire day, after day four of the 2nd Test between India and Australia played at Eden Gardens. The epic partnership was not just one of the greatest moments in Indian cricket but in the history of Test cricket itself © Getty Images

Rahul Dravid, the epitome of textbook batsmanship, will never grace Test cricket ever again. The headstrong temperament, controlled aggression and extraordinary technique were some of the qualities that defined Test cricket’s second highest run-scorer.

Throughout his career, “The Wall” stood tall in the face of adversity and scripted epics that typified resilience and the burning desire to succeed. He leaves behind a legacy in which India touched dizzying heights and pulled off some memorable Test victories.

Kolkata 2001 was relived Down Under as Dravid and VVS Laxman combined to inflict misery on Steve Waugh’s Australians on their own territory. Having scored 556 at the back of Ricky Ponting’s double, the hosts looked firmly in control of the game. When India were reduced to 85 for four, that grip became even stronger. However, if Kolkata was Laxman’s stage, Adelaide became Dravid’s party. The cover drives, the shots square on the off side bore testament to his class as he didn’t get bogged down by the reading on the scoreboard. He reached his hundred with a six, double hundred with a four; moments that signified India’s fight. His 233 and Laxman’s 148 took India within 33 runs of Australia’s total. After that, Ajit Agarkar’s dream spell limited Australia to 196. Chasing 230 for a win, Dravid was in the act again with a match winning 72 not out. It was only too apt that he hit the winning runs to seal a memorable moment for Indian cricket.
2. 180 vs Australia at Kolkata, 2nd Test, March 11-15, 2001

In his book, Indian Summers, John Wright refers to the Kolkata Test of 2002 as “The Greatest Comeback since Lazarus” and rightly so. India were dismissed 274 runs shy of Australia’s first innings total when Steve Waugh enforced the follow on. Indians tweaked their batting order a touch as Laxman walked in at number three and Dravid had to drop down to six. They came together at 232 for 4 when saving the game was still the primary objective. However, on day four, the duo turned things around and frustrated the Aussies by batting the whole day. Dravid battled cramps and dehydration while playing the support role to Laxman. When he reached a hundred, he gestured in an uncharacteristic angry manner which just indicated how much the moment meant to him.

On a seaming track at Headingly, in typical English weather conditions, Sourav Ganguly’s decision to bat first was received with surprise and astonishment. Virender Sehwag’s early dismissal may have strengthened the claims of the sceptics but Dravid put all those fears to rest. Along with Sanjay Bangar, he dealt with the tricky conditions in a stoic manner. It was a great exhibition of technique and a lesson on dealing with the moving ball. Dravid was stumped two runs short off his 15 but had laid a solid foundation for Sourav Ganguly and Sachin Tendulkar to dominate proceedings. India won that Test by an innings and the man-of-the-match went to Dravid for his defining knock.
4. 81 and 68 vs West Indies at Jamaica, 4th Test, June 30- July 2, 2006

India had dominated most parts of the Test series in the Caribbean, failing to finish close matches on two occasions. The pitch at Sabina Park for the final Test match had something for all the bowlers. It was the kind of a pitch where the fast bowlers could get bounce from certain areas and the spinners could turn it a long way. On that tricky surface, Dravid lived up to his titleand stood firm between the stumps and the bowlers. As wickets tumbled at the other end, Dravid displayed his class and showcased his defensive technique. The unpredictable nature of the pitch was dealt with the straightest of straight bats. Both the knocks spoke volumes not just of his quality but also his strong mindset. In the second innings, when Dravid was bowled by Collymore off a delivery that kept really low, the television cameras showed a wall with a brick missing. It symbolized Dravid’s effort in that game as the bowlers had very little chance of finding that small hole in “The Wall” even though the conditions were in their favour. His efforts paid off as India won by 49 runs on day three.
5.  112 vs West Indies at Jamaica, 1st Test, June 20-23, 2011

The track at Jamaica had its demons but not as scary as the ones of 2006. Yet, it required the skill of Dravid to put India in a match-winning position. Going into the second innings India led by 73 but lost a few quick wickets. It was imperative for Dravid to guide the innings and bat throughout. Even as wickets fell at regular intervals, Dravid’s knock kept the West Indians at bay. The knock invoked memories of his previous visit and it marked the return of the Dravid of the old. A late partnership with Amit Mishra extended India’s charge and put it beyond the hosts’ grasp. That innings kick-started a brilliant run of form for Dravid which extended throughout the year 2011.

With the series locked at 1-1, the two teams looked to battle going into the final Test at Rawalpindi. The whole tour was a historic event as it resumed the once strained cricketing ties between the two neighbours. The Indians dismissed Pakistan for 224 but dealt an early jolt when they batted as the in-form Sehwag was out first ball. Dravid, who hadn’t done much of note during the series walked in with typical determination to play a long innings. He dealt with the tricks in the surface and struck crucial partnerships with the middle order. There were times when he was watchful but accelerated at regular intervals. With 600 on the board, India could force the initiative and clinched the historic Test series 2-1.
7. 148 vs South Africa at Johannesburg, 3rd Test, Jan 16-20, 1997

Dravid had burst on to the scene during the England tour of 1996, but was yet to achieve his maiden Test ton. That occasion came at Johannesburg as he scored a gritty 148 in the first innings, tackling the might of Alan Donald, Shaun Pollock, Lance Klusener and Brian McMillan. That knock gave a glimpse of what was to come as he batted throughout the innings – a feat he has managed on more occasions. He wasn’t finished there as he smashed 81 in the second innings which left South Africawith 356 to win. South Africa were on the mat at 228 for eight until the weather gods intervened to deny India an overseas victory.
8. 190 and 103 vs New Zealand at Hamilton, 3rd Test, January 2-6, 2006

In a batting fest at Hamilton, Dravid was at his dominant best as he stroked 190 in the first innings to help India overhaul New Zealand’s 366. The real test came in the second innings when India were two down for 55, chasing an out-of-reach 415. The Test was heading to a draw but Dravid and Ganguly had to ensure that there weren’t any hiccups along the way.  The second innings hundred was even more dominating as he scored his 103 runs at a strike rate of over 75, astronomical when one consider his usual rate of scoring in the longer version. These knocks may not be as special as the ones at Headingly orAdelaide but to score two hundreds in the same match is truly monumental. That put him in the league of Indian greats such as Sunil Gavaskar and Vijay Hazare.
9. 110 and 135 vs Pakistan at Kolkata, 2nd Test, 16-20 March, 2005

Pakistan had shown great fight in the previous Test by saving the game from a hapless situation. The hosts were wary of the challenge up against them and Dravid’s two centuries set the tone for a huge win. In the first innings, he mixed caution and aggression to take India to 407. Yousuf Youhana (as Mohammad Yousuf was known then) and Younis Khan led Pakistan’s fight with centuries. India had a slender lead of 14 runs and the onus was on their batsmen to set the game. The challenge was sterner this time around as India found themselves in a precarious position at 156 for four. From that point onwards, Dinesh Karthik and Dravid struck a huge partnership of 165 to put India in a commanding position. The twin tons at Hamiltoncame in a drawn affair but the table turned six years later as India wrapped up a comprehensive win over their arch rivals.

A previously unknown Sri Lankan pacer, Chanaka Welegedara rattled the Indian top order on the first morning at Ahmedabad. Gautam Gambhir, Sehwag, Tendulkar and Laxman were back in the hut in no time leaving Dravid with the task of batting with the middle and lower order. Along with Yuvraj Singh, Dravid started a counter-attack to put pressure on the Lankans. His knock was full of fluent strokes and once the conditions eased, he opened up and unleashed an array of aggressive shots. It wasn’t just the shots he played, but it was the way he executed them that made it memorable – with a sense of domination and panache. This innings may not be very memorable in context of the result of the game, but considering the situation India were in, it was a fantastic effort. 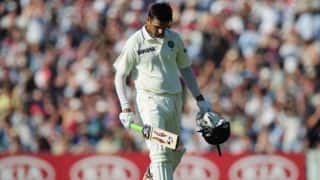 Rahul Dravid retirement: End of an era as the symbol of stability, bows out