Rahul Dravid has scored over 23,000 international runs for India.

Rahul Dravid, born on January 11, 1973, is one of the greatest batsmen to have played for India. With over 24,000 international runs, he is only behind Sachin Tendulkar for India. He is also one of the most respected figures in the country across professions. Dravid symbolised the ‘nice guy’ and his pursuit of excellence in a 16-year-long international career that saw him walk into greatness.

Having grown up and lived in Bangalore, many tend to believe that Dravid hails from Karnataka. In reality, he is from a Marathi-speaking family. Dravid was born to Pushpa and Sharad in the city of Indore in Madhya Pradesh. Interestingly, the Dravids actually hail from Tamil Nadu and their ancestors had settled in Maharashtra.

2. Father’s passion rubs off on the young boy

Dravid has often spoken about his father Sharad’s role in introducing him to cricket. The young Dravid would often accompany his father to cricket matches and there began his love affair with the game. In fact, journalist Sidhanta Patnaik has an interesting story on his blog. Dravid was born on January 11, 1973, when India and England were playing a Test match in Chennai. Even as his wife and new born son lay in bed in the hospital, Sharad Dravid ensured he did not miss out on the cricketing action and followed the proceedings on radio. No wonder, Dravid grew up to be so passionate about cricket.

3. First glimpse of the hero — a heartbreak

As any young aspiring cricketer growing up in India in the 1970s, Dravid admired and idolised the great Sunil Gavaskar. In 1978-79, India were playing the West Indies in Bangalore when the five-year-old Dravid was taken to the stadium by his father. In an interview with Boman Irani on Star World, Dravid said that he was eager to watch Gavaskar bat, but to his disappointment, the great opener was out first ball, dismissed by Sylvester Clarke. But, a few years later, Dravid watched Gavaskar score a ton in Bangalore and that made up for that failure.

4. Crying on losing his wicket

At a young age, Dravid started playing serious cricket. Perhaps he took that seriousness a bit too far when he once lost his wicket as a 13-year-old. Dravid cried immediately. Speaking to Verve, Dravid said, “It was most embarrassing, I was just 13 and I cried all the way back to the dressing room.” In his long international career, Dravid has expressed his disappointment at being dismissed only a few times, which speaks volumes of his exemplary temperament.

Though Dravid’s mother Pushpa was an architecture professor, she is also an artist. She has hosted numerous exhibitions where her paintings have been put up for public view. Also, the murals of cricketers on the main building at the M Chinnaswamy Stadium, Bengaluru, have been designed by her.

When India had a long lay-off in 2003, Dravid used that time to play for Scotland in the summer. During his stay there, he played in numerous games, most notably against the touring Pakistanis, against whom he got a duck. However, he had a good experience there, so much so that he said, “It’s a beautiful part of the world. It’s a lovely country. I intend to buy a kilt before I leave and I’ll probably wear it at home in Bangalore.” In 2007, when India played Scotland in a One-Day International (ODI), Dravid knew most of the members of the opposition. In fact, some of his Scottish teammates were unimpressed by his driving. Dravid told the BBC, “The problem is I stick to the speed limits.”

Dravid is normally a very calm and quiet person. He does not vent out his feelings, but there are the odd occasions when he has lost his cool. During the tour to Pakistan in 2004, he had famously said after a journalist asked him about match-fixing at a press conference, “Someone get this guy out of the room. It’s ridiculous. These sort of statements are just bad for the game.” On another occasion, Dravid had thrown a chair in the dressing room in anger after England had beaten India in Mumbai in 2006. This was told to his Vijeeta by Virender Sehwag, something she wrote in her article for cricinfo.
8. Birth of sons

When Dravid’s first son, Samit, was born in 2005, he could not be with his family as he was Down Under playing for the ICC World XI. However, four years later, in 2009, he flew down to India in the middle of the Indian Premier League (IPL) in South Africa, to be with his wife for the birth of his second son.

During the ICC World Cup 2007, Rahul Dravid was India’s captain. Unfortunately for him, India had a disastrous campaign, beginning with a defeat to Bangladesh. It was a crushing blow to India’s dream at that World Cup in which three teenagers, Tamim Iqbal, Mushfiqur Rahim and Shakib Al Hasan, starred for Bangladesh. The gentleman that Dravid is, he was effusive in his praise for Tamim, who opened the batting. Dravid summoned him to his hotel room after the match and gifted him a bat from his kit. He also handed him a second bat and asked him to present it to Mushfiqur.

10. Connection with the club

Even after retirement from Test cricket in 2012, Dravid continued to play for his club Bangalore United Cricket Club (BUCC) for over a year. Even though his club was relegated to the second division, he would turn up to play despite the small grounds and unsophisticated conditions. One of the players in one such games wrote for Wisden India, “He gave a few of his teammates bats. He gave the guy who scored a century a pair of gloves. He ate with the team, drank water and was like just another cricketer plying his trade on the club circuit.”

This article was first published on CricLife.com

Michael Clarke: Will it be a bridge too far for the Australian captain? 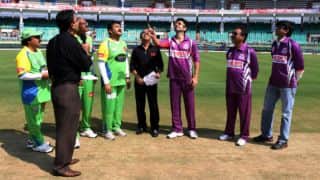