Chaminda Vaas is the only one to take 8 wickets in an ODI, though quite a few have done it in List A cricket.

November 8, 1997. Playing against Himachal Pradesh in the nondescript town of Una, Rahul Sanghvi made his way to the record books with the best ever List A figures. Abhishek Mukherjee looks back at a rarely mentioned world record that still stands.

Chaminda Vaas had claimed 8 for 19 against Zimbabwe at SSC, Colombo, in 2001-02. He might have taken all 10, had Muttiah Muralitharan not been introduced. Zimbabwe were reeling at 37 for 8; on came Murali, and removed the last 2 wickets in 4 balls. Vaas never got there, as did nobody else.

No other bowler has taken 8 wickets in an ODI, though there were a few in List A cricket. Keith Boyce was the first to reach there with 8 for 26 against Lancashire at Old Trafford in 1971; Derek Underwood was the second, claiming 8 for 31 against Scotland at Edinburgh in 1987; the next season saw Michael Holding run through Sussex at Hove with 8 for 21.

Almost 10 years had passed since Holding had bettered Boyce’s feat when Delhi toured Una to play Himachal Pradesh. Though Una was a picturesque city straight out of a postcard, Indira Gandhi Stadium was not the largest of grounds.

The Himachal Pradesh bowlers kept the tourists on a leash after Rajeev Nayyar decided to field. Raman Lamba used all his experience to score an uncharacteristic 76-ball 40 in 2 hours. Nikhil Chopra (33 not out) was the only other batsman to put up some resistance, and Delhi finished on 173 for 9.

Shakti Singh, Parveen Sharma, Aseem Kumar, and Jaswant Rai bowled 40 overs between them, finishing with 6 for 111. Had Himachal Pradesh had a good fifth bowler, they may have restricted Delhi in the 140s.

It was not an easy target, for Delhi had 5 international bowlers (past, present and future) in their ranks — Ajay Sharma, Chopra, Sanghvi, Robin Singh jr, and Amit Bhandari. Himachal Pradesh were on 31 when Bhandari drew first blood, clean bowling Sharat Sharda, but they still had Nayyar to contend with.

Nayyar was the ubiquitous stone-waller. Two years after the match he would bat for 1,015 minutes (still a world record) against Jammu & Kashmir at Chamba. He was not the fiercest of hitters, but the situation asked for a calm head.

Sanghvi removed Nischal Gaur. Out came the dangerous Shakti, and hit a six soon afterwards. Unfortunately, he was run out for 10. Himachal Pradesh were 57 for 3. Sanghvi had taken only one of them.

Five balls later, Jasminder Singh was stumped. Nayyar was batting cautiously, watching the collapse at the other end. The hosts’ resistance ended when Sanghvi had Nayyar caught by Ajay Sharma for a 32-ball 8. Chetan Kumar was bowled shortly afterwards.

The collapse continued. Rai was caught by Ajay Sharma. Raj Kumar was caught by Bhandari. When Aseem Kumar gave Ajay Sharma his third catch, statisticians suddenly took notice: could Sanghvi emulate Holding’s world record? He still had 4 balls left in his last over, and had taken 7 for 15…

He needed 3 deliveries. Parveen kept out the first 2, but his feet were outside the crease in the next ball by the time Davendra Sharma whipped off the bails. Sanghvi’s name was etched into record books, and continues to remain at the top.

Vaas (8 for 19, mentioned above) came closest to emulate Sanghvi. The only other man to have gone past Holding is Tharaka Kottehewa, the Ragama bowler who routed Nondescripts with 8 for 20 at Colombo in 2007-08.

Sanghvi topped the bowling charts that season, with 16 wickets (nobody else managed more than 12) at 10.18.

Sanghvi was given his ODI cap 2 months later. He played 10 ODIs in all, and claimed 10 wickets at 40 and an economy rate of 4.80. Four of these were tournament finals, and though he did not get a lot of wickets, he did a tidy job with the ball.

Sanghvi also played a solitary Test — against Australia at Wankhede in 2000-01. He took 2 wickets. India lost by 10 wickets. Harbhajan Singh claimed 28 wickets from the next 2 Tests. Anil Kumble came back. And Sanghvi never played another Test.

Lamba passed away just over 3 months after the match. 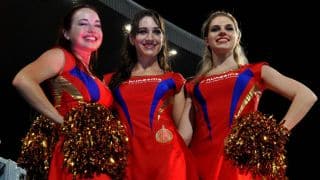 IPL 2015: An unpredictable but exciting tournament so far