Ramesh Rajde remembered — a touching tribute from a close friend

Ramesh Rajde remembered — a touching tribute from a close friend

Almost 10 years ago, Ramesh Rajde, an outstanding cricketer, dear friend and above all a noble soul, was snuffed even before medical aid could arrive. Ramesh was just 51 years of age.

Almost 10 years ago, Ramesh Rajde, an outstanding cricketer, dear friend and above all a noble soul, was snuffed even before medical aid could arrive. Ramesh was just 51 years of age.

En route to Nhava Sheva, I received a couple of calls informing me of the tragedy. Shocked as I was, it was hard to believe as we had met the previous evening on his return from a vacation to Panchgani. When we said goodnight, little did I know that it would be his final goodbye.

Acknowledged as an exceptional swing bowler, Ramesh foxed several technically, well-equipped batsmen with his guile, craft and control. As members of the Podar College, Mumbai University and Mumbai U-22 squads we toured several places, shared the same dressing room and thus became close friends. The bonding strengthened with passage of time.

Ramesh gradually developed his batting skills and soon revealed that he was a lethal combination of high-octane batting and incisive, laser-sharp bowling with an astute cricketing brain. In the outfield, he was like a panther on the prowl. It was therefore no surprise that his employers Mahindras elevated him to lead a star-studded team that included the likes of Pandurang Salgaonkar, A. Khurana, Kiran Mokashi — all First-Class cricketers —  besides several other immensely-talented lads. To find a place in the Dadar Union playing XI In the 1970s & ’80s,a team that boasted legendary names like Sunil Gavaskar and Dilip Vengsarkar, was testimony to Ramesh’s prodigious talent. And he served the club with distinction.

Unfortunately he belonged to an era when Mumbai fielded an array of big names like Gavaskar, Vengsarkar, Karsan Ghavri, Abdul Ismail, Padmakar Shivalkar, Ajit Naik, Ramnath Parkar… the list is endless. However, Ramesh was the quintessential Mumbai cricketer with the ‘never-say-die’ attitude. Not once did he contemplate moving to another state; Mumbai cricket was where his heart belonged. Having sought voluntary retirement from Mahindras, he served with the Apte group till that fateful day when he was snatched from our midst.

Ramesh was fantastic company. Loaded with anecdotes, he would keep us riveted and enthralled. Not once commenting on his personal achievements. He was humility personified. Saturday evenings were spent over spirits and guffaws and the pack would later dine at various restaurants. Ramesh relished seafood and devoured. It with the same pleasure that he derived when he accounted for those innumerable scalps on the cricket field.  Our outings to Lonavala, Madh and Marve with friends, and the bonhomie that we enjoy is etched in memory. It will always be cherished.

Extremely passionate of his 1965 model Java motor cycle, observing him desperately trying to kick start the antique tw-wheeler had the boys rolling with laughter. In a lighter vein, Ramesh would debate authoritatively on any topic on Planet Earth thereby keeping us in further splits. Soft-spoken and blessed with a calm countenance, he never felt offended anyone nor did he ever speak with rancor or recrimination. Even to this day, after over two decades, the Vazes, Mhatres and Reges fondly recall him playing around and looking after their toddlers on holidays. Ah, what a sweetheart he was!
In Mumbai, the first call Anshuman Gaekwad would make was to Ramesh. After his demise, I requested Anshu to give me a buzz when he next visited Mumbai, to which he politely replied, “there is nothing to look forward to in Mumbai”.

In his passing away, a mother lost a loving son, siblings a beloved brother, the cricketing fraternity a true fighter and his friends a wonderful companion.

Ramesh had the panacea to all problems, yet ironically when he collapsed at his residence, he couldn’t reach a hospital. Strange are the quirks of fate, queer the vicissitudes of fortune.

On August 29, 2005, Ramesh was transported to the Elysian Fields. However he would have loved that to be replaced by a maidan. The crematorium was bursting at its seams as a sea of humanity descended to bid farewell to Ramesh. Such was his popularity. That’s how endearing he was to friends and acquaintances alike.

Upstairs in the celestial pavilion, his banter with Satish Mane and Avi Kamerkar will be a million dollar eavesdrop.

In his memory, dear friends Vijay Chougule and Anushman Gaekwad and his well-wishers founded the ‘Ramesh Rajde Trust for Young Sportspersons’ which annually felicitates budding talent in the U-14, U-16 and U-19 categories even conferring the deserving with scholarships. This year the function is today at the Shivaji Park Gymkhana at 4.30 pm.
Dearest Ramesh, you continue to live in our hearts and you will forever be missed. Rest in peace, my friend. 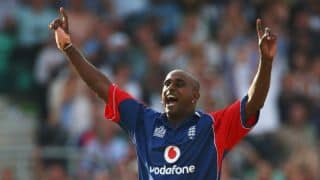 Sharjeel Khan: My best is yet to come in international cricket