A look back at one of the greatest solo performances in the history of the tournament: Kripal Singh scored 98 and 97 (out of 139), and took 4 for 18 for good measure.

March 9, 1955. The Ranji Trophy had eluded Madras (as the Tamil Nadu Ranji team was called) till 1954-55, but Balu Alaganan and his men were another proposition altogether. Up against Bengal at home in the semi-final, the Madras new-ball bowlers gave their side a crucial first-innings lead. It should have been an easy win for Madras, for the Bengal seamers lived up to the expectations. Then Kripal Singh played a spectacular innings to complement his first-innings performance, and sealed things off by taking crucial wickets. Abhishek Mukherjee looks back at one of the greatest solo performances in the history of the tournament.

For the uninitiated, some of Madras cricket’s most significant contributions came from a Sikh family: Amritsar Govindsingh Ram Singh, the patriarch, was the second person to achieve the 1,000 run-100 wicket double in Ranji Trophy. He should have been a part of the 1936 tour to England, but thanks to Vizzy and a ‘quota system’ (Cotah Ramaswami was the Madras player), he was left out.

Ram Singh came close to selection when Test cricket resumed in 1946. He later told Suresh Menon in an interview for Express Magazine: “Pataudi even asked me to keep my passport ready. But I was not destined to go. I was batting well in the selection match when I called for some water. The cold water brought on cramps and I was forced to retire. A prominent Indian cricketer spread the canard that I had a heart problem.” He never played a Test.

But this is the story of Kripal. It is also the story of Balu Alaganan, who transformed Madras into a magnificent side. They had reached the final in 1935-36 (under M Baliah) and 1940-41 (under CP Johnstone), but the title had remained elusive. The side had two emerging stars in CD Gopinath and Kripal the side, and had the perfect balance. In Ram Singh and KS Kannan they also had two excellent coaches.

Alaganan later told PN Sundaresan (as quoted in Ranji Trophy: Golden Years 1934-35 to 1983-84): “I was extremely lucky indeed to have as my colleagues a band of fine sportsmen whose aim was only to do well as a team. In this respect much credit is due to our two coaches, Ram Singh and KS Kannan. They spared no efforts in moulding us into a well-trained and well disciplined unit.”

Madras pushed aside Travancore-Cochin easily, thanks to an excellent all-round show from Kripal: he backed his 2 for 46 with a massive 208, adding 276 with Alaganan for the fifth wicket. Kripal top-scored against Hyderabad as well with 64 before MK Murugesh (4 for 64) and AK Sarangapani (4 for 80) gave Madras the all-important first-innings lead.

Two victories gave Madras entry to the quarter-final. Bengal duly went past Services (who were still a season away from becoming a formidable unit). Vijay Hazare (3 for 52, 105*) knocked out Bombay single-handedly. Mushtaq Ali’s Holkar, on the other hand, got a walkover from Rajputana and crushed Madhya Pradesh.

By the time the second semi-final got undergoing at Nehru Stadium, Madras, Holkar had taken control at Indore. Reduced to 19 for 3, they fought back through BB Nimbalkar (162), who was ably supported by five other men who went past 48. They eventually piled up 492.

At this stage Holkar should have pocketed the match, but No. 10 (Jyoti Vin) and No. 11 (wicketkeeper Madhav Limaye) added 89 for the last wicket. Baroda conceded the match after Holkar eventually obtained an 80-run lead.

While all this was happening in Indore, Madras witnessed an excellent partnership for the fourth wicket between Kripal and CD Gopinath after they were 59 for 3. One of the most attractive batsmen when on song, Gopinath had scored 41 (in a Test), 55*, and 130* in his previous three innings, all in Pakistan.

Madras finished Day One on 242 for 3, and the pair took the score to 274 before Kripal (98) and Gopinath (121) fell in quick succession. With the door slightly ajar, medium-pacers Sumit Shome (5 for 78) and ‘Putu’ Chowdhury (3 for 53) bowled Madras out for 347. MK Balakrishnan scored a hard-fought 40, but none of the last five men reached double-figures.

The Madras opening bowlers, J Ramakrishnan and Chandrahasa Alva, were up to the task. Bengal were reduced to 65 for 6 before recovering to 98 for 6 at stumps on Day Two. The difference in class between Pankaj Roy and the others showed: Bengal’s first great batsman remained unbeaten on 61 while nobody else went past 10. By this time Holkar had made their way to the final.

Madras were outright favourites when they took field on Day Three. Once Roy fell for 74 the seamers made steady inroads. Premangsu Chatterjee (last out for 36) stood firm, adding 51 for the last two wickets, but Ramakrishnan (5 for 66) and Alva (4 for 59) gave Madras a 173-run lead.

Alaganan did not enforce the follow-on. Punya Datta gave Chowdhury the new ball.

Chowdhury started the slide, removing wicketkeeper DL Chakravarti and M Suryanarayan with the new ball. The score read 2 for 2. Kripal walked out, and decided to take the bull by the horns.

Ramakrishnan scored a mere 9 in the fourth-wicket stand of 42. Gopinath fell cheaply, as did Balakrishnan and Alva. The score read 77 for 6; the lead, an attainable 250. The six dismissed batsmen had managed a mere 18 between them.

Kripal finally found support in SV Vaidyanathan. Chatterjee and Chowdhury, two of the finest new-ball bowlers of the era in helpful conditions, bowled their hearts out — but Vaidyanathan remained there. He did not get the runs, but he remained there.

Inch by inch they progressed, Kripal and Vaidyanathan — the former, with dazzling strokes round the park, the latter, with tremendous application against quality seam bowling. Datta tried his spinners, Anil Bhattacharjee and Kalyan Mitter, for short spells — but to no avail.

It took the innocuous bowling of Shanti Ghoshal to break through: Vaidyanathan had scored a mere 9, but the pair had been worth 49. Alaganan helped Kripal add another 13; Kripal eventually tried to chance his arms off Ghoshal and fell for 97, scored in three hours with 12 boundaries.

Madras were bowled out for 139 at stumps on Day Three, which meant that the others contributed a mere 42; twelve of these were extras. Chowdhury’s 6 for 35 was not enough.

But there was more…

It was as magnificent a performance as any, more so because Bengal’s margin of defeat (157) was significantly less than his 195 in the match.

– There was no stopping Kripal (and Madras) after that. Holkar could only blame themselves for their overconfidence. Gopinath later told S Dinakar of The Hindu: “The Holkar players were so sure of victory that they even had a group picture taken at lunch in anticipation of a win.”

Madras secured a 61-run lead. Kripal followed his 3 for 100 with 91, but once again they were down to 234 for 9 when Murugesh joined Alaganan. The captain later told Sundaresan: “Instead of being perturbed, he instructed me calmly not to throw my wicket away as he was quite confident of holding one end up. His were not empty words as subsequent events proved.”

The pair added 77, and Holkar were left to chase 373. They reached 212 for 3, but once again they ran into Kripal (4 for 113) and Murugesh (5 for 114) and lost by 47 runs, though not before Pratap Singh and Arjun Naidu scared them with an 81-run ninth-wicket partnership. Alaganan gave Madras her first Ranji Trophy.

– Later that year Kripal scored a hundred on Test debut, against New Zealand at Hyderabad.

– It was not until 1987-88 (under Santhanaraman Vasudevan) that Madras won another Ranji title. The Ranji team was called Tamil Nadu by then. They are still looking for their third title.

(Abhishek Mukherjee is the Chief Editor at CricketCountry and CricLife. He blogs here and can be followed on Twitter here) 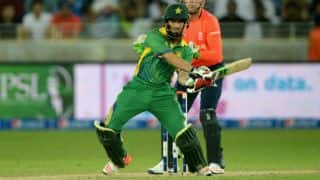