Karnataka are ahead in the game and it is now up to Maharashtra to do something special.

If Day Two of the Ranji Trophy 2013-14 final was dominated by Karnataka, Maharashtra salvaged some pride on Day Three as they picked seven wickets. Yet, Karnataka are way ahead in the game and it is now up to Maharashtra to do something special. Karnataka went about scoring runs quite smoothly for a major part of the day.

Here are some of the major talking points of Day Three:

Maharashtra picked up their first wicket after a long wait, that too in the very first over of Day Three. Ganesh Satish, the centurion of Day Two, had told CricketCountry that Chirag Khurana was getting a bit of turn. It was that turn that did him in when Khurana pitched it outside the off-stump and turned it into Ganesh. It hit the stumps and Maharashtra were a relieved lot. Although they had seen Robin Uthappa leave the field, he was fit enough to return again to bat.

Lokesh Rahul gets his ton

Rahul got his ton early in the day with a sweep through square-leg. It was a good effort, especially considering the fact that Rahul was unwell in the lead-up to the game. The innings was full of class, as he played some magnificent cover-drives. However, the shot that would stand out in memory came after his ton, as he charged to Akshay Darekar and merely lofted him over long-off for a six. During his innings, he completed 1,000 runs for the Ranji Trophy 2013-14.

Maharashtra finally hold on to a few catches

Maharashtra’s fielding has been a disappointment during the final, as they let go as many as six chances. Early on, Uthappa cut one through the slips and Kedar Jadhav did not get his hands around. But, Rahul was finally dismissed when he tried to cut Shrikant Mundhe and edged to Rohit Motwani. After lunch, Uthappa flayed at one outside the off-stump and offered a catch to point. The substitute fielder there took a good catch to his right. Some inspiration needed! Samad Fallah then got into his act and took one off his own bowling.

Samad Fallah turns it on

While Fallah searched for the swing on Day Two, he was very much on song on Day Three. Finding that movement after lunch, he first trapped Manish Pandey leg-before and then exulted as the batsman went past. CM Gautam lobbed a catch back to Fallah and he held it in his follow through. Late in the day, Amit Verma was dismissed as he was trapped leg-before by a ball that came into him. Replays did suggest that it may have hit him outside the off-stump.

Karun Nair was well set and was approaching his 50. Khurana had got a long spell and was trying to search for wickets. He over-pitched one and Nair was trying to go for the reverse sweep; almost premeditated. The ball went underneath his bat and was taken by Rohit Motwani. A persistent appeal saw the umpire raise his finger and Nair was very disappointed. Nevertheless, the wickets did add a bit of spice to the contest. 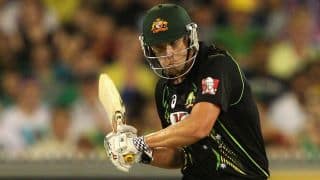