Dark Horses Assam sit pretty on top of Group A in the ongoing Ranji Trophy 2015-16.

Assam played their first Ranji Trophy in 1948-49. They have played 255 matches, winning a mere 41; 19 of these wins — which makes it nearly half — have come against Tripura. Six of their seven double-hundreds have come against Tripura, Orissa, and Bihar (the other was scored by former Tamil Nadu batsman R Sathish — against Tamil Nadu). Only four times have their bowlers got eight wickets in an innings, and three of them have been against Tripura. Of the major Ranji Trophy sides, they have beaten only Uttar Pradesh, Rajasthan, and Hyderabad. Surprisingly, two of them were by an innings. That was till Sunday.

Assam were never a powerhouse of cricket. No Assamese cricketer has played for India. Zakaria Zuffri and Abu Nechim Ahmed have found fleeting mentions, but that was it. They were seldom household names in India. In fact, it has always been the other way round: domestic giants without any chance of making it to the Test side have made Assam their home.

Assam cricket typically gets mentioned when they talk about Abu Nechim Ahmed’s hat-trick; that 475-run stand between Lalchand Rajput and Zahir Alam; Dheeraj Jadhav’s five hundreds in 2011-12; and most famously — a favourite of quizmasters — Samarjit Nath’s 11 dismissals in his only First-Class appearance. Once again, all that was till Sunday.

Assam started Ranji Trophy against the Indian domestic cricket behemoth they address by the name Karnataka. They played at home, but they were playing Vinay Kumar’s men. And yet, left-arm spinner Syed Mohammad cast his web on a batting line-up that boasted of Robin Uthappa, Mayank Agarwal, CM Gautam, Karun Nair, Shreyas Gopal, and Vinay Kumar — all fringe players at international level.

Syed Mohammad is one of the many, many Ranji Trophy spinners who start for major teams, eyeing a spot in the side before moving to a smaller state. His stint for Tamil Nadu was not outstanding. He did not even get his Ranji Trophy cap, but he earned an RCB contract. He even removed Sachin Tendulkar in the 3rd Preliminary Final of 2011, and Michael Hussey in the final.

His Assam performances have been spent in relative obscurity for no apparent reason. Two seasons back he bowled Assam to a historic win over Maharashtra with 3 for 92 and 7 for 50. Maharashtra were runners-up that season.

Desperate to gain full points, Karnataka batted at breakneck pace. Vinay Kumar set Assam 388, and took two wickets on Day Four to reduce them to 30 for 3. That sinking feeling crept back as Karnataka roared back into the match the way they have done several times over the past two seasons. But Arun Karthik (115 not out) battled it out, batting for close to six hours, saving the match. Assam finished the match on a high — to the extent that Vinay Kumar gave up hope in the end and resorted to using ten bowlers.

In case you are wondering who Karthik is, started with Tamil Nadu, and even tried his hands in Sri Lankan domestic cricket. His First-Class batting average reads a healthy 42.59. His T20 strike rate is 127. He also keeps wickets.

Ardent IPL fans may remember Karthik from his CSK and RCB days. He made news by when he hit Daniel Christian for six in the last ball of the match against South Australia Redbacks in Champions League T20 2011. His captain Virat Kohli later admitted that he had not expected Karthik to finish things off — for RCB needed 6 off 1 ball.

But it was a one-off, they said. Karnataka had one off day. The pitch got flatter as the match went on. Or so they said, for this was Assam. They would not have said if it had been one of the big guns.

Then came the Rajasthan match. Once again Assam played at home. Rajasthan did slightly worse than Karnataka: they were skittled out for 186. Their bowlers hit back, and at 138 for 4 any side could have prevailed. Even if Assam managed a slender lead, Rajasthan were always in the match. There was too much time.

But Karthik took control again. The Karnataka bowlers had been unable to remove him for almost six hours. It took the Rajasthan bowlers almost eight hours to get rid of him. He was ninth out, scoring 151, adding 80 for the fifth wicket, 90 for the seventh, and 67 for the ninth. Assam’s lead mounted to 236.

Krishna Das will turn 25 this Monday. He is a rank tail-ender, just like his new-ball partner Arup Das, barely a year younger to Krishna. None of them look menacing. Both bowl right-arm medium — the commonest form of bowling practised throughout the history of the sport — for ‘unfashionable’ Assam. In English cricket they would have been referred to as ‘trundlers’. Medium-pacers thrive with their swing in England, but are usually bashed into oblivion by Indian batsmen.

Krishna had taken 5 for 32 in Rajasthan’s first innings; Arup, 2 for 26. In the second innings they bowled all but three overs of the Rajasthan innings. Syed Mohammad was not needed. Krishna’s 5 for 23 took his match figures to 10 for 55. Arup finished with 7 for 65. Between them they bowled out Rajasthan for a paltry 84.

The perseverant Sanath Kumar’s efforts are finally coming good. As I write this, Assam sits at the top of Group A smugly with 10 points, two clear of Delhi. Odisha is next, but hang on — aren’t Odisha sitting on a paltry 2 points from 2 matches? 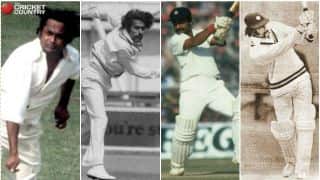 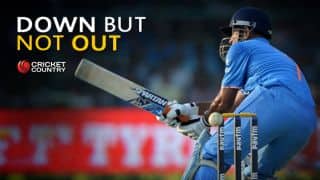 MS Dhoni: Finisher no more, but still a key batsman for India in ODIs