The 2012-13 Ranji Trophy final marks Mumbai’s 44th appearance in the title round. The team has triumphed a whopping 39 times. In this four part series, Arunabha Sengupta sketches the previous Mumbai wins in the history of the tournament. The 2012-13 Ranji Trophy final marks Mumbai’s 44th appearance in the title round. The team has triumphed a whopping 39 times. In this four part series, Arunabha Sengupta sketches the previous Mumbai wins in the history of the tournament.

The first-ever Ranji Trophy tournament. The trophy was donated by that supreme patron of cricket, Maharaja of Patiala. However, it bore the name of the great Prince KS Ranjitsinhji who had passed away the previous year.

After three-and-a-half months of group matches, Bombay and Northern India met in the final – a timeless match that started on March 4, 1935.

Bombay, as they would continue to be in the years to follow, was a strong side, with players of the stature of a young Vijay Merchant, captain LP Jai and wicketkeeper Datta Hindlekar.

Northern India was no pushover either, led by the Worcestershire professional George Abell and containing players of the calibre of Amir Elahi, Baqa Jilani and Devraj Puri.

Bombay batted first and was quickly reduced to 162 for seven by some spirited pace bowling of Puri, Saeed Ahmed and Mubarak Ali. A fighting fifty by Padmakar Chury enabled them reach 266 by the time they were bowled out in the early minutes of the second day.

Some solid batting by Ahmed Raza – who later sired two First-Class cricketers and was to become better known as the uncle of illustrious Pakistani cricketers Javed Burki and Imran Khan – and captain Abell took Northern India to 142 for three before they collapsed to 219 all out in front of some tidy bowling. Incidentally, the youthful Merchant opened the bowling and picked up three wickets for 53.

Batting for the second time, Bombay lost half their side for 70, struggling against a menacing Puri and an impressive Jilani. But, as a precursor of what would follow over the next couple of decades, Vijay Merchant stood at the wicket like a rock. He batted at number six, and found solid support in the magnificent and largely forgotten Parsee fast bowling all-rounder Hormasji Vajifdar. The two put on 135 runs for the sixth wicket.

Puri picked up six wickets, but Merchant’s 120 took Bombay to 300. And when Northern India batted again, they had no answer to Vajifdar’s fast-medium deliveries. Only Raza fought his way to an unbeaten 62, as rest of the batting collapsed to 139 all out. Vajifdar ended with eight for 40.

Bombay accomplished the first of their 39 Ranji Trophy triumphs.

Vajifdar was at the helm of Bombay squad this time while Madras was led by the 42-year-old M Baliah. Cottar Ramaswami and MJ Gopalan were the international stars of the Madras team. For Bombay, Rustomji Jamshedji’s left-arm spin added Test strength to the bowling alongside Merchant in batting and Hindlekar behind the stumps.

Ahmed Baporia scored a career-best 90 after Hindlekar and SM Kadri added 105 for the first wicket. Some flourishing late order hitting by Raghunath Wadkar took the total to 384. When Madras replied, the left handed medium pace of another Parsee bowler, Bomanji Kalapesi, restricted the challengers to 268.
In Bombay’s second innings, Vijay Merchant batted at No 3 and scored a well-paced 79. Vajifdar chipped in with a useful knock, but the left arm spin of AG Ram Singh kept them down to 199.

But on a wearing pitch, Kalapesi and Merchant removed the top order and then Jamshedji spun out the tail. Only Ramaswami resisted with 40. Madras was shot out for 125, giving Bombay their second tournament.

After an unusual barren run of five years, Bombay won one of the most one-sided finals. The Mysore side led by Safi Darasah had neither the talent nor the experience to stand up to Merchant’s Mumbaikars.

Jehangir Khot bowled out the Mysore team for a paltry 68, and by the end of the first day, Mermadi Mistry had set the tone with 93 and Bombay stood on 206 for two. The next day KC Ibrahim hammered a hundred, Merchant and wicketkeeper Madhav Mantri scored sixties, and Bombay amassed 506.

Khot picked up five more with his off-breaks in the second innings and Bombay triumphed by an innings.

A monumental clash of titans.

Merchant, Ibrahim and Mantri were by now joined by Rusi Modi, Dattu Phadkar and Keki Tarapore to make Bombay an even more formidable prospect. On the other side, Holkar was led by CK Nayudu, and in their ranks were brother CS, Mushtaq Ali, Chandu Sarwate, BB Nimbalkar and a gentleman serving the British Royal Army in India, answering to the name Denis Compton.

In the first innings, the captain of Bombay scored just four – but the score totalled against the name Merchant was 79 more. Brother Udaykant had stepped up with a sterling innings. Modi got 98, Rustom Cooper 52 and Yeshwant Palwankar, the son of the great Baloo, defied CS Nayudu’s leg-breaks to amass 75. Bombay ended at 462.

Sarwate’s 67 and a gallant hundred by Mushtaq Ali had taken Holkar to 192 for two when Phadkar did the star turn by trapping Compton leg before for 20. CK failed, but CS hit hard and often to a half century, but Holkar fell 102 short of Bombay’s score.

It was now that the match turned into a tale of mammoth scores. Modi and Vijay Merchant added 226 for the third wicket. Cooper and Merchant added 246 for the fourth. After the more accomplished brother had fallen for 278, the other Merchant scored 73. Bombay stopped after toting up a huge 764.

It was not over. With 867 to win, Holkar lost the openers for 12, but Mushtaq stroked his way to his second delightful hundred of the match. And Denis Compton, egged on by the promise of a reward of Rs. 100 for ever run after his century, batted on and on and on. It was towards the end of the sixth day of the timeless match that Khot bowled OP Rawal to end the Holkar innings at 492. Compton was stranded on 249 not out. The nobleman who had promised the reward had vanished, leaving a note that he had been called to Calcutta on urgent business.

Baroda did contain the combined power of captain Vijay Hazare, and Test players Hemu Adhikari, SW Sohoni, Jaysinhrao Ghorpade and Gul Mohammad. Besides, Vijay Merchant was unavailable for Bombay. However, the Bombay side had been replenished by the young guns Polly Umrigar and Gulabrai Ramchand.

It was skipper KC Ibrahim who sealed the fate, by winning the toss and then scoring a mammoth 219. Batting at number seven, Madhav Dalvi pitched in with a hundred as well. Bombay piled up 620. And then Dattu Phadkar ran through the opposition picking up six for 49, as Baroda could manage only 268, Hazare fighting alone to score 98.

This being a timeless match, Bombay decided to bat again. Sohoni bowled his heart out to capture five wickets, but 70 by Udaykant Merchant, and late order half centuries by Ramchand and Phadkar took the second innings total to 361.

Set 714 to win, Baroda did not make much of an attempt. Hazare scored 115, but more due to the curse of habit than with any tangible objective.

By now, Bombay was almost a full-strength Test side: Mantri, Modi, Phadkar, Ramchand, Vinoo Mankad and Sohoni. Alongside them flowed in the fresh blood Vijay Manjrekar, Madhav Apte, Sadu Shinde and Subhash Gupte.

Holkar was led by 55-year old CK Nayudu and had in their ranks the ageing Mushtaq Ali, alongside Chandu Sarwate and BB Nimbalkar.

There was some even trading of blows in the first couple of innings. Mantri and Apte got 90s as they added 177 for the first wicket. And then Ramchand and Mankad posted hundreds. Bombay ended with 596.

Sarwate and Nayudu scored valiant half centuries in response, and Holkar did not do too badly with 410 even as Phadkar picked up seven wickets. However, when Mantri got 152 in the second innings and declared on the morning of the fifth and final day at 442 for five, Holkar was batted out of the match and collapsed to 97 all out against the spin of Gupte and Mankad.

The sides met again in the final two years later. Mushtaq Ali led Holkar in the absence of CK Nayudu and Sohoni captained Bombay. Holkar won the toss on their home ground, but only Sarwate and Khanderao Ranganekar got decent scores, as Gupte and Mankad restricted them to 292. Rusi Modi batted with excellent composure for 141 and Mantri, playing as a batsman with Naren Tamhane doing the duties behind the stumps, compiled 91.

The lead was just 84, but Holkar collapsed to 193 all out in the second innings against the spin of Mankad and the medium pace of SV Shankar. Madhav Apte smoothly guided Bombay to a eight wicket win.

Bengal, led by Probir Sen, was a spirited, if limited, outfit. The might of Bombay proved too much for them in the final at Eden Gardens.

Manohar Hardikar settled the issue in the first innings by picking up eight for 39 in 39.1 virtually unplayable overs of off-break. In reply to 255, Bombay stood at 219 for two at one stage, with Polly Umrigar on his way to a hard hitting century. However, left arm medium pacer Premanshu Chatterjee triggered a collapse and the lead amounted to a meagre 53.

But Bengal could not retrieve the situation, with Gupte and Umrigar running through the second innings. In the end, victory came easily enough for Bombay.

This was the beginning of an amazing eighteen year sequence of Ranji Trophy wins.

Captain Hemu Adhikari, middle-order batsman Chandrasekhar Gadkari and medium-pacer Surendranath did bring some amount of Test flavour to the Services team, but it was not enough.

Only Gadkari and leg-spinning all-rounder GN Kunzru managed some resistance as the bowling skills of Umrigar proved too much for the Services. In response to a first innings total of 171, opener Yatin Rele, who played just four seasons in his career and ended with an average over 50, hammered 162. Umrigar and Kamalkar Panjri spun the servicemen out in the second innings to complete an innings win with one and a half days to spare. 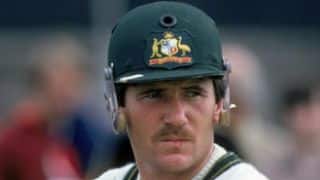