Ravi Shastri travelled to the past "like a tracer bullet."

On the occasion of India’s 67th Independence Day, The UnReal Times commissioned ace commentator, Ravi Shastri, to travel back in time using proprietary time-travel technology licensed from CNN-IBN to provide live commentary on India’s freedom struggle. Ravi agreed to provide commentary in his inimitable, cliché-ridden but highly objective style, for the time period commencing from Mahatma Gandhi’s debut on the national scene.

With that, over to Ravi from the all-party meet in Allahabad, 1920:

Ravi: Good evening, ladies and gentlemen. The atmosphere is electric, and the noise is deafening. We should be in for a cracker. I have with me the new skipper of the Indian team, Mohandas Karamchand Gandhi. (Turning over to Mahatma Gandhi) Hello MG, things have not been looking good for your side…the Rowlatt Act of 1919, then the disappointment of the Montagu-Chelmsford reforms, followed by the Jallianwala Bagh massacare. What changes have you planned for the remaining Tests?

Mahatma Gandhi (smiling at the cameras): Good evening Ravi, and good evening viewers from what..oh yes, 2014. Well of course, things have not panned out according to expectations so we are going to try out some new strategies. We’ve decided to go in for non-cooperation by boycotting British goods and institutions, resignation from government employment, and refusal to pay taxes until our demands for self-governance are met.

Ravi: Any changes to the squad?

Ravi: What’s the mood like in the dressing room?

Mahatma Gandhi: Oh, it’s very peaceful. Earlier there were some difference with the Muslim League but that’s been resolved and team spirit is very high.

Ravi: One final question, MG. Do you like Indian curry?

Mahatma Gandhi: No, it’s too spicy. Boiled vegetables and goat’s milk it is for me.

Ravi: Have a good one, Mohan

Mahatma Gandhi: Thanks and you too, Ravi

(With that, Mahatma Gandhi briskly walks away to the Congress headquarters)

Ravi: Ladies and gentlemen, the news from the Center is that the Congress has decided to bat first and they have decided to go in for a mass non-cooperation movement.

The non-cooperation movement got underway with unparalleled magnitude, enjoying widespread popular support. Mahatma Gandhi had led a similar mass movement in South Africa, a fact that did not escape Shastri’s keen mind.

The youth responded to Gandhi’s clarion call and rallied to the cause. Mahatma Gandhi called for protesters to refuse to buy British goods, picket liquor shops and adopt the Indian handicrafts. Ahimsa was his central theme.

The British began to quiver, as the movement gathered momentum.

And then suddenly, Chauri Chaura happened. Violent clashes between protesters and the police resulted in the death of 22 policemen. A disillusioned Gandhi felt that the movement was going off course and called it off.

Around this time, a 16 year old Pathan from the Khyber pass made his sensational debut in politics by joining the Indian National Congress.

Frontier Times: Boom! Fastest ever speech by 16 year old Afridi. But the very next day, Afridi changed his mind and quit the Congress to join the Muslim League.

Afridi: Congress politics not suited to my temperament. Will focus on my career with Muslim League instead.

However, his flirtation with the Muslim League was also all too brief and Afridi retired from all forms of the game to focus instead on the game of the empire.

Afridi: Politics is just not cricket. Hanging up my boots.

Afridi wouldn’t be heard of again until 1996.

With Mahatma Gandhi calling off the movement, there was an extended period of lull in the 1920s. It was a very tense but quiet period of play.

And then, John Saunders was shot by two firebrand revolutionaries, Bhagat Singh and Rajguru.

One thing led to another, and Mahatma Gandhi commenced on the Dandi march. Striding along with the Mahatma, Ravi Shastri tweeted:

The civil disobedience movement reached its acme with the Dandi march and culminated in the round table conference, which Gandhi attended as INC’s sole representative. The Government of India Act, 1935 was hammered out and elections for the provincial assemblies were held in 1937, which the Indian National Congress swept.

The business end was fast approaching with WWII breaking out. Bose quit over differences with Gandhi and went on to essay the most glorious chapter of the Indian innings. Shastri however stuck to the main narrative, and in 1942, Gandhi launched the Quit India movement with the powerful slogan “Do or die”, and demanded freedom of India after the war.

The British did not agree. Acting quickly, they arrested over 100,000 people including all the leaders of the Congress party. Gandhi’s wife died during detention, as did his secretary. His own health deteriorated.

The Second World War left the British economically and militarily weakened. Conscious of the mood of the Indians as well as the British public back home, they began discussions with leaders of the Congress party. Clouds of partition were now looming over the subcontinent.

And then partition was announced. The Labour government commissioned Sir Radcliffe to draw up the boundaries based on the 1931 census.

And with that, the British left. Just like that.

And India was born, amid carnage and unprecedented savagery as the flames of the communal holocaust ravaged the subcontinent. “Ladies and gentlemen, It has been a fabulous 27 years. Three mass movements of civil disobedience staged in fits and starts, over a million people lathi-charged, thousands of leaders arrested, released and re-arrested, and it’s only fair to say that in the end…What’s that? I hear sounds of ‘hai, hai’…must be a communal skirmish…”

Shastri turns around to find a mob rushing towards him with batons, sticks and other assorted weapons, screaming ‘Shastri hai, hai.’ “Uh-oh, this is just not what the doctor ordered,” mutters Shastri, before pressing a button on his wrist watch to teleport himself back to the present. 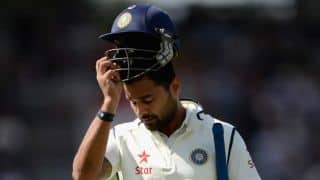 India lose Murali Vijay, India struggling at 36 for five on Day 1 against England at The Oval 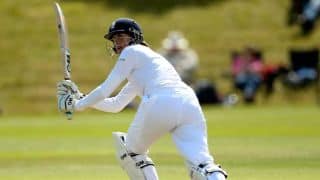