Perhaps the main difference is that the fear of being hit out is no longer a deterrent for Ashwin to give the ball air and bowl slowly.

Ravichandran Ashwin snared 6 for 46 on Day One of the first Test between India and Sri Lanka at Galle. He took 3 for 15 in the first session and followed it up with 3 for 31 in the second session as well. One of the features of his spell was his willingness to give the ball air and extract gratuitous turn. Ashwin has been bowling wonderfully for some time now, and seems to have rediscovered his magic. Shiamak Unwalla feels this renaissance of Ashwin is the best that he has ever bowled. READ: Ravichandran Ashwin takes 6 for 46 as India bowl out Sri Lanka for 183 at tea on Day 1 of 1st Test at Galle

One of the major complaints experts had against Ashwin was that he was too impatient to succeed in the longest format. He tended to push the ball through and focus on variations rather than good old-fashioned flight and conventional turn. As a result he would find immense success in India, but was ineffective overseas. He was dropped from the playing XI in Tests during India’s tour of South Africa in 2013-14 and replaced by the steadier Ravindra Jadeja. READ: India vs Sri Lanka 2015: Learning experience for both sides

Ashwin played again during India’s tour of England in 2014, taking 3 for 72 at The Oval. He was not at his best, but there were signs of improvement. He was retained for the Australia tour, where he took 2 for 128 at The Gabba, 3 for 134 and 2 for 75 at MCG, and 1 for 142 and 4 for 105 at SCG. These numbers do not look particularly impressive, but the difference in Ashwin’s bowling was slowly becoming evident. He looked more patient, bowled with a calmer disposition, and went back to bowling slowly in the air and giving the ball flight. Steven Smith batted beautifully against him, but few others mastered him. READ: Rohit Sharma’s catch during Day 1, India vs Sri Lanka 2015 1st Test: Why it is one of the very best

After that Test series came ICC Cricket World Cup 2015, and Ashwin’s true improvement was now unequivocally visible. Barring Imran Tahir, Ashwin was probably the best spinner of the tournament: though he did not take a lot of wickets he was almost impossible to score freely off, and was almost never dominated. He had rediscovered himself after a brief period in the wilderness and came back a better bowler. READ: India vs Sri Lanka 2015: Kumar Sangakkara’s chances of fairytale ending seem bleak

Having done the hard work in unhelpful conditions, he is set to enjoy an extended run in familiar subcontinent conditions. The results are already visible; Ashwin became the first Indian bowler since Harbhajan Singh in 2006 to take consecutive five-wicket hauls overseas. He took 5 for 87 against Bangladesh and followed it up with 6 for 48 against Sri Lanka. He also registered the best figures by an Indian in Sri Lanka, and the best figures by an Indian in the first innings of an overseas Test. The major difference is that Ashwin is no longer taking wickets by darting the ball in and extracting spin purely because of the pitch; instead, he is giving the ball air and coaxing it to turn. READ: Milestones and records to aim for Kumar Sangakkara in his last series before retirement

Perhaps the main difference is that the fear of being hit out is no longer a deterrent for Ashwin to give the ball air and bowl slowly. With this new attitude, Ashwin’s renaissance is nearing completion. We can expect the over-enthused hunt for wickets to be replaced with a cerebral one; and that is good news for Team India. READ: India vs Sri Lanka in Test cricket: 12 magic moments 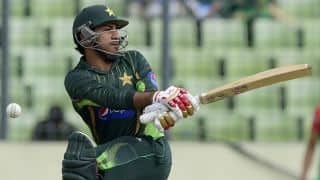 Sarfraz Ahmed may lead Pakistan A against England Lions