India's leading spinner has been fighting lone battles for a long time now.

Ravichandran Ashwin has been bowling wonderfully in recent times, and frequently comes on every time India need a breakthrough. He often performs, but he has to carry the burden of the other underperforming spinners. Shiamak Unwalla feels that it is time Ashwin gets better spin partners.

Ravichandran Ashwin is much like Anil Kumble; tall, intelligent, hardly a big turner, and often the key bowler in the side. The major difference between them is that Kumble often had support in the form of Harbhajan Singh, while Ashwin must rely on the increasingly inconsistent Ravindra Jadeja and the yet unproven Akshar Patel.

Jadeja is certainly not the bowler he was a couple of years ago. Since 2011, Ashwin and Jadeja have been India’s leading wicket-takers, with Jadeja actually enjoying a better average and strike rate than Ashwin. READ: I am bowling at my best, says Ravichandran Ashwin

Below is the list of most successful spinners with at least 10 wickets for India since 2011:

Ashwin and Jadeja have been outstanding in the last five years, streets ahead of the others, though Amit Mishra has done wonderfully in the limited opportunities he has got. Of the others, Akshar has done quite well, though he remains inconsistent overall.

If one looks at the more recent stats, a different tale is told. Below is the list of most successful spinners with at least 1 wicket for India since 2014:

Here is where the problem lies. Ashwin has excellent numbers, but Jadeja’s take a distinct plummeting. His average, economy rate, and strike rate are bloated, and he has looked a far cry from his usual accurate self.

Mishra and Akshar have enviable numbers, though Mishra played mainly against weaker players of spin. Akshar meanwhile has been impressive but rarely looks penetrative, and can be taken apart by quality batsmen. READ: Ravichandran Ashwin’s five-wicket haul helps India enforce follow-on against Bangladesh in one-off Test

Let us look at some of the prospective options to partner Ashwin. Of the players already mentioned, Mishra, Akshar, and Harbhajan Singh stand the best chance. Mishra is one of those players who has been dealt with shabbily by the selectors, and if given an extended run could do well for India. He is a genuine wicket-taker, and will offer a wrist-spinning variety to an otherwise finger-spinning attack.

Akshar, as mentioned above, has good numbers. He was selected for ICC Cricket World Cup 2015, but did not get to play. His batting is an added bonus, though he is yet to play a substantial innings in international cricket.

Harbhajan, meanwhile, was completely out of reckoning till he got a surprise call-up to the Test squad for the one-off match against Bangladesh. He bowled well in Bangladesh’s first innings, and if he is lucky he could find favour with the selectors. READ: Our bowlers have been pretty good, says Ashwin

There is also some untapped talent waiting on the fringes of the Indian team. Pawan Negi could be a like-for-like replacement for Jadeja, at least in T20Is. Kuldeep Yadav, the left-arm Chinaman, has all the variations needed to succeed at the highest level, and was briefly in the mix in

India’s limited-overs squads in late 2014. He could be brought into the side and groomed by the likes of Ashwin. Then there is Shreyas Gopal, the Karnataka leg-spinner, who is also a more than capable batter. Deepak Hooda and Shahbaz Nadeem could also be considered.

As things stand, unless Jadeja can find some form fast, India will need to help ease the pressure off Ashwin by introducing a new spinning partner for him. The only question is whether to go with someone tried and tested, or look for raw, untamed talent. 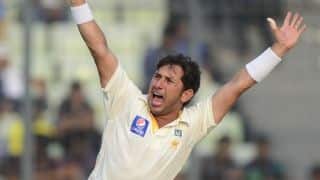