On November 26, 2011, the third Test between India and West Indies at Mumbai made its way into an elite list, for it was only the second time a match had been drawn with the scores level. Karthik Parimal takes a trip down memory lane. 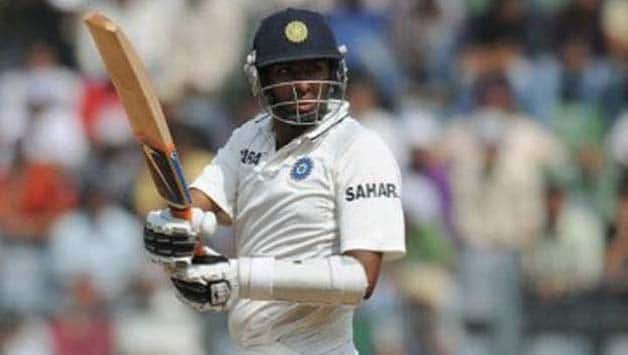 Before getting run-out on the last ball of the day, Ravichandran Ashwin was a hero in the Mumbai Test scoring a century and picking a five-wicket haul to set-up an exciting finish. It was only the second Test in history to end in a draw with the scores tied © AFP

On November 26, 2011, the third Test between India and West Indies at Mumbai made its way into an elite list, for it was only the second time a match had been drawn with the scores level. Karthik Parimal takes a trip down memory lane.


The way the series transpired, this third Test between India and West Indies in the winter of 2011 was least favoured to barge into the record books; certainly not owing to on-field reasons, one felt. After the battering they received at the hands of England a few months prior to the commencement of the aforesaid series, India’s prowess on familiar territory shone through, albeit against relatively weaker opponents. The West Indies, as was their pattern against formidable teams away from home soil, arrived physically, but perhaps mentally adrift. They were knocked over in Delhi and pummelled in Kolkata before the final fixture at Mumbai began.

West Indian skipper Darren Sammy won the toss and sensibly chose to bat, for, like most other captains touring the sub-continent, he knew what would be meted out on the fourth innings or on the final day; whichever came first. The decision paid rich dividends, as Adrian Barath and Kraigg Brathwaite, the opening pair, made light work of India’s new-ball bowlers in the form of Ishant Sharma and Varun Aaron. Spinners Ravichandran Ashwin and Pragyan Ojha were deftly dealt with, too. At lunch, the two batsmen trudged back to the pavilion unbeaten, 80 runs on the board, and were deserving of backslaps from pleased team-mates in the dressing-room.

During the second session, Barath and Brathwaite departed after notching half-centuries, and this brought Kirk Edwards and Darren Bravo to the crease. It was known to cricketing purists and viewers alike that the latter had moulded his batting demeanour on the refulgent Brian Lara, and this led to frequent comparisons with the left-handed maestro. Bravo seldom looked like he was cut from the same piece of cloth as his idol, but a spate of good scores recently not only pushed to fore similarities in their style of play, it also underlined Bravo’s appetite for big scores. Just one month prior to this Test, he smacked 195 against Bangladesh at Dhaka and propped his reputation by bagging 136 against India in the Kolkata Test a few weeks later.

Both Edwards and Bravo saw off the Indian bowlers in the final session of day one, perhaps thankful that the turf remained amiable and hardly turned sordid, which was against expectations. They, too, got to their respective half-centuries. Most distraught of the Indian players was Rahul Dravid, for he dropped a straightforward opportunity offered by Bravo, who was on 33 at the time, in the slip cordon off Ojha. The batsman then rubbed salt into the wounds by getting to his fifty  by picking a boundary off an edge that travelled between the slips and the gully.

Bravo looked in far better control the next morning, scoring freely against Aaron’s searing pace and nonchalantly knocking both Ashwin and Ojha, their guile notwithstanding. Despite Edwards’ fall, Bravo kept stitching good partnerships with batsmen who followed, and more than made up for Shivnarine Chanderpaul’s absence in that Test. He galloped to a ton with a cracking cover-drive off Ashwin and celebrated by planting a gentle kiss on his willow. He slackened thereafter, but his strike-rate refrained from drastically dipping. The next 66 runs after his century comprised of just three boundaries before Aaron plotted his demise. His 166 was inclusive of 17 fours, during the course of which he was involved in a 164-run third-wicket stand with Edwards and a 160-run fourth-wicket stand with Kieran Powell.

Marlon Samuels thwacked a brisk 61 and West Indies looked set to forge a gargantuan score, but the middle- and lower-order surrendered timidly to Ashwin’s precocious turners. Six wickets fell for the last 72 runs and the final total read an intimidating 590, although there’s no denying the fact that it could have been much scarier. Ashwin, though, finished with five scalps.


A wave of emotions

West Indies were nine wickets down at stumps on day-two, and this ensured a heavy turnout the following morning. The Wankhede Stadium, unlike the first two days, was far from deserted. This morning brought with it a level of anticipation reserved only for one man. India’s batting often attracts eyeballs, but this time the spectators filtered in to watch that man notch the elusive hundredth hundred. Gautam Gambhir and Virender Sehwag, the Indian openers, strolled to a 67-run partnership before Sammy broke through the latter’s defences. The fall of wicket was greeted by a loud cheer.

Gambhir and Dravid then pushed and drove their way to another fine stand, but in came Ravi Rampaul to have Gambhir caught behind the wicket. A raucous applause and deafening cheer ensued, certainly a little for Rampaul, but primarily for Sachin Tendulkar, who walked down the aisle for what many thought would be the last time. He unfurled shots, some trademark, which sent the packed sects of the stadium into a state of frenzy. Dravid was castled for 82, but the house remained unfazed. VVS Laxman followed suit, too, but the state of the match was now almost secondary. Tendulkar sailed past fifty and surged his way towards the burdensome milestone.

Around the same time, Rampaul’s bowling hit higher notes. He was swinging the ball both in and away from the batsman and at one point caught Sachin off-guard. The local favourite survived, albeit not for long. A few moments later, on 94, a short, away-going delivery from Rampaul, took the thick edge of Sachin’s wizardly willow and flew straight into the hands of Sammy in the second slip. The crowd were flabbergasted; their mouths forcefully sealed. Sachin’s wait, their wait, was destined to go on. What was until then a carnival atmosphere suddenly turned into one of gloom.

Mahendra Singh Dhoni was back in the hut soon thereafter and, at 331 for six, the match shot back into prominence.  Virat Kohli was the only recognised batsman, but in came Ashwin and, for perhaps the first time, donned the role of an all-rounder. He carved the West Indian bowlers through what were proper cricketing shots and blazed his way to a century at a strike-rate that always hovered over 85. He fell for 103 after steering his side to the shores of safety; or so one thought. A total of 482 was indeed well behind that of West Indies’, but with just four sessions of play left, the game doubtlessly headed towards a turgid draw.

Dhoni had yearned for a turning wicket from the outset and made his displeasure known after the end of the Test since his spinners could extract minimal assistance on the first four days, but what transpired on the fifth would have pleased him no end. Often expected to disintegrate in their second innings, the West Indians did just that, although quite briskly this time around. Opening the bowling, Ojha bagged six scalps and Ashwin finished with four as their batting line-up, suddenly very frail, could muster just 134. India now needed just 243 runs to win, and the target looked extremely gettable for they had a little over two full sessions of play still left.

Although Gambhir quickly made an exit, Sehwag’s blitzkrieg put India on course. However, he was caught off Sammy by spinner Devendra Bishoo and an unanticipated skid ensued. Sachin and Dravid were dismissed in the span of seven runs and India were at 113 for four, there was a dire need for recuperation. Laxman and Dhoni took upon themselves the task and the sailing had been smooth until Rampaul returned to send them off. The difference between deliveries left and runs required kept reducing with each passing over, but once Kohli fell for 63, with India still 19 behind and three wickets in hand, panic set in.

Nonetheless, Ashwin, who’d impressed many with his willow wielding abilities in the first innings, was still in the middle and looked composed enough to get his side over the line. However, what occurred in the penultimate and last over was utter commotion. Rampaul grabbed his sixth wicket of the match by knocking over Ishant Sharma’s stumps, and was also successful in getting Aaron to take the bait by giving him the single in the last ball of his over. This meant Ashwin would be off strike for the last six balls, off which India needed three runs to win.

Below is how the last over, bowled by Fidel Edwards, panned out.

First ball: Short delivery outside off and Aaron is clearly beaten for pace. The wicketkeeper safely pouches it as India now need three runs to win off five legitimate balls. Ashwin walks up to Aaron with a piece of advice.

Second ball: Another fast delivery but on a good length this time, and Aaron firmly drives it down the ground. No tick on the scoreboard, nevertheless. Three runs required off four balls. At this juncture, Ashwin’s perhaps ruing the fact that he let Aaron take that single off the last ball in the previous (Rampaul) over.

Third ball: Another scorcher from Fidel and Aaron decides to smash this out of the ground. However, a considerable distance between bat and the ball sees wicketkeeper Carlton Baugh deftly take it to prevent a quick bye. Three runs required off three balls.

Fourth ball: Easily the fastest ball of the over, bowled on length, but Aaron connects and, thanks to a misfield by Samuels at mid-off, scampers through for a risky single. India now need two off two balls. Importantly, Ashwin, the relatively better batsman, is on strike.

Fifth ball:  A melodramatic appeal for leg before wicket (lbw), but Ashwin gets an inside-edge onto his pads. No runs conceded, though. India need two to win off one legal delivery. Since only eight wickets have fallen, it’s certain India cannot lose the game. Ashwin scans the field for a scoring opportunity.

Sixth ball: Over 140 kph and Ashwin hits it to the fielder at long-on. His running between the wickets on the slower side, he fails to turn around in time for the second run. Recognising the fact that Ashwin was always going to be short of his crease, Denesh Ramdin, the substitute fielder, hurls the ball towards the ‘keeper and effects a comfortable run out.

India reached 242 for nine, and although the scores were level, it had to be declared a draw. It was only the second time a Test had been drawn with scores the same. The first of such games was played between England and Zimbabwe in the December of 1996, where the English were one short of the target with four wickets to spare. That, however, didn’t prevent David Lloyd, England’s coach at the time, from infamously uttering “We flippin’ murdered them.” [sic].

Ashwin, deservedly, was adjudged the Man-of-the-Match and Man-of-the-Series, but his disappointment was evident from his tweet which read: “Can anyone tell what differently cud have been done?? instead of saying cud have run the 2…moment I completed 1 the throw was over my head.” [sic]

When will Ishant Sharma face his Rohit Sharma moment?