Ashwin's record in the overseason conditions, minus the current West Indies series and Indian subcontinent, stands at: 24 wickets from 9 matches

Ravichandran Ashwin seems to be going through the form of his life at the moment, at least in the Test format. In the ongoing series between India and West Indies at the Caribbean, he has been top notch. India are leading the series 1-0, and are in a comfortable position in the second Test. Ashwin has well and truly played his part in the success, scalping 12 wickets already, including two fifers. By the time you would have read this, he might have dismissed few more batsmen. His unprecedented success has taken him to the summit of ICC’s bowler’s rankings. His performance against South Africa in 2015 was also exceptional, as he took 31 wickets in 4 matches. Many have labelled him as ‘spinning great’ after his recent displays. Yet, at least, according to me, he is well and truly far away from such a major tag! FULL CRICKET SCORECARD: India vs West Indies 2016, 2nd Test at Kingston

Ashwin is no doubt a brilliant spinner when there is turn in the pitch. His ability to turn the ball sharply is his major weapon. Standing at 6ft 2in, his height helps him get bounce from the track. Apart from that, he has mastered the ‘carrom ball’ and ‘arm ball’, which has turned him into a potent weapon. In the Indian subcontinent conditions, he is more than just a handful.

But what happens where there is nil or limited assistance for spinners. Is Ashwin equally effective? Well, most certainly not!

Yes, he is currently abroad, and doing exceptionally well. But against whom? WEST INDIES! Yes, the same side which has just won ONCE in the last 13 Test matches.

When his Test career started in 2011, he was part of the Indian team which toured Australia and lost 4-0. The off-spinner didn’t have a particularly great time personally, grabbing a mere 9 wickets in 3 matches. He was young, and just getting started, so his displays saw no reason to be scrutinised.

Then came the tour to South Africa in 2013, where India played two Tests. Ashwin was given his opportunity in the first one, and without doubt, failed to take. He bowled a total of 42 overs in the match, and went wicketless.

Ashwin’s real mettle was tested when India traveled to Australia and England in 2014. He was an experienced player by now, and had three years of international experience under his belt. Much was expected of him, but it is safe to say, he didn’t live up to the expectation.

In England, he managed just three wickets in the two Tests he played. He was the lead spinner in the side, but saw Ravindra Jadeja being chosen over him.

And Down Under, he took 12 wickets in three matches, at an average of 48.66. The total tally of wickets he took may sound fine, but strike rate and average were well below what was expected of him.

His record in the overseas conditions, minus the current West Indies series and Indian subcontinent stands at: 24 wickets from 9 matches, with a best of 4 for 105.

All the previous spinning greats had more than decent records overseas. Be it Anil Kumble, Harbhajan Singh, Shane Warne, Muttiah Muralitharan, all of them were able to make an impact in the foreign conditions.

It does not mean Ashwin cannot achieve this. He is nearing 30, and has a good 4-5 years of Test action in him. His improvement in the Test format in the past year or so has been exemplary, but he is still far far away from being recognised as a true ‘spinning great’. 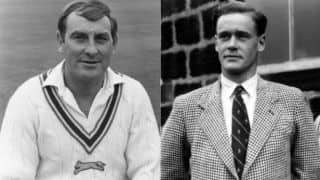