Ravindra Jadeja — the ‘rockstar’ as Shane Warne refers to has come a long way from being the butt of all jokes to being one of India’s most successful left-arm spinners.

Ravindra Jadeja — the ‘rockstar’ as Shane Warne refers to has come a long way from being the butt of all jokes to being one of India’s most successful left-arm spinners. Abhijit Banare looks at the all-rounder who has turned out to be a backbone of India’s One-Day International team.

Ravindra Jadeja‘s story is a classic example of a battle between perceptions and reality. From being one of the most ridiculed cricketers on social media, his career so far has been nothing short of an inspirational journey. If we turn back the pages, August 2013 could easily be marked as the time when perceptions changed about him. The jokes subsided and the country looked forward to the all-rounder, as a symbol of hope when the team was in dire-straits. Actually, it was post the Champions Trophy victory in England, Jadeja reached the top of the International Cricket Council’s One-Day International (ODI) bowling rankings and has since affirmed his spot as a reliable all-rounder.

His journey towards fame can be described in two contrasting ways. It’s up to the reader in what way he perceives it to be. Son of a watchman and losing his mother at an early age, he slogged it out for Saurashtra, was part of India Under-19 team which won the World Cup in 2008 and finally earned his place in international cricket at the back of a credible outing in Indian Premier League  (IPL). So, he went onto become the latest cricketer to be added to the long list of small-town cricketers making it big at the national level. There is also another way of describing him from the point of view of skeptics.  The one who was perceived to be overrated, banned for a year for negotiating with IPL teams and bought by Chennai Super Kings at a mind-boggling price of $2 million without a fifty or five-wicket haul to his name.

He has been a match-winner in recent times, but the negative perception built around him dates back to more than one example of him being the perceived cause of matches that led to India’s loss. The slow pace of scoring which led to a three-run loss in ICC World T20 2009 against England and the famous loss against Australia at Hyderabad where Sachin Tendulkar’s 175 went in vain (Jadeja departed with a needless run-out) are some examples of it. In the process of being jokingly knighted and at the receiving end of countless other jokes, Jadeja’s rise can be credited to the immense backing he received from MS Dhoni who saw him from close-quarters even during the IPL. Many questioned his inclusion in the final Test against England at Nagpur and later in the series against Australia. However, with 24 wickets in four Tests against Australia, he proved his mettle and it was just the start of a dream run for him in 2013. Away from the field the jokes got a bit over the line leading to his angry retaliation over abusive tweets.

In the Champions Trophy this year, he sizzled with his all-round performance and earned the golden ball award for his 12 wickets which included a Man-Of- he-Match performance in the final against England. Having completed 50 wickets in ODIs this year and 100 overall in this format, Jadeja has undoubtedly turned the tables to become a match-winner and Dhoni’s go-to bowler.

What makes him special?

When you see him bowl, there’s not much you could be worried about. He is not a phenomenal turner of the ball and he doesn’t have a mystery delivery that can keep the batsmen guessing and searching for answers. But Jadeja’s bowling is one that defines the demands of modern era, where drying up the runs takes precedence over wickets, at least in the limited overs matches. For long,  batsmen continued to underestimate his accuracy,  losing their wickets to him and walking back to the pavilion wondering what was so special about his bowling? Dhoni has constantly referred to the all-rounder as the one who keeps it straight and simple. Accuracy, change of pace and reading the batsman are among the basic equipments used by him  to dismantle the defence of quality batsmen. Michael Clarke in the Test series in March (where Clarke was dismissed five times), Mahela Jayawardene in the Champions Trophy semi-final, have all perished to him and have failed to read his line. The arm-ball that angles into a right-handed batsman and beats them with well-disguised pace is a treat to watch.

What next for Jadeja?

In India, once you have battled the perceptions successfully, there lies a tougher challenge of living up to the expectations. Every good performance brings Jadeja closer to facing new challenges. He has bowled well at home and on pitches where the surface has gripped and offered a bit of turn. But in conditions like South Africa and New Zealand, he will have to regain his workhorse attitude to consistently dart the ball in and fight his way out of trouble.

Jadeja has three triple centuries to his name — a record in itself. But none of it would matter if the consistency isn’t visible with the bat in international cricket. It’s a tireless job to be an all-rounder. Ask Yuvraj Singh on how a successful all-rounder can become the least preferred option in a matter of months. Jadeja too has to justify his value in the team across formats as time progresses, especially in Tests.  His presence allows Dhoni to shuffle with the bowling in the playing XI, at the same time, the tag of being unreliable as a batsman can hinder his progress even if the ball continues to do the talking.

Being part of the a young rising set-up which is known for its fearlessness and ability to conquer any challenges, Ravindra Jadeja will be a key player in India’s future campaigns and the one to watch out for in the ICC World Cup 2015. 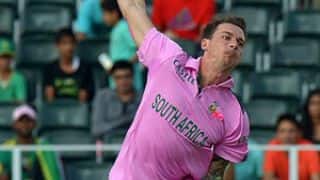 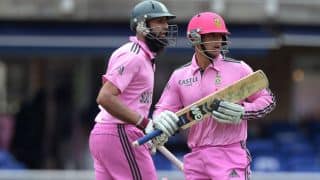