Both the all-rounders can be match-winners on their day.

Over the years, all-rounders, Ravindra Jadeja and Shahid Afridi have been mocked and jeered for various reasons. With Jadeja, it was perceived that he wasn’t good enough to play at the top echelons of the game. On the other end of the spectrum, Afridi has been ridiculed for his maverick ways and him ‘not ageing beyond 18’. However, both have that supreme ability to turn the tables and change the course of the game within no time and have that perseverance to wade through hurdles. As India take on Pakistan in Asia Cup 2014 in a titanic battle, the contest between Jadeja and Afridi will add to it as an intriguing sub plot.

If we go down a trip down the memory lane, Afridi’s career has been riddled with controversies and fabled magical moments. It can relate to him announcing retirements, his age, ball-biting incident, pitch tampering to sparkling knocks and bowling performances. His career feels like a James Bond movie with full of twists and sub twists.  But ever since he shone like a beacon with his hard-hitting batting and quickish top-spinners in 1996-97, here is a cricketer who has thrived in the abridged versions of the game.

While facing up to their arch-rivals India in Asia Cup, Pakistan think-tank would hope for Afridi to play his volley of breathtaking strokes and gave a few headaches to the batsmen with his top-spinners and other variations up his sleeve. Incidentally, Afridi’s record against India, especially as a bowler isn’t anything  to write home about. It isn’t a hidden secret that India play spinners extremely well. With the willow in hand, he has occasionally acted as a gale force to make every Indian bowler wince with pain and agony. Who can forget him smashing Indian attack to shreds in Sahara Cup in 1998. Today is perhaps the day when he will soar to celestial heights and become the ruling king of the proceedings.

When Jadeja was taken to the cleaners by Shane Watson in ICC World T20 in 2010, he became the butt of all jokes. Those snide jokes continued to haunt him for some time to come. Even Jadeja essaying triple-hundreds in First-Class cricket resulted in cricket pundits cracking jokes about his lack of ability. A prefix sarcastically was added to his name and he came to be called as “Sir” Jadeja.

However, ever since that series against Australia last year, Jadeja has made his critics swallow a bitter-pill. He has constantly come to MS Dhoni’s rescue when India have been in dire need of wickets and from time-to-time chipped in with runs too. The last time India played Pakistan in ICC Champions Trophy at Edgbaston, Jadeja kept their batsmen on a tight leash. Jadeja unmistakably has a repeatable action and turns the odd ball to keep the batsmen in check.

Even with the bat in hand, he has many times sent the ball whistling past boundary riders to take India to a commanding position. India won the Champions Trophy in England on the back of Jadeja’s vital contribution right at the end of the innings. In the recently concluded ODI series, he was in his elements in the game at Auckland. He made New Zealand bowlers look utterly pedestrian with his audacious power-hitting and helped India to tie the game. He followed that up with another eye-catching knock at Hamilton though, that was in a losing cause.

Both Jadeja and Afridi have had to engineer many comebacks by erasing those fine lines of criticism and poor form. But they have shown that single-minded focus to triumph over adversity and come out as true winners in the demanding world of international cricket. In today’s game, they will look to stamp their authority! 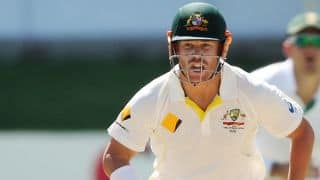