Ray Lindwall was sheer poetry in motion as he ran in to bowl. One of the greatest fast bowlers, Lindwall claimed 228 wickets for Australia at 23.03.

Ray Lindwall, born October 3, 1921, was sheer poetry in motion as he ran in to bowl, yet was one of the most dreaded fast bowlers ever to play cricket. With Keith Miller he formed one of the most terrifying combinations with the new ball. He was also more than a handy batsman who could give the ball a severe hiding. Arunabha Sengupta lists relatively little- known facts about the stalwart.

1. 42% of the 228 Test wickets Ray Lindwall captured in Test cricket were bowled. A further 14% were leg-before. Quite an achievement for someone criticised often for bowling too many bumpers.

2. While he grew up, Lindwall stayed in the same street in the suburb of Hurstville, Sydney, as Bill O Reilly. His friends and he would pitch their wicket in areas where the great man would be sure to watch them as he walked home. Later O Reilly took him under his wings at St George s Club and monitored his development with the recent developments in the art of photography.

3. The first international matches Lindwall saw as a kid was during the infamous Bodyline series of 1932-33. No wonder he was influenced to a great degree by the hostile pace as well as the beautiful bowling action of Harold Larwood.

4. Drafted in the Second World War and sent to the South Pacific, Lindwall suffered horribly from tropical diseases. During his better days in the army, Lindwall spent his time marking out his run-up between palm trees.

5. A phenomenal all-round sportsman, Lindwall could easily have been a rugby league international. He also ran the 100 yards in 10.6 seconds.

6. The rule of the back-foot no ball, along with the pronounced back foot drag of Lindwall, allowed him to take a yard off the distance between him and the batsman.

7. Lindwall began his Test career while working at Sydney s Commercial Steel and Forge. However, when his boss carped about the time he spent playing cricket, he accepted a public service job arranged by Doc Evatt, the deputy Prime Minister of Australia.

8. Having made his debut in New Zealand, Lindwall fell ill during his first home Test. He was afflicted with chicken pox. However, he was back for the third Test, driving fiercely in a 90-ball 113-minute 100 with 13 fours and a six. And in the fifth Test at Sydney he picked up 7 for 63 in the first innings.

9. Lindwall endorsed equipment made by Shaw and Shrewsbury, the old British firm started by Alfred Shaw and Arthur Shrewsbury. However, he received only bats in lieu of royalty. He later on-sold them.

10. He made his reputation during the post-War years as a hostile fast bowler, especially in the two Ashes series. However, it was not only sheer pace and intimidation. In 1949-50, on the South African tour, Lindwall felled Eastern Province s Ray Connell with a bouncer. The ball glanced off from behind the batsman s ear and fell on to the stumps, dislodging the bail. However, Lindwall glanced at captain Lindsay Hassett. At the skipper s signal, and noting that umpire Peter Prim was also looking elsewhere, Ian Johnson strolled from slip and replaced the bails so that Connell could resume his innings later.

11. During the 1947-48 tour of Australia Vinoo Mankad had been bowled by Lindwall for four innings in a row. All of them had been yorkers on the off-stump. On the eve of the third Test, during a cocktail party, he asked Lindwall what he was doing wrong. The fast bowler, perhaps mellowed by drinks, explained that he had been coming down late on the yorker, and possibly less back swing would help. The next day Mankad made 116.

12. In 1952, Lindwall signed a contract in the Lancashire League with Nelson. It amounted to 1,300 with free accommodation and regular post-match collections.

13. In 1953, the cricket-mad Australian Prime Minister Robert Menzies penned the following couplet in the honour of Lindwall: Lindwall with versatility inhuman/ Bowling his slows faster than Fred Trueman.

14. In 1956, Lindwall was quite past his prime when he toured India, but had quite a successful outing. It was also during this series that he captained Australia in a Test. An imaginative and successful captain of Queensland through two seasons, Lindwall was not really eager to have the Australian job. But with Johnson, Keith Miller and Ron Archer injured he did have to step up on to the hot seat. The Test ended in a draw.

15. Lindwall met model Peggy Robinson at a Slazenger party for Bobby Locke during a Gabba Shield match in October 1950. They got married nine months later.

16. When Peggy Lindwall got homesick for Brisbane because of Ray s frequent absences from their home in Sydney, the Lindwalls moved to live with Peggy s parents in Queensland during the Shield seasons. After his playing days, Ray ran a flower shop in Brisbane with Peggy. It was certainly a curious profession for a terrorising fast bowler; but then, there was that poetic action

17. Lindwall had retired by the time the first ever Tied Test was played at Brisbane. Just after the incredible match was over, a man came to him asking whether it was the first Tie ever. Unsure of the correct answer, Lindwall said that probably Ties had taken place in India and Pakistan. Soon after that, O Reilly approached him, saying that Don Bradman had just told him that it was the first Tied Test in history. Lindwall sought out the man who had approached him and told him, Sorry if you had a bet on it. Don has said it s the first Tie and so, even if it wasn t, they ll now change the records.

19. The 1961 Old Trafford Test has gone down as one of the thrillers in Ashes history, with Richie Benaud skittling England in the second innings with leg-breaks sent down from round the wicket. However, it is scarcely recounted that the move was a result of a discussion Benaud and Lindwall had on the eve of the final day.

20. Lindwall s charming autobiography is, quite aptly, named, Flying Stumps. The last words in the book state: Come what may, cricket has given me a wonderful life. I would not have changed a minute of it. 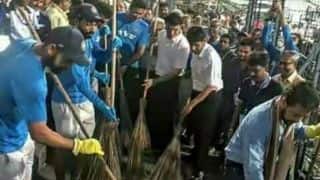