It seemed a curious case of the New South Wales selection bias, something strongly professed by few legends of the game.

Michael Bevan, one of the legendary limited-overs batsmen, had an abrupt end to his cricket career in mid 2004. It couldn’t have been because of poor form, because he had scored at an average of 48.16 in 32 One-Day Internationals (ODIs) in the year before that. It couldn’t have been because of fitness or age either. He was 34 and still one of the finest runners between the wickets. Michael Hussey was nowhere in the picture to replace him from the role of finisher. It took a year and a half for him to emerge onto the international scene.

It seemed a curious case of the New South Wales selection bias, something strongly professed by few legends of the game. This belief strengthened after players and public at large strong resented over New South Wales players getting preferential treatment in national selection.

In the summer of 2004, Bevan had moved from New South Wales to Tasmania to play in the Sheffield Shield. He never got a chance to represent Australia again. In fact, in the year 2004-05, he scored 1464 runs — domestic record in Pura Cup, at an average of 97.60. He was even named the Pura Cup Player of the Year, but national selection never happened.

David Hookes voiced his angst as early as 1980s. He had said, “When they give out the Baggy Blue cap in New South Wales, they give you a Baggy Green one in a brown paper bag as well to save making two presentations.”

As much as the system in India and West Indies continues to be plagued with regional bias, Australia isn’t too alienated from it. While political and geographical circumstances have given rise to regionalism in cricket in India and West Indies respectively, there is no definite reason as to why players from certain parts of the country are favoured. But sadly, even the strongest of cricketing set-up is ailing by this regional bias.

Recently, Matthew Hayden went on record criticising his former captain Mark Taylor for keeping him out of national selection even when he was scoring heavily in domestic cricket. He accused Taylor of favouring his Blues teammate Michael Slater, even though he was an inferior batsman to the Queenslander.

One of the more strong voices against the selection bias to have emerged in recent times is Brad Hodge. One of the heaviest run-scorers for Australia in recent times, Hodge too squarely blamed his non-selection in the Australian side to the New South Wales Selection Bias.

“I guess every time that I was on tour I was a threat to someone else from a different state… I was looking to take someone else’s spot. So they had allies and friends in that particular squad. For example in 2005, Simon Katich was struggling. So the chances were, if I was to bat, I was going to take his spot in the middle order. And that’s the reality,” he was quoted as saying in Herald Sun.

“But the reality is that it was only me as a Victorian, apart from [Shane] Warne, but we also had five or six, seven or eight New South Welshmen in that squad. ..When you’re not high up in the ranks, these people speak volumes about you in training and around the selection table and with the selectors. When you’ve got an opinion of a Brett Lee or a Michael Clarke … or a Glenn McGrath, their opinion matters most,” he further added.

And there couldn’t be much wrong with Hodge’s assessment of the Australian selectors as he went on to play just six Tests despite scoring at an average of 55.88, including a double century. Why wasn’t he given a longer run despite stellar performances in domestic and Test cricket continues to remain a mystery.

There are enough facts and theories that have come into picture to state that the New South Wales Selection Bias is purely a myth. But even if regional bias has to be kept aside, there have been cases wherein the crowd hasn’t quite appreciated players from other regions. Adam Gilchrist, who had moved in from New South Wales to Western Australia, was meted out a harsh treatment by the Perth crowd when he replaced Tim Zoehrer. The fact that regional bias exists in Australia cricket is an argument that is hard to ignore. 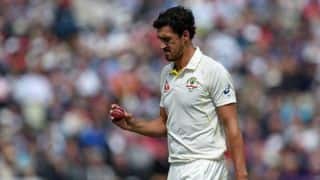