Rembrandt, Picasso would have been proud of Virat Kohli's Mirpur masterpiece!

Rembrandt, Picasso would have been proud of Virat Kohli's Mirpur masterpiece! 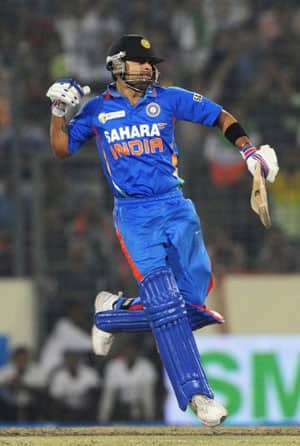 But having produced yet another masterpiece of which Rembrandt, Picasso or perhaps more aptly the spiky Jackson Pollock would be proud, we’ve run out of superlatives to describe Virat Kohli’s batting.

Not content with playing one of the best knocks witnessed in ODI cricket in Hobart just three short weeks ago, Kohli repeated the trick in Mirpur on Sunday with a staggering 183 off just 148 balls against India’s bitterest rivals in a must-win game.

Kohli has now stroked three hundreds in his last four one day innings and in two of those has helped India chase 320 in Hobart and now 330 against as decent a bowling unit as Pakistan. This takes his career average in ODI run chases to 58.40 in 48 innings with seven hundreds and 13 fifties. That makes him nearly as effective at chasing as Usain Bolt.

If we take Ryan ten Doeschate out of the equation as most of his runs have come against fellow Associate sides, Kohli is also one of only four batsmen in history to average over 50 in ODI cricket. Amla (56.49) and Dhoni (51.70) are two of these and the other is that other master of the run-chase, Michael Bevan (53.58). That Kohli doesn’t look out of place in that company says everything.

In terms of humility, losing the crassness and growing up, Kohli has a long way to go before he can be compared to the humble Tendulkar and United Nations Secretary General-in-waiting Rahul Dravid.

Kohli is too spiky, too prickly and far too obnoxious to ever probably do that, but in terms of his batmanship, India have a ready made replacement for Dravid at No 3 in the Test XI and a new champion to try and emulate some of what Tendulkar has achieved.

But as far as superlatives go, we’ve run out of those.