In 2001, he re-formed a reggae band called Big Dad Dread and the Baldhead with fellow Antiguan Curtly Ambrose.

Richie Richardson, born on January 12, 1962, was one of the most stylish batsmen of his time. He was West Indies most successful batsman in the late 80s and early 90s, and was among the best in the world.

Suvajit Mustafi lists out 12 interesting facts about the current West Indies team manager and the man, who acted as a bridge between two eras of Caribbean cricket glory and the slide.

Born in Five Islands Village, Antigua, Richardson was Richards countryman. Also he was burdened with a last name that made fans and media compare that he was here to take Richards legacy forward. There were also comparisons of them walking in the same style . Not easy for young man making his mark in Test cricket to walk into the shadow of one of the greatest ever, but Richardson by his own admission believes no two individuals can be alike and excelled by creating in his own identity.

Richardson started with tennis ball cricket, and then batted at number four at Ottos Comprehensive School, a side he also led. He was very defensive to start and never managed a hundred in school cricket. However, his technique was spotted by coach Guy Yearwood, who further tightened his defence and added to the strong foundation was a range of horizontal bat strokes. Yearwood would ask bowlers to bowl at him short and Richardson was soon breaking nearby tree branches with his hook shots. He went to develop as one of the most exciting stroke-makers in cricket world.

3. Stolen luggage and baggage of expectation

Richardson was only 21, when he was on his debut tour, and to an unfamiliar India. His luggage was stolen and he lost most of his clothes. Fellow Antiguan Andy Roberts said, He travelled for two weeks with hardly any clothes, and the management did hardly anything about it.

Also adding to it, he was a part of the team that comprised a hoard of legends. Not a certainty, he was ignored at nets. Talking of that tour, Roberts also added, Our batting order was: Greenidge, Haynes, Richards, (Larry) Gomes, Lloyd and (Jeff) Dujon. Richie was the third opener. He would come only after the bowlers had finished batting. He would have part-timers bowling to him. It was unfair to the young man to bat after the bowlers, and also, importantly, it was wrong for him to know he was not in the playing XI the day before the Test. I told him I would bowl at him to make sure he got some proper practice.

Replacing Larry Gomes in the fourth Test, he finally got his Test cap in Mumbai. Richardson was wrongly adjudged leg-before-wicket for a duck in his first innings against India at the Wankhede Stadium. In an interview given to The Barbados Nation, he laughed it off, It was another one of those decisions. The ball hit the middle of the bat and I could not believe the umpire gave me (out). It took him time to settle down at number three, but on his fourth Test, against Australia at Barbados, he smacked an unbeaten 131 and bettered that with 154 on his home ground in Antigua.

In April 1989, against India, Richardson scored a 99 with a broken finger at Port of Spain. Talking to CricketCountry, he said, I didn t think I would have played that game. Viv was captain at the time and said, Look you are in good nick. I want you to play. I said, If you want me to play, I will play. I was in a lot of pain and every time the ball hit the bat, I was in serious pain. But, I was playing for West Indies and always saw myself as a soldier. I saw the opportunity. In a poor deteriorating track, he scored a gritty 99 against a bowling attack that comprised Kapil Dev, Chetan Sharma, Ravi Shastri and Narendra Hirwani. He was the top-scorer and helped his side build the lead, a match which West Indies eventually won.

Late in 1991, Richards informed the board that he wanted to give-up captaincy and retire after the 1992 World Cup. He had picked batsman Desmond Haynes as his successor but the board chose Richardson to take over. Richards was dropped from the side and Richardson supported the board for dropping his former captain. This led to ill-feeling towards Richardson in Antigua, which was the home for both men.

7. When the iconic sun hat was replaced by helmet

Richardson was even booed at his home ground for his new headgear. Earlier, Richardson used to wear his trademark hat, which was white at the beginning and later the iconic maroon one. Richardson told CricketCountry his discomfort with helmet, When I started, there was no helmet available so I wasn t exposed to it. When helmet was introduced I was very uncomfortable using it. Even fielding close to the bat with the helmet on, I felt very uncomfortable. I backed myself and my eye-sight, my instincts.

However in the 1995 home series against Australia, West Indies lost the first Test by 10 wickets. The Australian pace attack shattered his self-confidence he appeared with a helmet on. The jeers continued for long as had done the unthinkable.

Not did an era end with Richardson sporting a helmet; West Indies also went on to lose the series 2-1. It was the first time that the West Indians had lost a series since their fateful tour of New Zealand in 1979-80. He wasn t the same batsman and was heavily criticised.

His career ended with the heart-breaking semi-final loss to Australia in World Cup 1996 semi-final. Post that he watched little cricket and turned to music. In 2001, he re-formed a reggae band called Big Dad Dread and the Baldhead with fellow Antiguan Curtly Ambrose. While Ambrose handled the bass guitar, Richardson did the rhythm and the band released several albums.

It s believed that Richardson loves seafood. In West Indies tour to India in 2013, Richardson, soon after arriving in Kochi, for the first ODI, went straight to Sea Gull restaurant at Fort Kochi to taste sea-food dishes.

In his days as captain, Richardson fondly called was often criticised for several reasons, but he remains one of the most liked and respected cricketers. In a recent column by Colin Croft, the West Indian star bowler wrote: I have great respect and admiration for Sir Richie, former WI captain. Perhaps he is just too nice and decent a guy, but, believe me, he has great toughness in his belly, blazing bazookas in his very analytical brain, to shrug off all flowing blowhards. Richie Rich is as steely as they come; a silent assassin!

Last year, Richardson, Ambrose and Roberts, all native Antiguans, were honoured with knighthoods. Richardson played 86 Tests and 224 ODIs for West Indies and led with distinction and currently the West Indies team manager. 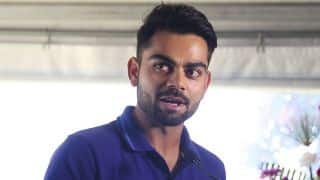 Dwayne Bravo and Kieron Pollard book to reveal it all