Ricky Ponting - the end of one of the greatest careers

Ricky Ponting - the end of one of the greatest careers

Ricky Ponting ranks among one of the greatest batsmen to have played the game. Love him or hate him, no one could deny the greatness at work when he took charge at the wicket. Arunabha Sengupta looks back at the 17-year career of the most uncompromising batsman of the modern era. 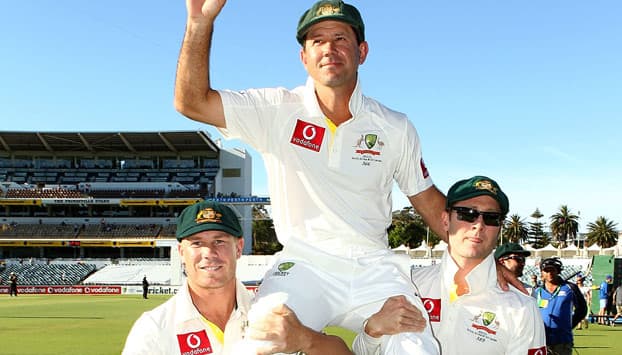 Ricky Ponting ranks among one of the greatest batsmen to have played the game. Love him or hate him, no one could deny the greatness at work when he took charge at the wicket. Arunabha Sengupta looks back at the 17-year career of the most uncompromising batsman of the modern era.

With Ricky Ponting calling it a day, the charm of watching Australians battle it out in the middle will undergo an exponential dip.

Millions used to remain glued to the game to watch him rock back and essay that imperious pull. And quite a significant number also lived in anticipation of the moment when he would walk back to the pavilion.

Not everyone loved Ponting. Some found him too uncompromising, too arrogant, at times too bloody-minded and sometimes strangely whiny, like the times when he was run-out by a substitute fielder or sledged by Harbhajan Singh.

However, few doubted his greatness when he stood at the crease, unflinching and daring. While he was piling runs for Australia, not many of the suffering sides would have relished the majestic drives through the covers. But, from a purely cricketing point of view, watching Ponting was always a momentous experience, because he knew only one way to play the game – with sustained aggression.

A Test match tally of 13,378 runs, complemented by 13,704 more in One-Day Internationals, propel him into a select bracket of greats – an exclusive club where membership will forever remain limited and craved.

Ponting had a long 17-year career, and a significant period of it was spent in an Australian side teeming with all-time greats. He used to bat alongside the likes of Mark Taylor, Michael Slater, Mark Waugh and Steve Waugh and later with Matthew Hayden, Justin Langer, Michael Clarke, Mike Hussey and Adam Gilchrist. It is no mean achievement that amidst these pillars of modern batting, Ponting stood above the rest as the premier batsman.

And while Sachin Tendulkar and, later, Jacques Kallis took the top layer of the batting world to rarefied heights that made it impossible to determine the leader with naked eyes, there was a significant period when Ponting without a doubt ruled the cricketing world.

The claim that he is the best Australian batsman since Don Bradman is dipped in all the flow of emotions – and, in some cases, agenda – of the current day. The rather unremarkable last four years of Ponting’s career makes the statement somewhat difficult to justify. Greg Chappell averaged 53.86 – the third highest in his playing days, while Ponting ends up as the 10th among his contemporaries with 51.85.
But there is no doubt that Ponting will find a place in any discussion of all-time great batsmen, the greatest who have lorded it over the 22-yards. For a phenomenal talent with a penchant for getting into disciplinary issues early in his career, this has been an epic journey.

While the pugnacious batting, the indomitable spirit and the signature of class can be dwelt upon for long, it may be worthwhile to look at his figures in some detail.

While there have been plenty of crests and troughs, as is expected in a career as long as Ponting’s, the playing days of the Tasmanian legend can be broken up into four distinct phases.
From the day he walked out for the first time in 1995 and struck 96 on debut against Sri Lanka at Perth, Ponting spent some time to cement his place in the side. The first few years were steady, but not exactly prolific. And till the summer of 1998, he managed 1377 in 24 matches at 38.25.

It was during the winter of 1999 that Ponting discovered his touch and spent the next one and a half years perfecting his skills. Till the summer of 2001, he scored another 1453 in 23 Tests at 48.53. This was followed by the six year stretch when he virtually ruled the cricket world. From the winter of 2001-02 to the summer of 2008, he scored runs with a belligerence and mastery that was virtually unmatched. During much of this period he was indeed the best batsman of the world. He played 72 Tests during this phase, and scored 7269 runs at 67.93 with 28 centuries.

This was also the period during which he added the second and third World Cup trophies to his kitty, scoring a blistering hundred in the 2003 final and leading his side to triumph in 2007. At this stage, his career stats stood at 10,099 runs at 58.37. It was also during this huge crest of his form that had experts like Ian Chappell predicting that Ponting would end up with all the batting world records worth having by the time he hung up his boots.

Unfortunately, things did not quite turn out that way. That winter onwards Ponting went through a dip almost as striking as the prolonged peak – and it lasted, with some minor aberrations, till the very end of his career. The last four and half years since the summer of 2008 yielded 3279 runs in 49 Test matches at 38.57. It was from 2008 that a 34-year old Ponting found his back and right wrist feeling the strain of the years, and short balls which were meant to be put away off the backfoot with élan started hastening to him that fraction bit faster which made all the difference.


When one looks at the last four years, the 49-Test dip is a real shocker. One can’t help remarking that Ponting is distinctly fortunate to have played for a country where the past does not hasten into oblivion as fast as it does in the subcontinent. Till the last day the fans and fellow players had nothing but immense respect for him, as his years of service to the country merit. And the final ovation that he got even after failing in his last Test was a fitting tribute to the master.

If we look at the way his scoring has varied from land to land, we find him phenomenal in Australia as expected, successful in most of the other countries, less than impressive in England and dismal in India.
Steve Waugh was of the opinion that the lack of bounce on the Indian wickets inhibited Ponting from playing his pull shots. His dismissal at the Eden Gardens in 1997-98 was particularly relevant and it took place even before the advent of Harbhajan. Ponting had accumulated a patient 60 before trying to pull a short ball from Anil Kumble, misjudging the bounce and having his stumps rattled.

He did not enjoy playing on the Indian tracks. One of the reasons was perhaps his not being a very good exponent of the sweep, one of the most important strokes on the dust bowls. Harbhajan got him 10 times in 14 matches.

His only hundred in India came in 2008-09, when Harbhajan was less of a threat than in 2001-2004, and Ishant Sharma’s bounce was proving to be more of an issue for the ageing master. However, at the same time, Ponting got plenty of runs against Muttiah Muralitharan in the neighbouring island nation.

His record in England does raise uncomfortable questions about his ability against top class seam bowling. Ironically, he did enjoy a good series in England in 2009, when he was already into the last phase of his career. The swing bowling in the 2009 series was of much inferior quality, but perhaps as the reflexes and reactions were beginning to fray, Ponting’s experience was weighing in. Ponting the captain ended up as the most successful ever, with 48 victories in 77 Tests. With a staggering 3:1 win-loss ratio, the numbers are indeed impressive. However, Ponting the captain also faced the brunt of criticism for the three Ashes defeats, two in England and one at home, and the final stumble in India in 2008-09.

While there were positives – selecting Jason Krejza and then backing him being one of them –there were too many critics pointing out his inability to utilise Shaun Tait, his curious tactics at Nagpur when Indians were struggling and other glaring tactical and strategic errors. There was also overwhelming condemnation of the way he and his teammates tried to influence the umpire at Sydney in 2007-08.

In the end, the general consensus is that Ponting enjoyed his success as a skipper when the team was full of champion cricketers, and the performance of Australia and his leadership triumphs fell away as these stalwarts left the game in a clutch.

One particular statistic will underline the truth of the assertion. In 24 Tests, Glenn McGrath and Shane Warne played together under Ponting. Australia won 19 of these Tests, drew five and did not lose a single one. In the remaining 53 led by Ponting, the side won 29 and lost 16.This was exemplified by the Ashes series of 2005, when Australia lost the lead and the series once McGrath walked on a ball during training.

Ponting ended up featuring in 108 matches won by Australia – a record by a big margin. Given a 168 Test career, that is a stupendous win proportion.

Contrary to some claims, however, this does not really make Ponting the greatest match-winner. He played in a very, very strong team for most of his career. Australia with Ponting scored at 39.00 runs per wicket and conceded runs at 27.31.

These figures demonstrate that the different players played for teams of drastically different batting and bowling strengths and the number of wins cannot be used for any meaningful comparison.

However, what the 108 wins do signify is that Ponting played most of his cricket for a great side, and winning became his way of life. And as the premier batsman of the side, Ponting did shape the destiny of the great team. They kept winning, and champagne kept flowing in the dressing room.

The number 108 does tell us that Ponting ended up with widest of smiles on that many occasions, more than any other player in the history of the game. He had a great time.

So did all those who got to watch him and his great teammates in action. 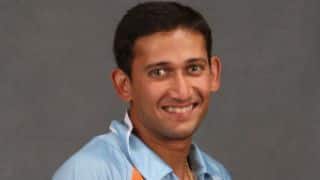 Ajit Agarkar: A career of exhilarating highs and inexplicable lows