The stocky Ridley Jacobs made his debut at 31, but went on to register many a record.

Ridley Jacobs was born November 26, 1967. The wicketkeeper-batsman from West Indies made his Test debut at 31. Yet, by playing with utmost diligence and showing commitment to the team’s cause, he carved a niche for himself in the world of cricket. Bharath Ramaraj looks back the career of the stockily built Antiguan.

Back in the 1991-92 season, when West Indies’ legendary wicketkeeper, Jeff Dujon announced his retirement from the game, the wicket-keeping slot was very much up for grabs. Ridley Jacobs, who had just started his domestic career with Leeward Islands, was said to be one of the long shots to be selected to play for the West Indies.

At that time, it was David Williams who got the nod. The Antiguan Jacobs though, with a tunnel visioned aim to play for the West Indies, continued to sparkle at the domestic level. Unfortunately for him, his unorthodox wicket-keeping and batting technique perhaps meant that the selectors continued to ignore his claims and plumped for inconsistent glove-men in Junior Murray and Courtney Browne. There was also an inkling that as for a while West Indies’ team was dominated by Antiguans, the selectors held a grudge against the new crop of players from that Island.

The stockily built Jacobs wasn’t your quintessential textbook wicketkeeper. Many times, he looked clumsy while taking catches and worse, even as a batsman, he seemed to have a technique more suited to baseball. However, whenever he played for the West Indies, he rarely let the team down. It also has to be said that Jacobs came across as a team-man who played with a ‘never say die spirit’.

If we turn the clock back in his career, Jacobs grew up in a very supportive family. He said, “Our family was very close. We grew up to love each other. Whatever was there, we partook of it together. I never really excelled in school. My mother always thought I would become something special, maybe a doctor or lawyer but it was never meant to be.”

Interestingly, Jacobs also got to wear the wicket-keeping gloves by accident, he said, “It so happened that normally when I finished from school in the afternoons, I used to go around to practice and help the senior guys in the village field. One day they gave me an opportunity to keep wickets and from there I never looked back. I was about 17 then.”

Jacobs made his way through the hard-grind of Junior cricket and made his First-Class debut for Leeward Islands in 1991-92. Actually, it was in the 1992-93 season when Jacobs made gigantic tidal waves in the Red Stripe Cup (West Indies’ Premier domestic competition) with a century against Trinidad and Tobago, then followed it up by taking five catches against Jamaica. When Pakistan toured the West Indies to play Tests and ODIs in 1993, he yet again impressed one-and-all by essaying a hundred in a tour game for the Board President’s XI.

Unfortunately for Jacobs, he had to go through the long road of lonely wilderness for the next five years of his career. Yes, he sporadically played a few ODIs against New Zealand in 1996, but he made his Test debut only during the ill-fated tour of South Africa in 1998. By then, he was already 31, yet, Jacobs was able to carve a niche for himself in the world of cricket. 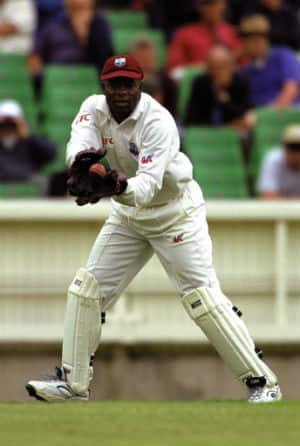 Even while West Indies was hurtling towards a 5-0 whitewash in the Rainbow Nation in 1998, Jacobs stood tall amongst the ruins by accruing 317 runs and took 19 catches. In fact, the columnist even after racking his brains struggles to remember him dropping a single catch during that series. Even during the 1999 World Cup in England, Jacobs surprised one-and-all by doing well in alien conditions.

What impressed the critics the most was how Jacobs waded through marshes and swamps during their tour of Australia in 2000-01. It was series in which the West Indies team was bullied and browbeaten into submission by the great Australian set-up. Despite all that, Jacobs was the one cricketer who kept performing for the West Indies team. On the trampoline wicket of WACA when West Indies were beaten for the first time at that ground by Australia in a Test match, it was Jacobs who with gladiatorial-like determination essayed a pugnacious knock of 96. The fortitude he showcased in that Test won him fulsome praise from everyone. It was also the tour when he created a world record by taking 7 catches in an innings at MCG. Another of those Tests that West Indies lost by a humongous margin to Australia.

When the pillaging South Africans toured the Caribbean in 2001, it was yet again Jacobs who touched noteworthy crusts in the series. The gratifying moment of his career must have come when he essayed his first Test hundred against a South African pace attack consisting of Allan Donald, Shaun Pollock, Makhaya Ntini and Lance Klusener at Bridgetown, Barbados. It was an innings that took West Indies from a spot of bother to respectability. By then, he had been anointed as the vice-captain of the side. He also took over the mantle of captaining the Test side during a series against Bangladesh in 2002, in absence Carl Hooper. Even in ODIs, he went onto captain the Caribbean set-up.

The sun-sets on Jacobs’s career

As the time went by, there were rumours that the West Indies selectors were looking for a younger wicketkeeper to replace the ageing Jacobs. Jacobs, though, continued to deliver the goods with sterling performances for the Caribbean team. In the Test series against England played in the Caribbean in 2004, Jacobs was one of the few batsmen who stood up to the might of a formidable English pace-attack. However, the West Indies selectors seemed to be hell bent to wield their axe on Jacobs’s career.

A few failures in the abridged version of the game and him flopping miserably during the tour of Old Blighty in 2004 meant that he was dropped from the side. The tour to England in 2004 sadly turned out to be the last time one saw Jacobs playing for the West Indies.

Inspite of having to battle through a haphazard selection-policy, Jacobs went onto become only the second wicketkeeper from the West Indies to effect 200 dismissals in Test cricket. His batting average of 28.31 in Tests may not look too impressive. However, he penned most of his knocks when West Indies found themselves in depths of despair. His resplendent performances with the willow helped West Indies many times to come out of rough-terrains and touch the sunny uplands. In short, West Indies now would love to have a wicketkeeper like Jacobs who played with a single-minded focus of contributing to the West Indies’ cause every-time.