On Sunday, as Australia crashed to a heavy defeat at Lord’s, a venue where they hadn’t lost for 75 years previously, its cricket board apparently couldn’t wait to tell the world what a success the Big Bash League (BBL) Twenty20 competition had been. It waxed eloquent about the success of CA’s strategy for BBL, its appeal for people who had not followed cricket previously and its entertainment quotient. 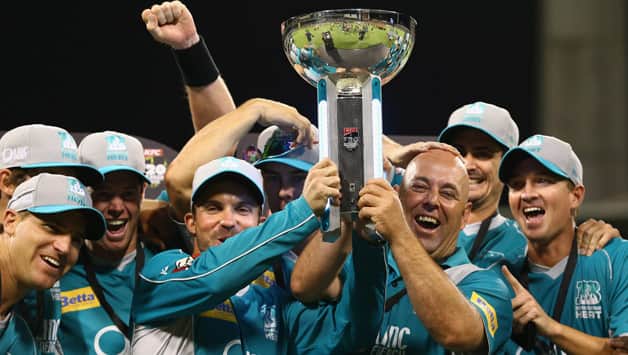 The most important piece of news concerning The Ashes 2013 has nothing to do with England or Australia’s performance on the field.  Nor even on the all important matter of what David Warner and the rest of Twitterati have had to say about it through their latest 140 character soundbyte. It is instead an announcement by Cricket Australia (CA) that quietly crept on us while we were deeply engrossed in the premier contest of Test cricket.

On Sunday, as Australia crashed to a heavy defeat at Lord’s, a venue where they hadn’t lost for 75 years previously, its cricket board apparently couldn’t wait to tell the world what a success the Big Bash League (BBL) Twenty20 competition had been. It waxed eloquent about the success of CA’s strategy for BBL, its appeal for people who had not followed cricket previously and its entertainment quotient.

Oh, by the way, the proverbial cherry on the cake duly arrived in the form of the news of James Pattinson being signed up by Melbourne Renegades, on the same day that he was ruled out of the rest of the Ashes — hopefully, just the England leg.

Whoever handles publicity for CA must be a genius. Surely, there couldn’t be a better time than when the Australian Test team tests new depths of mediocrity than to make the board’s priorities clear once and for all. If the Ashes promise to be anti-climactic, who needs lip service to the pre-eminence of Test cricket. No, as Brydon Coverdale observed in his brilliant article on the subject, BBL is where it’s at.

At the height of the Indian Premier League (IPL) and the Indian public’s apparent disdain for long form cricket, purists observed that Test cricket would remain alive in the two nations that played it originally, England and Australia. Well, this Public Relations coup by CA makes the Board of Control for Cricket in India (BCCI) look like traditionalist dinosaurs in comparison!

And you can see that they have got their priorities exactly right. After all, how can an ancient Test tournament that has long since outlived its British Empire baggage hold up the publicity drill for the BBL, the one that (officially) promises to follow in the footsteps of the IPL. Now we know why the ‘rebuilding’ effort of the once great Australian Test team is taking seemingly forever — there is precisely no such thing.

So what happens now that Australia has let the cat out of the bag? Where do purists turn to for hope for solace? England, the land of Alastair Cook and Joe Root, right? And while they do so, they would be well advised to read Graham Gooch’s words carefully. The former England opener and current batting coach conceded that Twenty 20 is chipping away at Test skills. He has warned that this issue will be well and truly alive long after he’s through.  That’s assuming Test cricket is alive and well for that long.

If you too are a ‘traditionalist’, as Gooch calls himself, you would be well advised to chuck that complacent “Test cricket has survived the World Wars” line and savour what you get to watch of it in the near — and hopefully distant — future.  For the powers that be are this close to calling time on an archaic relic that eats up the calendar and gets in the way of the ‘real deal’.

(Madan Mohan is a 27-year-old chartered accountant from Mumbai.   The writing bug bit him when he was eight and to date, he has not been cured of it.  He loves music, cricket, tennis and cinema and writing on cricket is like the icing on the cake.  He also writes a blog if he is not feeling too lazy at http://rothrocks.wordpress.com/)

India in Zimbabwe 2013: Virat Kohli has to pick and choose his bowlers wisely