Roald Dahl, born September 13, 1916, remains one of the most popular children’s authors of all time (although he also wrote books for adults)

Roald Dahl, born September 13, 1916, remains one of the most popular children’s authors of all time (although he also wrote books for adults). Michael Jones celebrates the centenary of his birth with a bottle of frobscottle — and a whoopsy whiffling XI of his characters.

Roald Dahl shared his country of ancestry, Norway, with one Test cricketer, ‘Buster’ Nupen. A children’s biography of him, Roald Dahl: the Champion Storyteller by Andrea Shavick, recounts that he also played the game whilst at school, along with football and squash. Besides the fact that Nupen reached Test level but Dahl never progressed beyond playing at school, there were other notable differences between the two: Nupen was born in Norway and emigrated to South Africa as a child, whereas Dahl was born in Wales but grew up speaking Norwegian as his first language. Additionally, Dahl, unlike Nupen, retained the full use of both eyes throughout his life.

He had a penchant for choosing unusual names for his characters, which makes it somewhat more difficult to pick a cricket team from among them: unsurprisingly, no-one named Augustus Gloop or Bruce Bogtrotter has ever graced a cricket field. Nevertheless, with a little searching it is possible to find an XI…

The three nasty farmers in Fantastic Mr Fox were probably better suited to multiday cricket, as the book ends with them waiting for the fox to emerge from his hole and the author stating that “So far as I know, they are still waiting.” T20 players would surely not have shown such patience, but, after their earlier efforts to dig it out had failed, dived straight into the hole to find the fox.

The description of their physiques as respectively “one fat, one short, one lean” suggests that Boggis may have been compelled to work on his fitness before being considered for selection in the modern era, with the days long gone when Warwick Armstrong and Colin Milburn were able to succeed at Test level despite their bulk.

Given the number of the game’s greatest batsmen who have been shorter than average, Bunce would have stood a greater chance of success, while Bean’s height would enable him to gain bounce — although his coach might insist that he cut down on his excessive consumption of cider.

All three have cricketing namesakes: Eleanor Boggis played regularly for Hertfordshire Girls’ Under-13s in 2009 and 2010, with a highest score of 48 against Suffolk, although the generally low scores and number of wides conceded suggest that the standard of the inter-county competition was not particularly high. William Bunce made it to a higher level of the game, playing county cricket for Somerset in the years before the Second World War; in a haul of 3 for 81 against Surrey in his second match, he claimed Andy Sandham, Test cricket’s first triple centurion, as his maiden First-Class wicket. George Bean played 3 Tests for England against Australia in 1891-92, when a round 50 on debut made him joint top scorer in the innings with none other than WG Grace. He enjoyed a successful career as an all-rounder at county level, making 9 centuries and achieving a best innings analysis of 8 for 29, and later became a First-Class umpire.

One imagines that Dahl’s Matilda would have been rather good at cricket if she had been inclined to try it: the power of telekinesis would be a significant advantage in any ball-game: simply release the ball, concentrate on it, wait until the batsman has committed himself to a shot, then use one’s powers to push it in a different direction at the last moment and onto the stumps. Unfortunately for Matilda Brereton, she lacked the same power, but still captained Herefordshire junior teams in the mid-2000s.

In The Giraffe and the Pelly and Me, it was the owner of Hampshire House who required the services of the Ladderless Window Cleaning Company. Dahl chose a title for his character which has never actually existed in the British peerage, so there is no Duke of Hampshire, but there is a Duke who played for Hampshire. The title held by the Sackville family was actually Duke of Dorset — a county bordering Hampshire — and it was the third Duke who was both a keen player and a leading patron of cricket in its formative years of the late eighteenth century. It was playing against Hampshire, though, that he made his highest score of 77 in 1774 — in an era in which runs were rather harder to come by than now, with the first First-Class century not recorded until the following year. In his position as ambassador to France, he arranged what would have been the first international tour — but the year he chose for it happened to be 1789, and the touring team had got as far as Dover when word reached them that a revolution had broken out in Paris, forcing the cancellation of the tour. The Pelly would no doubt have made an excellent fielder, with the advantage of being able to catch the ball in his beak — and as well as providing salmon, walnuts and Tinkle-Tinkle Trees, the grounds of Hampshire House should have had plenty of space for a cricket ground.

Shuckworth, Shanks and Showler were the three astronauts who piloted the Transport Capsule in Charlie and the Great Glass Elevator, taking staff to the Space Hotel. There is no cricketing Shuckworth, but the other two have namesakes: Andy Shanks has been a regular player for Sussex over 60s in inter-county senior competitions in recent years, taking the final wicket as they beat Kent by 162 runs to take the national title in 2007, while James Showler bowled for St Lawrence and Highland Court in league cricket in Kent in the early 2010s.

The orphan removed from her room by the BFG proved to be a skilled tactician, devising a plan to defeat a team of man-eating giants: perhaps she could apply the same acumen to removing opposition batsmen. In a decade-long career for New Zealand, Sophie Devine has also demonstrated the ability to defeat giants, most notably with 145 against South Africa in the 2013 World Cup, an all-round performance of 3 for 24 and 48 to fell Australia in a T20I in 2010, and 70 off 22 balls against India in 2010 in the course of which she recorded the fastest fifty in women’s T20Is (off 18 balls) and smashed the hapless Sneh Rana for 32 in an over. In an era when double internationals are becoming rare, she has also represented her country at hockey.

Although the giants played catch with the BFG, a being fifty feet in height could have difficulty gripping an object as small as a cricket ball — not to mention having to reach down far enough to play any ball at stump height. The list of their names does not seem a promising one from which to find any cricketing namesakes: no Fleshlumpeater, Bonecruncher or Gizzardgulper is ever likely to feature in a starting XI.

However, a little artistic licence could identify Alan as the Butcher Father and thus Mark — whose 71 Tests give him the curious record of the most played in the ODI era without playing an ODI — the Butcher Boy. On one memorable occasion, he feasted on Australian bowlers: after three matches of the 2001 Ashes, the visitors were 3-0 up and had their sights set on becoming only the second team ever to win a Test series 5-0 away from home. In order to keep alive their chance of a whitewash, Adam Gilchrist — standing in as captain after an injury to Steve Waugh — risked a third-innings declaration with a lead of only 314. Butcher tucked into Glenn McGrath, Jason Gillespie, Shane Warne and Brett Lee, helping himself to an unbeaten 173 as England won by 6 wickets. Another Butcher Boy, Gary, started his county career with Glamorgan before subsequently joining Mark at Surrey.

The Gregg family were keen duck-hunters, before the treatment dealt to them by the eponymous Magic Finger served to change their attitude towards that activity. Norman Gregg also made the acquaintance of a duck, being dismissed for one by John McAndrew in his third and final First-Class match for New South Wales; his brother Hugh also played for NSW, but only on a tour of Ceylon in 1914 in which the matches — most played at odds, with the 11 tourists facing local teams of up to 18 — did not have First-Class status.

Centipede, Earthworm and Grasshopper may not have featured on scorecards, but the oversized fruit on which they took their voyage did: Herbert ‘Harry’ Peach played for Surrey between the two World Wars. He was known as a big hitter; a shot from Peach might well have flattened any cruel aunts who stood in its way. Against Northamptonshire in 1920 he battered a career-best 200*, more than holding his own while Percy Fender at the other end blitzed a 35-minute century — still the fastest in a First-Class match in uncontrived circumstances. He was primarily a bowler, though, and four years later he took eight for 60 against Sussex, including 4 wickets in 4 balls — and was deprived of the chance to secure a unique place in cricket history when the debutant Jim Parks was dropped off the fifth. 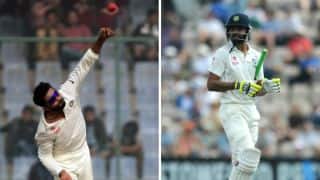 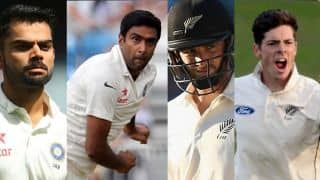