In a freewheeling chat, Roger Prideaux reminisces about his battles during his playing days.

Had Roger Prideaux, born July 31, 1939, not been down with pleurisy in 1968, sport in South Africa would have taken an entirely different turn. Prideaux also married Ruth Westbrook: they became the first husband and wife to play Test cricket. Abhishek Mukherjee talks to the Northamptonshire mainstay about his playing days, growing up in Bombay, opening with Colin Milburn, witnessing political unrest during Bangladesh’s War of Independence, and his ultimate golf dream.

The elegant yet reliable Roger Malcolm Prideaux went on to have a distinguished career as an opening batsman for Northamptonshire, Sussex, and Orange Free State. He also played three Tests for England. CricketCountry managed to catch up with him in an exclusive interview.

CricketCountry: Though you were born in Chelsea, you spent your childhood days in India in a period of turmoil. Please recount your experiences in the final days of British Raj in India.

Roger Prideaux: My father had worked in India for 27 years. Soon after my birth (in 1939) my brother and I spent about six years at Peddar Road in Bombay. My father’s office was very close to Bombay Gymkhana, and he was associated with Bombay Cricket.

CC: You came back to England after Indian Independence before going on to play for Cambridge University. The First-Class debut against Surrey was almost baptism by fire. Batting against Peter Loader, Jim Laker, Tony Lock, and Eric Bedser was no easy task. What was it like?

RP: Oh, it was a big moment. The strangest bit was perhaps the fact that I ended up playing golf with Ken Barrington on my first day of First-Class cricket! It was a shirtfront wicket. Talking of Bedser, I also played against Alec Bedser (in later matches), who had huge hands like a bucket. He hit the deck hard, swung the ball late, and as University students we had no clue.

CC: Ted Dexter was your first First-Class captain (in the match against Surrey). What was playing with him at college like?

RP: Dexter was already a star by then. He was a schoolboy hero of mine, and playing it him was an experience. There was this air about him that made us almost worship the ground on which he had walked.

CC: You were a crowd-puller on the famous Canada tour of 1959. Take us through the experience.

RP: The cricket was not all that difficult, but it was an excellent experience. Canada is a beautiful country. As for the cricketers, they were mostly West Indians, but there were a few expatriate Brits as well. There were also probably a couple of Indians.

CC: That tour also saw Dan Piachaud wreak havoc. He is often considered Sri Lanka’s first mystery spinner. What was he like?

RP: We played each other in the Varsity matches a lot. Piachaud was not really a “mystery bowler”. He had a long-run up, and often bowled a ball that drifted away towards the slips. He was not very difficult to pick. He was also a nice person.

CC: Then there was that famous chase against Somerset in 1960, where you had scored hundreds in each innings, and had set up the 268-run chase (an achievement for a University team) with Tony Lewis…

RP: It was not much of a challenge, as the wicket was flat. (Graham) Atkinson and (Roy) Virgin added 172, and along with me Lewis and Michael Willard had also scored hundreds in the first innings. They set a stiff target, but we kept on talking to each other and added 137 for the opening stand. Willard also did well, and we won easily.

CC: You and Colin Milburn became an iconic opening pair for Northamptonshire. What was he like?

RP: Oh, I have never seen a man of his size move so quickly. He moved very fast, and hooked very hard: he was one of the best exponents of the shot. Batting with Milburn meant that there was no pressure on you: all you needed to do was to give him the strike. A relatively lesser known fact was that he was an excellent short-leg fielder with amazing reflexes, and he did so without any protective gear.

CC: The Test debut was special, scoring 64 and adding 123 with John Edrich. You never looked like getting out before Gleeson pulled off that miraculous catch. Take us through the innings.

RP: I was doing a decent job before I tried to sweep John Gleeson, which was a mistake on a turning track. Eric Freeman stretched himself over his shoulder and took an excellent catch at deep square-leg. I was confident of getting a hundred on debut till then.

CC: Pleurisy made you missed the next Test at The Oval. Basil D’Oliveira played, and the subsequent incident changed the course of history of sport in South Africa. Take us through the entire incident.

RP: I was down with pleurisy and a severe bout of bronchitis. I had to pull out of the final Test at The Oval. D’Oliveira played instead. He did not do well in West Indies earlier that year, but got a chance — mostly because the line-up looked a bit bowler-heavy. He scored a hundred and took a crucial wicket in the fourth innings as Derek Underwood ran through Australia and we squared the series. The rest is history.

CC: You toured Pakistan amidst political turmoil (during Bangladesh’s struggle for Independence). How did it go?

RP: We had a small tour of Ceylon before visiting Pakistan. Once there we landed up amidst a revolution. We did not want to go to Dhaka for the first Test, but they insisted we go. Once we were in Dhaka some students assured us to go on without fear: “we will look after you.”

I did not do well at Lahore or Dhaka. At Lahore a ball from Pervez Sajjad pitched on leg-and-middle, turned viciously, missed my bat, missed the wicket-keeper, and went to Hanif Mohammad at first slip. There was no referrals those days, and it remained the last dismissal of my Test career.

I was dropped for the next Test at Karachi. Milburn was picked, and he scored an excellent hundred. When we were 502 for 7 on Day Three, a group of about 25,000 students invaded the ground and dug up the pitch. Poor Alan Knott could not believe it even when we landed in Heathrow: he was not out on 96 when the pitch invasion took place!

CC: Why did you move to Sussex?

RP: A few incidents happened in my life; some situations changed; then Sussex offered me a chance, and I accepted it. I became a good friend of John Snow.

CC: What made you shift base to South Africa (he currently stays in Cape Town)?

RP: My second wife was from Bloemfontein, and I decided to move. I took up a job outside cricket, but I still played for Orange Free State for a couple of seasons.

CC: Were you connected to South African cricket?

RP: Yes, as a radio commentator. I commentated during the Test in 1996-97 when Sachin Tendulkar (169) and Mohammad Azharuddin (115) both made hundreds. That has to be one of the greatest batting performances I have seen. Also, Nelson Mandela visited Newlands that day, so it could have been that they put up the performance to celebrate his presence!

CC: Of late many South African cricketers have played for England. What do you think is the reason for this?

RP: I do not feel good when they keep telling me here “Yet another South African is playing for England now,” but let us face it: South Africans were born to play sport. They are good in any sport they try their hand at, be it rugby, tennis… they have some excellent cricket training schools here, and the superiority is showing.

CC: Do you have plans of coming to India?

RP: It is interesting that you ask. Gary Kirsten is a very good friend of mine, and our wives are very good friends as well. We often play golf together. Kirsten now coaches Delhi Daredevils, and asked me whether I can come along with him next year. I would really like to go there for a couple of weeks, especially to visit Bombay. That is certainly one thing on my bucket list.

CC: What else is there on your bucket list?

RP (chuckles): I need to do a hole in one. Can you believe I had never done a hole in one despite playing golf all these years? That has to be number two on the list! 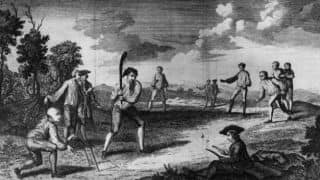