In pursuit of defending the title, India may put Rohit and Rahane permanent at the top.

Shikhar Dhawan has had a tough tour to Australia and his struggle is a worry for India ahead of the ICC World Cup 2015. With Rohit Sharma out injured, Ajinkya Rahane has opened the batting with Dhawan. Devarchit Varma feels India should persist with Rahane at the top and he should partner Rohit when he returns.

So far, on this extremely important tour of Australia, India’s dashing opener Shikhar Dhawan has looked completely out of sorts. Across formats (including warm-up games), the left-handed opener has scored only one half-century — that too when he resumed his innings down the order after retiring hurt. Perhaps, he could be sent down the order. With India under pressure to defend their title at the ICC World Cup 2015, they may consider making Rohit Sharma and Ajinkya Rahane their settled opening pair.

Dhawan is not the most technically sound batsman who would drop the anchor and allow the others to construct the innings around him, but he is someone who will come out and derail the opposition bowling attack with a swashbuckling display of strokes. Dhawan is an attacking batsman who likes to go for his strokes and not get intimidated by the opponents or the occasion. Though he failed in Test cricket, there was always hope of him doing well in One-Day Internationals (ODIs). The three consecutive failures have only created more doubts.

Dhawan has been found short wanting outside the of-stump. The extra pace and bounce that the Australian pitches provide to the bowlers too have caused worries for the Indian batsman. But that does not mean they get rid of him entirely.

In comparison to Dhawan, both Ajinkya Rahane and Rohit Sharma have tighter techniques and are the ones who can be expected to convert starts into real big knocks, once they have settled in. Both Rahane and Rohit have also proved their mettle in the opening slot, with the former excelling in England when the latter was away. Rohit then reclaimed his spot back in India when he smashed a mind boggling 264 against Sri Lanka.

Both Rahane and Rohit have scored runs off late, and they aren’t the ones who have struggled persistently on the bouncy and fast tracks of Australia like Dhawan. Rohit, in fact, scored a fine century in the first match of this ongoing triangular series, suggesting that he has put the disappointment in the Test series behind him and is ready to do the job for his side as they prepare for the ICC Cricket World Cup 2015.

Meanwhile, Rahane has raised some concerns for India as at times he has looked a little edgy at the crease. He has also squandered a few starts on the odd occasion, but hasn’t struggled like Dhawan. The left-handed batsman can do himself and team a favour if he comes down the batting order, and play at a position where the fast bowlers are not at their full throttle and the innings has already got some kind of start. Dhawan’s early dismissals are certainly not doing India any good, and his poor form has only added to India’s problems ahead of the World Cup 2015.

Rohit is likely to miss the rest of the triangular series as well as the warm-up matches in their lead up to the ICC Cricket World Cup 2015, but purely on merit of form and runs scored in the recent past, Rahane certainly can get a shot at the opening spot in the early stages of the tournament. 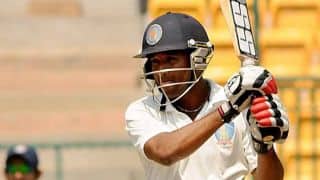