The sheer sight of Amir running in to bowl at a clearly disturbed Indian top-order was terrifying for the fans. For that half an hour an entire country — along with her neighbours — had forgotten to breathe normally.

Rohit Sharma knows what he was doing. True, he could have fallen first ball to Mohammad Amir after the latter came steaming into him at Asia Cup T20 2016. He survived a huge appeal first ball. Replays suggested that the decision should have gone Pakistan’s way. Rohit did not survive the second ball. Ajinkya Rahane survived one ball. The next over saw Suresh Raina surrendering meekly. The sheer sight of Amir running in to bowl at a clearly disturbed Indian top-order was terrifying for the fans. For that half an hour an entire country — along with her neighbours — had forgotten to breathe normally.

It took one of the best innings of Virat Kohli’s career to settle the match in India’s favour. The Amir versus Kohli contest was of the highest order. After a contest as intense as any, Kohli came out with the words, “He is a world-class [bowler]. If he had played in the last five years he would have been among world’s top three. He has lot of skills as a bowler. He is a very good bowler. He has a lot of talent, has got pace, bounce a very good yorker.”

Things were going the usual way till Tuesday, when Rohit called Amir “just a normal bowler who was good on that day.” He added: “I don’t think we should go gaga about him. Let him perform for one more year and we will see whether he deserves so much. Woh koi… (I don’t want to use those words). He’s good but he needs to prove himself again and again. It’s not right to hype him so much after just one match. Not just for him or who are watching it, let him do it over and over again.”

The problem is, Amir actually did it over and over again. He rattled UAE with 4-1-6-2. Even if one ignores that spell, he bowled two terrific deliveries against Bangladesh, albeit in a lost cause, to dismiss Soumya Sarkar and Shakib Al Hasan. The ball that hit the base of Sarkar’s stumps would probably have dismissed any batsman.

As I have mentioned, Amir had gobbled up Rohit when they had locked horns in the tournament. Some would say that the dismissal robbed Rohit of the right to comment on Amir. That is equivalent to stating that Sachin Tendulkar is not allowed to comment on Shoaib Akhtar or Brian Lara on Waqar Younis, for the reason that Tendulkar and Lara have been bowled by Shoaib and Waqar. That makes no sense.

Of course Rohit is allowed to pass his judgements. We, armchair critics, saw Amir bowl from the comfort zone of our television sets. Rohit actually faced him. He certainly knows better than us.

But… “just a normal bowler who was good on that day,” Rohit? Was that not stretching things a bit too much? Even if we assume — for the sake of argument — that your dismissal that match was an aberration, Rahane or Raina may not agree with you, and neither will, in all probability, Sarkar.

Of course, Rahane or Raina or Sarkar do not make up the world of cricket. I agree Amir has a long way to go to prove that he is nothing short of special. He has to come out on top in battles with AB de Villiers or Kane Williamson or Alastair Cook, or closer to home, Kohli, the man who had nothing but praise for Amir .

What worries me, however, is what Rohit says: “Instead of talking about Amir you should talk about Jasprit Bumrah… He’s a rare talent… He’s an exception.”

Seriously, Rohit? You may not think Amir is world-class, but if he is a “normal bowler who was good on that day,” do you really, really think Bumrah is “a rare talent”, “an exception”?

Admittedly, Bumrah has been excellent in his only ODI (10-0-40-2) and across 11 T20Is (15 wickets at 16.20, economy rate 6.15). If you ignore the sample size, the numbers are better than Amir’s. With his unusual action, lethal yorkers, and canny variations of pace, Bumrah has been a breath of fresh air for India — a country that has been in perpetual search for a bowler who can bowl at the death.

But, wait… did you not say “let him perform for one more year and we will see whether he deserves so much” about Amir? Should that not hold for Bumrah as well? How can you rate Bumrah so high after 12 international matches when you refuse to rate Amir after 9 since his comeback (56 overall)?

When he took England by storm in 2010 in more ways than one, Wisden left a slot for Cricketer of the Year empty. He took his time in the three T20Is in New Zealand, but found his groove in the ODIs, having figures of 17.1-0-67-5.

On what logic, then, Rohit, did you call Bumrah “a rare talent,” but Amir “a normal bowler”?

Of course, you are as entitled to make statements as we are; perhaps more, for you have faced both. Unfortunately, when it comes down to numbers, the data is the same for both of us.

Hence, we are a bit curious to know your reasoning. That is about it. 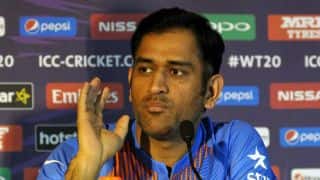 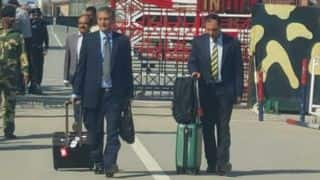 ICC T20 World Cup 2016: India-Pakistan relation shows cricket is not the winner after all