The modification to his technique has allowed Rohit to play the moving ball more effectively. He has always looked at ease against pace and plays the short ball particularly well. 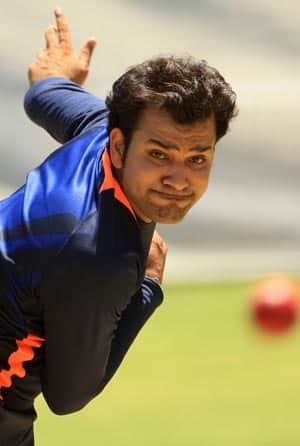 To his credit, Rohit Sharma has gone back and worked hard on his game — which has allowed him to resurrect  his career as an opener in ODIs © Getty Images

Two years ago, Rohit Sharma essayed one of his typically effortless cover-drives at the Brabourne Stadium during a Ranji Trophy game for Mumbai. Dilip Vengsarkar was watching the proceedings that day. He stood up to applaud Rohit’s brilliant shot and told a renowned journalist seated next to him, “He is the best I have seen since [Sachin] Tendulkar”. But within an over, Rohit was cleaned bowled while playing a reckless shot. Vengsarkar stood up, slammed the door and left the box stating, “When will this boy do justice to his talent?”

After watching Rohit’s master class against Australia during the seventh One-Day International (ODI)I at Bangalore, one can fathom Vengsarkar’s frustration that day. But, two years ago, the former India batsman had seen the best and worst of the enigmatic Rohit in the space of six deliveries. In the last six months, Rohit has been in splendid form. He has answered all his critics and proved that he has matured — enough to live up to the huge expectations. In hindsight, he may be blamed for wasiting opportunities at the highest level. But, had he been given a Test cap at the “right time” in the past, he could have perhaps been as successful as Virat Kohli.

The last time Rohit was in contention for a Test spot, he was forced to carry drinks for  months. He was picked for the third Test against West Indies at Mumbai in 2011. Although India had sealed the series during the previous game, they still persisted with the in-form VVS Laxman and Rahul Dravid instead of blooding in a youngster. The decision was even more baffling because India rested Umesh Yadav just to allow Varun Aaron a game.

For nearly two months on the tour to Australia in 2011-12, Rohit spent most of his time facing tired net bowlers and warming the bench even as  the legends of Indian batting failed miserably.  On the same tour to Australia, his team-mate, Kohli appreciated the value of each run in the white flannels and took on Australia with his typical swagger. Even with the series gone, the selectors retained VVS Laxman for the fourth Test at Adelaide, denying Rohit a Test debut and the opportunity to have a taste of the classical format.

To his credit, Rohit has gone back and worked hard on his game — which has allowed him to resurrect  his career as an opener in One-Day Internationals (ODI).  The improvements in his technique are apparent. He now stands more upright at the crease and the back foot moves   towards his off stump.  The backlift,  which used to come from  second slip, now comes down from the line of first slip first slip, allowing him to play a lot straighter.  Importantly, he has learned to build his innings. During the 2013 ICC Champions Trophy, the standout feature of his batting was the way he left the ball outside the off- stump.

The modification to his technique has allowed Rohit to play the moving ball more effectively. He has always looked at ease against pace and plays the short ball particularly well.  During the recent ODI series, he wasn’t rattled by Mitchell Johnson’s pace even as some of the other Indian batsmen struggled against the left-armer. To sum it up, Rohit has tightened his defence, which has enabled him to become a complete batsman.  Giving him the opening slot in ODIs has been an inspired call as it has helped him blossom as an all-round batsman. Despite having a very successful period during the course of the last six months, Rohit declared that a Test cap was his ultimate goal. He may have captained the Mumbai Indians to the Indian Premier League (IPL) and Champions League T20 (CLT20) titles, excelled as an opener during the ICC Champions Trophy 2013 and the following tournaments, but all along he yearned for the white flannels. “Absolutely it is my goal to play Test cricket, I have been waiting for the opportunity for six years now and if it happens, I will be the happiest person in this world,” he said.

Rohit has undoubtedly grown as a batsman over the last six months. At the age of 26, he has time to chalk out a good Test career and this series against West Indies will allow him to settle into the line-up. However, sterner tests await him, the first one being in South Africa.

(Gaurav Joshi is an Indian-born Australian who played with Michael Clarke in his junior days. He coaches and reports for a Sydney radio station. Over the years he has freelanced for Australia Broadcasting Corporation (ABC) and is a regular on ABC cricket show Cow Corner. He is the author of the book “Teen Thunder Down Under” – The inside story of India’s 2012 U19 World Cup Triumph)
a