He thus easily leads the list of batsmen with most sixes in an innings without scoring a century.

Ross Whiteley hit 11 sixes, but did not complete his century. Bharath Seervi lists the most sixes in T20 innings of less than 100 runs, in which Whiteley tops.

T20 cricket is designed for more fours and sixes, and neither 10 sixes nor hundreds is a rare phenomenon. But Ross Whiteley, batting for Worcestershire against Yorkshire at Headingley in NatWest T20 Blast on July 14, 2015, smashed 11 sixes batting at No. 6 to score an unbeaten 91 runs in 35 balls. In 22 previous occasions, whenever a batsman scored 11 or more sixes he had scored a century — but Whiteley became the first to hit 11 sixes in a sub-100 score.

Whiteley came to bat when team was struggling at 63 for 4 in the tenth over and changed the course of the match. He completed his 50 in 24 balls with a four and 6 sixes and finished with 91 not out in 35 balls with 2 fours and 11 sixes.

The below table lists highest number of sixes in an innings of less than 100 runs in T20 cricket.

Most sixes without scoring century in a T20 innings

This is not Whiteley’s first T20 six-fest. In the last NatWest T20 blast season he did smashed 84 not out off 38 balls against Derbyshire with 9 sixes. Chris Gayle is the other batsman to hit nine 9 in T20 innings of 85 or less in T20s. There are nine more occasions of a batman hitting 9 sixes in innings of less than 100 runs.

There are instances of batsmen hitting even 12 sixes before reaching a century but they went on to complete their century. Richard Levi and Nicky van den Bergh have done this in their innings of 117* and 101 respectively. Craig Williams scored 116 with 14 sixes but due to lack of ball by ball details it is not known how many sixes he had hit before getting to his century — but chances are high that he had hit 12 sixes before reaching 100 as well.

Lowest scores to include more number of sixes

–    Kieron Pollard and Arthur Kyobe also scored 36 runs with five sixes but they faced more balls than Nazmul Hossain, 15 each. 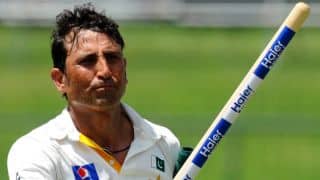 Younis Khan to continue playing as long as he enjoys it

Shahid Afridi: Only batsman to play five World Cups without scoring a half-century!