Except AB de Villiers, none of the top-4 fired in Qualifier 1 against Gujarat Lions

What a strange game Cricket is! A team like Royal Challengers Bangalore (RCB), who boast the best batting line-up in whole of tournament, collapsed in their most important IPL 2016 game against Gujarat Lions (GL). And their bowling, not really fancied by many, won them the match. While a loss in the Qualifier 1 would have still given them another chance to reach the final, AB de Villiers and bowling unit decided to pursue to the easier route. The South African’s extraordinary batting and Shane Watson’s brilliant bowling stole the show, which were the highlights of the win. If retrospection is done, RCB’s batting collapse would have served as a perfect wake up call for Virat Kohli and co. Full Cricket Scorecard: Gujarat Lions vs Royal Challengers Bangalore, IPL 2016 Qualifier 1 at Bengaluru

For starters, RCB boast on their batting unit, especially the top-4. Well, we can’t complain. After all, which team’s top-4 in the history of cricket can match the power, skill, techinque and prowess of Chris Gayle, Virat Kohli, de Villiers and Watson combined. On paper, even the worst of critics will say, the opponents are doomed. But that hasn’t been the case so far, not convincingly at least.

Kohli can officially now be used as synonym of consistency. Is there something this guy can’t do? He without a doubt is the most complete player of this decade. He has already beaten [shattered] Gayle’s record of most runs in a single IPL season. And guess what, he is trying to close in on 1000 runs in a single IPL season! These type of numbers are achieved in 2 years by great players and 3 years by good players. Despite all this, he scored a duck (yes, he did!) against GL in the Qualifier 1. No, we aren’t blaming him here, just stating the fact. ALSO READ: Virat Kohli and AB de Villiers: A club of mutual admiration

Another fact which can be stated is that de Villiers is Kohli 2.0 . Just like the RCB skipper, people have ran out of superlatives for ‘Mr.360’. And well, he deserves each bit of it. A total of 682 runs at an extraordinary strike rate of 170 is what he has achieved in IPL 2016. Above that, he has scored a century and six half-centuries, including the match-winning knock yesterday. So most definitely, he doesn’t need any wake up call.

But beyond these two, this is where RCB needs to have a retrospection. The ‘Universal Boss’, ‘Spartan’ Gayle is a IPL legend. Yet, this season, he has been very ordinary. A mere 151 runs from 9 games with just one half-century is all he has achieved. Even in such a crucial tie against GL, he failed, putting his side in huge trouble. Everyone knows the quality he possesses, but surely, he needs to be spoken with. ALSO READ: GL vs RCB IPL 2016, Qualifier 1 at Bangalore: Highlights

With the top-3 out of the way now, most of RCB’s batting is gone. The upcoming players haven’t had much chance to shine with the bat. And the first of them is KL Rahul. His handling by RCB has been curious to say the least. He came in for Gayle, who was away for his baby’s birth, and performed exceptionally well at the top order. The return of West Indian saw him demoted to No.4/5, and while he has played decently, he hasn’t at his real best. Just a day after he was named in India’s squad for tour to Zimbabwe and West Indies, he failed to perform against GL, when most needed.

Then there is Shane Watson, the leading wicket-taker in IPL 2016. For some reason, Watto has been absolutely sensational with the ball, but ordinary with the bat. Maybe someone might have told him to stop batting practicing, as the Gayle-Kohli-ABD trio will not give him a chance to bat. But seriously, Watto will be the first to admit his batting hasn’t been anyway near good enough. And barring a 13-ball 36 against Rising Pune Supergiants, he hasn’t offered much with his area of expertise.

And finally you have the duo of Sachin Baby and Stuart Baby. To their defence, they have barely got any chances to play a few balls, let alone take their time. But whenever they did, neither haven’t been particularly great. Baby especially might feel endangered of his place from Sarfaraz Khan, after failing to contribute anything against GL. Binny’s batting in the last game though showed signs of positivity. While RCB play him as a all-rounder, he should be contributing more with the bat, considering he bowls only one or two over every game.

It will be criminal for a team like RCB to rely on Iqbal Abdulla to play a crucial knock. While it isn’t strange or wrong to expect a tailender scoring runs once or twice, consequence of relying on them can be dangerous.

Luckily for RCB, right before the final they will get a chance to make it right in terms of batting. While it’s true cricket doesn’t work on if’s and but’s, but what if de Villiers failed against GL or Abdulla got out early. Surely for RCB, they need to make sure their batting fires, and reliance on tail-enders is very limited. 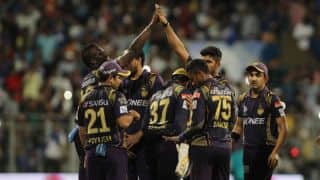