Ryan Harris, born on October 11, 1979, is an Australian quick whose claim to fame was becoming the Man of the Series for his team during the Ashes 2013. Jaideep Vaidya goes through the career of 'Rhino'. 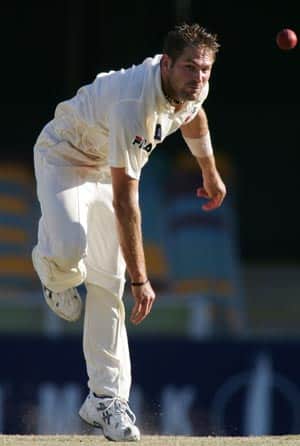 Ryan Harris, born on October 11, 1979, is an Australian quick whose claim to fame was becoming the Man of the Series for his team during the Ashes 2013. Jaideep Vaidya goes through the career of ‘Rhino’.

On the final day of the Ashes 2013, Ryan Harris walked off the field with a hamstring twinge at The Oval after bowling five overs in England’s second innings, taking two for 21. He had just accounted for the dangerous Kevin Pietersen, taking his series tally to 24, just two behind the series’ leading wicket-taker Graeme Swann.

Harris would go on to win Australia’s Man of the Series award later that day, perhaps an inconsequential fact considering the miserable series Australia had had (they had lost the five-match contest 3-0). But if you knew the 34-year-old Harris’s career timeline, you would then appreciate what he had managed on a difficult tour.

Before the series had begun, Harris had never before managed to play more than three Test matches in a row. In a career plagued with injuries, his body had never allowed him the honour of playing for his country continuously. A knee surgery had forced him to take the early flight home from England in 2010; a stress fracture on his ankle had ended what was looking like a promising Ashes campaign in 2010-11 during the Boxing Day Test; a hamstring niggle had kept him out of the third Test in Sri Lanka in what was Michael Clarke‘s first series as captain; a hip injury had botched up his plans during a tour of South Africa soon after; a shoulder surgery had ruined the summer of 2012-13; and then an Achilles complaint during the Indian Premier League (IPL) 2013 had all but that ended his Ashes hopes.

However, Harris fought his way back to fitness and booked a seat on the flight to the UK. He missed the first Test at Trent Bridge, but was named in the playing eleven for the second Test at Lord’s. As Australia bowled on Day One, Harris picked up the wickets of Joe Root and Pietersen in the first hour, added Jonathan Trott by the end of the day and had five to his name by the time the innings ended. Harris had set the pace for the rest of the tour and did not relent until his hamstring pulled up at The Oval. However, in the almost four back-to-back full Tests that he had played, he had won admiration among the players, officials, fans and cricket writers from both sides.

His relentless workhorse nature, ability to hit the deck and swing the ball deceivingly away from the right-hander on the dry pitches dished up in England and stubborn batting down the order provided a lot of hope for the future, especially the return leg of the Ashes back home. Like he had done many times in his career, the late bloomer had prolonged his days on the field and hushed up the critics.

It could have been so easy for him to have given up on his international career and amble around in the domestic circuit. After playing for South Australia from 2001-02 until the 2007-08 season, Harris made the switch to Queensland after failing to grab the attention of the national selectors. He made his debut for Australia in the summer of 2008-09, at the age of 29, in a One-Day International (ODI) against South Africa, where he took just one wicket at the cost of 54 runs.

He did not play another match in national colours for over a year. During Pakistan’s tour of Australia the following summer, Peter Siddle was forced to rule himself out after the first two ODIs due to a back injury. Harris was drafted in as the replacement and went on to take five for 43, winning him the Man of the Match award and a spot in the remaining two games. He claimed a second consecutive five-wicket haul in the following match and three wickets in the final match, taking his tally to 13 in three matches, at a miserly average of 8.15. He was named the Man of the Series.

In March 2010, Harris was called up to the Test squad for a series in New Zealand. In his debut Test, he took two for 42 and four for 77. In the second Test, he scalped three for 50 and none for 38, before being ruled out of the matches against Pakistan in England and the subsequent tour to India due to a knee injury. Harris returned to the squad for the Ashes 2010-11 and played in the second Test at Adelaide. He took two wickets in a match that Australia lost by an innings, before turning it up at Perth with three for 59 in the first innings and then six for 47 in the second, as Australia levelled the series. This was when the ankle fracture ruled him out of the rest of the series. In 2011, Harris took 11 wickets in a two-Test series against Sri Lanka before his hip injury and then played two of the four Tests against India at home, taking two and four wickets in them.

And so, as this article is being written, Harris prepares himself for his second home Ashes at the age of 34. He would be the first one to acknowledge that he hasn’t got much juice left in his tank, but for whatever time he is on the cricket field, he is sure to bust his guts. Former teammate Adam Gilchrist had the following to say about Harris in a column for ESPNcricinfo, which speaks a lot about the kind of person he is: “I’ve had a lot to do with Ryan through playing together in the IPL [for Kings XI Punjab], getting to know him as a cricketer and a man. It’s certainly no surprise to see him achieve the success that’s come his way in this [Ashes 2013] series.

“In my experience he embodies everything that is required of the perfect team cricketer. Ryan drives himself as hard as he possibly can for personal excellence, but in pursuing that it’s all done with a vision focused on whatever the team requires at any given moment. Whether he’s opening up with a new-ball spell, backing up late in the day for his 22nd over, or being part of a social function and trying to develop a sense of collective spirit, he’s very aware of what being a team member is about. I’ve never seen him shy away from those requirements, whether written or unwritten. A particularly important quality is the amount of interest he shows in his team-mates. He’s always been prepared to listen rather than be the dominant voice in the room, and that sort of humility helps enormously in creating a closeness among those around him.”

Sachin Tendulkar's 200th Test to be held at Wankhede Stadium