Nasim played for the Lahore Lions in the CLT20, scoring 207 runs in six games.

Despite toiling on the domestic circuit for seven years, Saad Nasim was relatively unheard of prior to the 2014 Champions League T20 (CLT20). Representing Lahore Lions, Nasim first made his presence known when he scored 58 out of a total of 98 against a pace attack that would not be out of place in a Test match. This was followed by 43 off 26 balls against Dolphins, in which he formed a partnership of 92 with Umar Akmal after Lahore were reduced to 34 for four in the 8th over, and then he took two for 19 to win the game for Lahore.

Three days later, Nasim blasted 69 off 55 balls out of a total of 124, coming in to bat with the scoreboard reading two for three. His 207 runs at an average of 41.4 in six Champions League matches drew the attention of the national selectors and he was picked for Pakistan’s solitary T20 against Australia earlier this month. Nasim justified the selectors’ faith by scoring 25 out of a total of 96 as wickets continued to tumble all around him with alarming regularity.

Nasim has built up an impressive portfolio for himself in domestic cricket as an all-rounder. While his most well known exploits have been with the bat, he has quietly accumulated 37 List-A wickets at 25.7 from 33 games and 24 T20 wickets at 27.9 from 37 games with his more than handy leg-spinners. If he can replicate this standard of performance at the international level, it may go some way towards filling the hole left by the absence of a genuine all-rounder in Pakistan’s limited overs teams.

In an exclusive interview with PakPassion.net, the 24 year-old discusses his experience of playing in the CLT20 in India as well as the Lahore Lions’ performance in that tournament, his international debut and how Aleem Dar played an important role in his development as a cricketer.

PakPassion.net (PP): How was the experience of playing at the Champions League T20?

Saad Nasim (SN): It was a very good experience for me, playing at the Champions League T20 in India. I cherished the opportunity of playing at such a big stage, and I am glad to have done well there. I would also like to mention the support I received from players like Mohammad Hafeez, Ahmed Shehzad, Umar Akmal, Nasir Jamshed and Wahab Riaz, which boosted my confidence and motivated me to do well there.

PP: It was quite a dramatic rise for you from relative unknown to one of the stars of Lahore Lions in India?

SN: I won’t say I was a completely unknown entity for the fans back in Pakistan, when I was selected for the Champions League T20 squad. I had represented the Pakistan ‘A’ team before and have been one of the top performers in domestic cricket for quite some time. I also played the T20 matches in Karachi, which were televised by a local sports channel ahead of the Champions League.

However the Champions League T20 was my first experience as far as ‘international’ cricket is concerned. I got a chance to rub shoulders with some of the biggest names in world cricket and it was a remarkable experience for me.

PP: Where do you think Lahore were lacking in India and what can they improve upon?

SN: Our overall performance in the Champions League T20 was very decent. In the last game, it was a very tough task for us to win by a margin of 46 runs. To achieve such success in a T20 game is nearly impossible. The match against Chennai Super Kings (CSK) was abandoned, which didn’t help our cause. I thought we could have won that game. We had defeated Mumbai Indians in the qualifying stages, and the match against Kolkata Knight Riders (KKR), which we lost, was a close one and we could have won that game as well. We had in form players in Mohammad Hafeez and Ahmed Shehzad, but fortune was not on our side. In the last match, as we were facing an uphill task, once we had no chances of qualification, we lost heart and gave up.

PP: You were top scorer for Pakistan on your international debut, how was the experience?

SN: It was an experience I cannot express in words. The team management backed me to their utmost. Waqar Younis, Moin Khan and Mushtaq Ahmed motivated me before the game. It felt great and in future, if I get another chance, I will make the most of it.

I feel I could have scored more than 25 runs. I should have stayed on the wicket for more time. There were not many overs remaining and I had to score runs quickly, which resulted in my dismissal. I had to take my chances as it was the 16th or the 17th over of the innings. But had I stayed there a bit longer, I am sure I would have helped my team in crossing the 100 mark. There was full support from my captain, Shahid Afridi, as well. He had asked me to play positive cricket, which is also my natural game.

PP: There’s quite a lot of competition in the spin-bowling all rounder department for Pakistan, are you up for the challenge?

SN: Yes, I am up for that challenge. I admit the fact there is a lot of competition in the all-rounder department and I am working hard on my batting skills and well as on my bowling. Moin Khan, Waqar Younis and Mushtaq Ahmed have all asked me to bowl as many overs as I can in domestic cricket. They have lifted me and they think I have the ability to become a productive all-rounder in the future. They see me playing for Pakistan as an all-rounder and I am determined to make my mark as an all-rounder. In the first round match in the Quaid-e-Azam Trophy, I took three wickets and scored 60 & 46.

PP: With Pakistan losing 3-0 to Australia in the ODIs do you think you have an outside chance of making the 2015 World Cup squad?

SN: Yes, I would love to be given more chances in the future to prove my worth. My goal is to do well in the Quaid-e-Azam trophy and on the basis of my performance in it, I want to be selected in the Pakistan ODI squad for the series against New Zealand. If I am able to do well in that series, automatically, I will become a candidate for the 2015 World Cup squad as well.

PP: Some are already mentioning you as a possible future replacement for Shahid Afridi in the one day and T20I side, how do you feel about that?

SN: It’s not on my mind as yet. As of now, I want to make a name for myself. Shahid Afridi is a big name in Pakistan cricket and it’s an honour for me to be considered as his replacement. He’s a very good all-rounder and the way he’s bowling these days, is a treat to watch. He’s not in good batting form at the moment but as soon as he clicks with his batting, I am sure he will be very effective.

PP: Aleem Dar has sang your praises as a cricketer, how does it feel to have someone like Aleem praising you?

SN: When I was playing school cricket, Aleem Dar used to be my coach. He supported me a lot and motivated me. Due to him, I started taking cricket seriously. He always used to push me to do well. He could see the talent in me. I had also performed well in front of him when he was officiating games. He has a great eye for cricket talent and he picks a lot of youngsters. He has officiated across the globe and he can judge a player very well.

PP: You’ve come through the Lahore club cricket scene, how competitive is it?

SN: Lahore cricket is still very tough. It may not have the intensity of the old days, but it is still very competitive. I am a product of school cricket and later, I started playing club cricket. I feel there is still a lot of fight amongst players for places within club teams in Lahore, which definitely helps.

Shahid Afridi is a big name in Pakistan cricket and it’s an honour for me to be considered as his replacement.

PP: Some say that the standard of club cricket in Pakistan has deteriorated. Your thoughts on that?

SN: Yes, I do agree with that. Over the years, the standard of club cricket in Pakistan has declined. Having said that, it is true that the senior players, who are regular members of the national team, do spend time playing for the cricket clubs around Pakistan during the off-season and work on their skills privately.

PP: You are a Hafiz-e-Quran. How do you combine the religious side of your life with cricket?

SN: Yes, I am a Hafiz-e-Quran, which means that I have committed the holy book to memory. One can very easily combine one’s religious side of with professional life. I offer prayers five times daily which is obligatory for Muslims and recite the Holy Quran on a daily basis as well. We do have other Hafiz-e-Quran in our national team as well. Not only Sarfraz Ahmed, who a lot of people are aware of, but Raza Hasan is also a Hafiz-e-Quran. Personally speaking, remembering the Almighty in my daily life and offering prayers gives me immense satisfaction.

PP: What are your hopes and plans for the ongoing domestic season?

SN: Yes, I do have targets in my mind for the ongoing domestic season. I intend to score at least three hundreds this season and at least 800-900 runs in total. Along with scoring runs, I want to improve on my bowling. If I am able to bag 50 wickets this season, I will deem it as a successful one for me. I know if I am able to perform in the Quaid-e-Azam trophy, I will become a candidate for national selection, which is the most important thing for me. 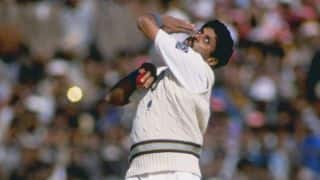 Mythbusting — Did Kapil Dev ruin his career figures by staying on too long?