Sachin Tendulkar's entry into the Wankhede Stadium on Day One of the second Test against West Indies is a moment he wouldn't forget all his life. Nishad Pai Vaidya recounts the beauty of the whole moment and how Tendulkar keeps a nation gripped even in his last game. 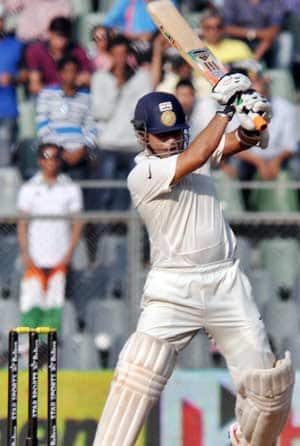 Sachin Tendulkar’s entry into the Wankhede Stadium on Day One of the second Test against West Indies is a moment he wouldn’t forget all his life. Nishad Pai Vaidya recounts the beauty of the whole moment and how Tendulkar keeps a nation gripped even in his last game.

Time stood still at the fall of the second wicket! A packed arena roared at the dismissal of their own man — an unimaginable scenario in any sport. But, they had all come to watch one man — someone who has enchanted the country with the wizardry of his willow. As Murali Vijay walked back after falling to Shane Shillingford, he may have thought, “What have I ever done for my own people to rejoice my fall?” But, one look at the stairs would have dispelled the dilemma for the Master strode down; perhaps for the final time. Sachin Tendulkar marched out like a gladiator who owned the Wankhede with his home-crowd welcoming him with a deafening roar.

A tear may have rolled down many cheeks at the Wankhede Stadium as Tendulkar walked out to bat on Day One. Darren Sammy’s West Indians duly assembled to give him a guard of honour. There was respect and emotion as Tendulkar walked up to thank Sammy for his team’s marvelous gesture. While all the focus was on Tendulkar, one could have easily missed the wide smile on Sammy’s face. Although the West Indies were out there to compete, they knew that they had invariably become a part of history. Years later, when people will look back at this day at the Wankhede, they will remember the West Indians for their huddle.

However, it was serious business once Tendulkar tapped the pitch. There were nerves as no one took their seats as he geared up for the first-ball. The standing ovation was to last till the end of the day as the majority of the crowd were on their feet whenever he took strike. As he took guard to face Shane Shillingford upfront, many a prayer were said. Some nervously asked: Would he endure Bradman’s fate? Those fears were only allayed a couple of overs later when he swept to square-leg for a single.

Tendulkar at the Wankhede was like a man on a mission — with an unparalleled level of pressure on his shoulders. For years, he has carried the weight of a billion expectations, but he knew this was different. But, his strokeplay brushed aside all the pressure. Yes, there was an expectant crowd, his mother in the stands and the eyes of the world on him. A cut off Shillingford and a silken cover-drive rolled back the years. There was artistry and dominance in those strokes as the crowd soaked in every shot he played.

Throughout the innings, there were two shots that stood out. The cover-drive off Tino Best and the lovely on-drive off Sammy were right out of the copybook. It was poetry in motion and even after all these years, he looked in complete control with the perfect balance of the head and the body. After a long time, Tendulkar has played the most flawless innings. During his recent struggle, there were moments when you noticed a few cracks, but they were cemented and filled for this special occasion. There was assurance in his defence and conviction in each stroke.

At the other end, a certain Cheteshwar Pujara calmly dealt with the bowling. The youngster has cemented his place in Indian team recently and has a long way to go. Irrespective of what he does in the coming years, his name is written in history for he partnered Tendulkar during his last Test. It is also a moment he would cherish as his hero bids good-bye. He went almost unnoticed, although he essayed a few crisp shots to the boundary.

While Tendulkar mesmerised the crowd, there was one moment that would stand out in memory. Towards the end of day’s play, his mother was on screen and she sheepishly smiled when she realised that she was in focus. The huge crowd clapped in unison for giving birth to a hero and nurturing a national gem. The same Wankhede crowd has come under fire in the past, but today, they showed their soft side when they applauded Mrs Rajni Tendulkar. In the centre, her son had a glance at the screen and his body language oozed strength and confidence. It was the most touching moment of the day — almost out of a Bollywood movie. With those monumental feats behind him, it is this moment that would stay with him as it is the first time his mother watched him bat live.

As he walked towards the dressing room at the end of day’s play, he turned to thank the crowd. But, his body language showed that there was more to come. As a new day would don at Mumbai on Friday and the sun would rise over the Wankhede, Tendulkar will take strike again; a billion people would walk out with him yet again and perhaps for the last time. A nation wouldn’t sleep today as they want a perfect farewell for their maestro. Champions write their own scripts and this genius is in the midst of writing one.

Sachin Tendulkar: Not the best of captains, but definitely a great leader