There is a photograph in my apartment of a two month-old me in the arms of the legendary Sunil Gavaskar. Quite frankly, I look petrified… pretty much like bowlers around the world at that time at the thought of having to get past the defence of the great Indian opener.

At that time Sachin Tendulkar would have been about 18 months old. Some 16 years later, we would meet in the unlikely setting of Uppingham School in Leicestershire, me as captain of the Warwickshire Under-16 squad at the National Finals, him as an international prodigy with the world at his feet.

I would be equally agitated at the moment of meeting Sachin as I looked in the photograph all those years back with Sunil. On this occasion, Sachin had arrived at the ground with my dad (Alvin Kallicharan), just in time to see my off-stump cart-wheeling some 10 or 15 yards past the ‘keeper off the bowling of Lancashire’s Glenn Chapple. The fact that my 11 was the third highest score of the innings was scant consolation.

Again, it was not unusual for my dad to walk into a ground just in perfect time to see me walking from the middle. Just ask my friend, Rob Rollins, the former Essex keeper — we were playing an Under-15 match in Coventry and I had felt largely untroubled getting to 30.

Dad walked in to a chorus of banter from the Essex lads — don’t tell anyone that sledging is only for grown ups – so I managed to play and miss at the next ball, go for a walk halfway up the track, not even bothering to look around at the smiling Rob removing the bails!

It got so bad at one point that parents and coaches would be looking out for dad and waving him away if I was anywhere near the crease. That is the point when he took to hiding behind the sight screens, and I suppose being 5’4″ was quite advantageous!

Standing just one inch taller at 5’5″ is the man known universally in cricket as ‘The Little Master’.

It was not getting out in front of Sachin that had disappointed me in 1990; it was losing. Moreover, I had scored a 50 in front of Brian Lara some few weeks earlier. At the end of the day, the Prince of Trinidad was much more important than the Boy from Bombay.

My little internal squabble was not the first time that the names Tendulkar and Lara would be put in direct opposition to each other. Admittedly, it was hardly the most important either.

Sachin would show his class a week later with his maiden Test century at Old Trafford, and quite frankly has not looked back since.

However, in my eyes, he was for most of this golden period in the shade of Lara. Certainly, that is what I felt at the time.

Do not get me wrong, Sachin was brilliant, sublime, or any similar adjective you could conjure from the divine. But Lara was Lara, a personality that transcended cricket, and the double world record holder.

Lara’s supporters, and as a West Indian I was one of them, had several arguments for why their man was better. He had the world records and he had a hunger for bigger scores, he was a member of a poor team that were reliant on him, he constantly won Test matches simply on his own, and he was just brilliant to watch with that high bat lift and phenomenal bat speed.

He had also destroyed Glenn McGrath and Shane Warne time after time, although people forget how many times the former, in particular, had the better of him. He was the last of the West Indian legends, so they said.

Sachin, they said, was a bit more predictable, was more orthodox than flair, had made most of his runs on the batting paradises of the subcontinent, and did not score Test hundreds when it really mattered.

In addition, he did not carry the same pressure, as he always had class players around him, from Mohammad Azharuddin and Ravi Shastri in his early days, through Rahul Dravid and Sourav Ganguly, past VVS Laxman and Virender Sehwag, and now on to the likes of Virat Kohli.

If that list is slightly exaggerated, it is deliberate. Sachin has been around for ever, and still seems as fresh, hungry and modest as he ever was.

It has not always been perfect. Like Lara, the captaincy weighed heavily on his shoulders, and there have been injuries, although relatively few.

I had seen Sachin score a wonderful hundred, albeit in a losing cause, at Edgbaston in the 1996 series. In 1999, I watched him at close quarters during the World Cup, and in 2003 was present at Leeds for his scintillating 193.

Despite all of this, and the record that he had built in Test cricket, I will still — at this stage — have Lara in front — just a wee bit. However, this began to change, especially during that tour to Australia in 2004.

How could any man score 241 not out against the Aussies in Sydney, without playing one of his trademark strokes? So vulnerable did he feel playing the cover-drive as it had been his downfall on several occasions in the series, that he banned himself from playing it.

To have the knowledge of his game to do it was one thing. To have the discipline to carry it through in the middle was another. To find ways of scoring runs in other areas to the point of a double century, well that was, in my opinion, one of the greatest innings in the history of Test match cricket.

He seems simply to have got better with age and maturity, and his straightforward technique is so good, that he rarely gets into trouble with it. His eye remains good, his footwork superb, and his timing and placement impeccable. He is as complete a player as you could ever wish to see, and a credit to himself and his country.

As India have climbed on the world stage, so too has he, and that would seem impossible given that he was already treated as a God in India. What he has done is answer the critics that said that he did not score big hundreds in match-winning causes.

The two that immediately spring to mind were just last year where his 106 was part of a winning effort against South Africa in Calcutta, and his 214 crucial towards defeating Australia in Bangalore.

Of his first 26 Test match centuries — only six were in matches that India won.

Of his last 25, 14 have been in victorious causes.

Of his first 30 Test match centuries, only two were doubles, whereas he has made four in the last 21.

Of Lara’s 34 Test centuries, only seven were in winning causes, and five of those were in his first 12. The great West Indian did, however, score nine double (or bigger) centuries.

The bottom line is that, as cricket fans, we have been blessed to have both of these men gracing our generation. What those statistics above prove is little beyond common sense… when you are in a good team, you win more often, and this has happened for Sachin as India have improved, and eroded for Brian with the decline of the West Indies.

Sachin’s longevity and humility are everything that you want to admire in a sportsman. Add to that his incredible talent, and you have one of the true legends of the ages.

Who is the better of the two? To be honest, I do not really care. Different people will have different opinions, and that is the beauty of professional sport.

If you really put me on the spot, it would be with a heavy heart that I deny Brian Charles Lara, but with a great smile that I acknowledge Sachin Ramesh Tendulkar as the great player of his generation.

(Rohan Kallicharan, son of the legendary batsman Alvin Kallicharan, is a West Indian cricket enthusiast based in the UK who played at under-19 level. He is now a Recruitment Professional who writes about the game in his free time. He is a columnist for All Out Cricket Magazine. He also has own sports’ blog http://hetoreahamstring.co.uk) 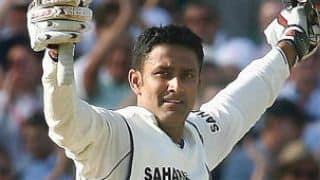