Comparison is a part and parcel of every walk of life, leave alone any sport. But only sometimes are comparisons struck across sports and it is indeed quite rare that this comparison can be made when both are still active in their circuits and when a good chunk of their careers have overlapped. 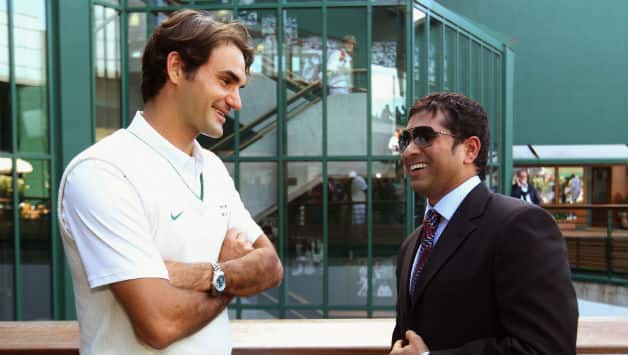 Roger Federer (left) and Sachin Tendulkar are at the dusk of their careers, being in the ‘old to play’ zone — Sachin is now 40 and Federer is 31 © Getty Images

Comparison is a part and parcel of every walk of life, leave alone any sport. But only sometimes are comparisons struck across sports and it is indeed quite rare that this comparison can be made when both are still active in their circuits and when a good chunk of their careers have overlapped.

For their fans, a tough day at office can be overcome by only spending a few minutes watching them play; a poor orator turns into a professional during raging debates between fans of rivals, although they may be peers. A nation could come to a standstill, so could Sunday evenings and conference meetings.

Sport never intends to cause such a profligate waste of man-hours but it never ceases to do so as well. It provides us these instruments, through which we get attached to, for life. The sport as such is intangible and just a set of useless statements on paper that legitimise its means of playing, but these instruments- the sportspersons are those who bring it to tangible terms to every home, to every heart. And then, it becomes a way of life, a necessity and more so with the same instruments.

One of the oldest such memories of two great sportspersons being at a place at the same time during their peak could have been when Dhyan Chand toured Australia and Sir Don Bradman quipping, “He scores goals like we score runs!”. But, we have never quite seen the best of both. It is through archived memory that we still speak about them even today. But definitely this generation has seen both Sachin Tendulkar and Roger Federer.

Their careers have taken a magical course that they might have not noticed. First they arrived but were not really noticed. Then they made the whole world realise that they had arrived once they conquered the biggest enemy within and the big rival who stood a few yards apart. A teenager standing tall on a burning deck when others collapsed — not Casablanca, but Tendulkar at Perth in 1992. A young man with quite some temper, who mimicked the legend at the other side of the net in how he played — Federer beating Sampras after a delicious display of serve and volley tennis in the fourth round of Wimbledon 2001.

This was the first of many more to come. Then, they fortified by adding one hunted animal on their walls and one trophy to their cabinets at a time, but not without facing hurdles along the way. What sets them apart is how they emerged victorious, with strict adherence to their coaching manual and later going on to come up with their bit of innovation- the tweener and the upper cut to bouncers.

Even after numerous accolades, advertisements and adulation they have remained the same throughout. And queerly, the turbulent days in their careers have begun around the same point of time and even more strangely they have had just that ONE big success that everyone wanted — the seventh Wimbledon trophy and the 100th international hundred and both came within months of each other. And now, they are at the dusk of their careers, being in the ‘old to play’ zone — Sachin is now 40 and Federer, 31. They are now fallible to some, whom they would have quelled a few years back.

The twining goes even further as Tendulkar loves playing tennis, with John McEnroe being his idol and Federer knowing much about cricket, thanks to his mother’s South African origin. From a more worried point of view, our generation is lucky to witness the last of the classics perhaps — cricket is going more outlandish with T20 cricket and tennis is becoming a very physical game.

That subtle difference between cricket and tennis is what makes the whole thing enticing. Tennis is like a sand castle of which you alone are the architect and you get the alarm in the form of a break point in case your castle is set to be broken down. On the flipside, cricket, especially batting is like, the sand castle that you built with another helping hand, but if you don’t keep vigil or don’t have another hand to support, you lose the castle. And there are no premonitions. If you are out, your castle is history.

What makes me write this piece, after pondering a lot about the course their careers have taken are specific matches they ended up losing. Being magnificent in victory is normal. But being magnificent in defeat is something only a few can eke out. With due credits to the victorious parties in each case, the world remembers those matches as what Federer lost but not Nadal outlasting him, or Tendulkar rose above his back spasm and almost the opposition but not Pakistan holding their nerve. Wimbledon 2008 final is one of the greatest finals to have been played and despite Federer finishing with the other trophy for the first time in many years; we all remember the encounter for the grit that Federer showed when Nadal threw the kitchen sink at him. Tendulkar had scored many other centuries at ease but with half the side down, he dropped the anchor, braved a bad back and a good attack and almost saw India through.

In both cases, they did not end up where they would have liked to, but nevertheless, they were victors in their own right and the images of their head held down still makes many fans proud. Almost in every other case, victory never belongs to the vanquished.

These once in a generation stroke-makers can see retirement lurking beneath their kit bags and they have little left in them. As we elicit only the best in the short future from them, there is an entire growing up to be savoured. As I close my eyes, the Rolex ad plays in memory — besides the classy sportsman and the entrancing dials of the watch, the words “When does one become a legend?” flashes across and there is a whole new level of psychological and emotional high, swamped by  winners, straight drives and jubilation.

When I open my eyes to reality, there is probably some emptiness with the tears saved for the future when they shall no longer be around to make the ball grace every blade of grass on the playing field.