I once had the opportunity to travel from Mumbai to Singapore with Raj Singh Dungarpur. He was on his way to New Zealand as a representative of the Board of Control for Cricket in India (BCCI) at a meeting of the International Cricket Council (ICC). I once had the opportunity to travel from Mumbai to Singapore with Raj Singh Dungarpur. He was on his way to New Zealand as a representative of the Board of Control for Cricket in India (BCCI) at a meeting of the International Cricket Council (ICC). During our conversation, I asked him what his best decision was. Almost before I could finish my question he said, “Selecting Sachin Tendulkar to play for India,” and added with a twinkle in his eye, “although if you had seen him play, as often I had, it wasn’t really a risky decision. It was bold, but not risky. And mark my words, any investment in Tendulkar will always pay off.”

Almost 24 years after that “bold decision”, Tendulkar will retire from international cricket after having played 200 Test matches.

And in these 24 years, almost as often as we have heard the chant “Saaaaaachin Saaaaaachin” we have also had Tendulkar embody the very essence of the argumentative Indian. Rahul Bhattacharya captures this beautifully in a piece he wrote for Cricinfo, “If the strokes are flowing, spectators feel something beyond pleasure. They feel something like gratitude. The silence that greets his dismissal is about the loudest sound in sport. With Tendulkar, the discussion is not how he got out, but why. Susceptible to left-arm spin? To the inswinger? To the big occasion? The issue is not about whether it was good or not, but where does it rank? A Tendulkar innings is never over when it is over. It is simply a basis for negotiation. He might be behind headphones or helmet, but outside people are talking, shouting, fighting, conceding, bargaining, waiting. He is a national habit.”

Tendulkar never promised that, at 40, he would produce the fluent strokes he played when he was 28. Yet, we always expected ‘the Tendulkar of old’ or ‘the Tendulkar of 1998’. It wasn’t enough that we could purchase a DVD of the famous ‘Desert Storm’ series and see that Tendulkar of old. It was as though even time stood still when we evaluated Tendulkar. We could not accept an ageing Tendulkar and watch the Tendulkar of now. For the argumentative Indian, if Tendulkar did not reproduce his shots from 1998, he did not deserve to be in the team in 2013.

Tendulkar himself never claimed he was God. But, we made him God and then the rest of us brought him down. Bit by bit.

In the end analysis though, in a country that is somewhat bereft of (sporting) heroes, Tendulkar, the hero, has outlasted the argumentative Indian, crafted a career without a single blemish and stood as a beacon of hope and a giver of pleasure.

Perhaps that is the mark of (his) greatness in the Indian context. Greatness in sport in India is perhaps not defined by the heady confluence of elegance, balance, poise, grace, technique, focus, determination, power, dominance, imperiousness, confidence, occasional arrogance, consistency, longevity, awareness and intent. He has been all of that over a long career. He has had all of those qualities over an extensive and distinguished career. Perhaps greatness in the Indian sporting context has to be marked by violent disagreements on the very essence of that greatness; what exactly that greatness is about. His greatness should have been automatically assured. Yet in India, Tendulkar has always polarized opinion. And that, perhaps, ought to be the accepted definition of greatness in a country that needs heroes but is equally eager to tear them down and ‘cut them down to size’ every now and then.

Sachin Tendulkar announced his retirement from all forms of cricket on Thursday, 10-10-2013. The fact that he had always worn the Number 10 India jersey may have had something to do with the timing of his retirement on this day. Or maybe it was the TEN that prefixed his surname which, in turn, may have earned him the No 10 jersey early on in his career.

The one other day that may have worked better for him would have been 10-10-10. If he had retired on October 10,  2010, he may have retired some five years too early. Indeed, on that very day, he was 44 not out at Bangalore against the visiting Australians. He went on to make a beautifully crafted 214 in that match. If he had retired on 10-10-10, we would have also missed his majestic 146 that he crafted at Cape Town on January 4, 2011. That Cape Town knock was his last Test century although, after that, he did come close to the three-figure mark on a few occasions: a 91 (against England at the Oval in 2011) a 94 (against West Indies in Mumbai in 2011), a beautifully crafted 73 (against Australia at the Melbourne Cricket Ground in 2011) a 76 (against England at the Eden Gardens in 2012) and an 81 (against Australia at Chennai in 2013).

On 10-10-2013, in my view, he has retired two years too early. I say that although I am confident that my view is going to be questioned quite soundly and ridiculed significantly. But that is what you get when you have an opinion on Tendulkar. There is no middle ground. You are either pro-Tendulkar or anti-Tendulkar. He polarises views like no other champion players do — particularly in India.

As Siddhartha Vaidyanathan says in a post on Tendulkar, “What pains me is how a large part of discourse on the internet is so limited to black and white. You are apparently either for Tendulkar or against him. If you question his place in the side, you are a moron who has no right to express an opinion or an ignorant bum who has never held a bat in his life or someone with a vested interest.”

For all talk that he didn’t care about numbers and statistics, numbers did seem to matter to the man; or at least to the people around him who had a stake in him —and many did. So the choice of 10-10-2013 to announce his retirement was possibly deliberately crafted and carefully constructed like the 241 not out he made at Sydney in January 2004. Numbers may not have mattered to the man, but they did to the industry around the man. And there is an industry around the man an industry that seems filled with brand merchants, product architects, advertising honchos and people who launch things.

Perhaps I ought to have said ‘there was an industry around him’.

I would, if I can bring myself to talk about God in the past tense.

I cannot. At least, not yet.

Numbers did seem to matter. He worked hard to get to that 200th Test. Whether he did so because he wanted to, himself, or because of the people who had invested in him who had a vested interest in prolonging his career, we will never know. But it had been an open secret for far too long that he would play on until his 200th Test and that that 200th Test would be played in India. Indeed, it was the worst kept secret in the Indian cricket landscape; an environment that seems to have a steady growth — and not a decline — in innuendo and secret handshakes and less and less of assured planning and fact.

That Tendulkar would retire in 2013 and shortly after his 200th Test was Indian cricket’s worst kept secret. That his retirement in a home series was engineered by his cricket Board just makes the cricket world sit up again and wonder at the beast at the ICC table that we Indian fans have created; the ogre that we continually endure and support. 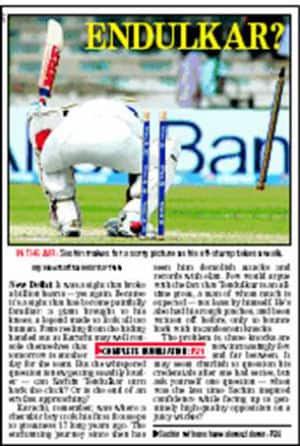 We made Sachin Tendulkar God. And the same people who made him God cruelly called him “Endulkar” in 2006 when he was going through a rough patch, as all human beings must (and do)

So how did you feel when you heard of the news of Tendulkar’s retirement?

Me? I sensed, since the start of this year that Tendulkar would retire after his 200th Test. Yet, even though I was prepared for the announcement, I felt numb when I heard the news. Totally numb. I cannot imagine an India Test team without Tendulkar. I cannot quite bring myself to accept that someone else will now walk at the fall of the second wicket.

There was always a calm sense of assurance that Sachin Tendulkar would walk down the steps at the fall of the second wicket, walk down the pavilion steps (or ramp), look skyward, squeeze his eyes, walk purposefully to the wicket, take guard and perform his pre-stance box adjustment routine. That was assurance. That gave me comfort. And I cannot yet bring myself to accept that the now famous and always assuring pre-stance crotch adjustment will now be replaced by the vigorous bat twirl and inside of the helmet wipe routine that belongs to Virat Kohli.

That may happen too, only because it must.

Tendulkar had given me — and many others like me — much joy in the 1990s when India got routinely thrashed all around the world. He gave me cause to celebrate because of the way he played the game. His cricket was simple and beautiful.

I had watched with admiration and pride as he grew in stature: he was first a kid playing in the midst of grown-ups, then a boy, then a lad, then a man and then, a God in his country and then, a statesman in World cricket. He did not want to be a God, mind you. We made him God. And the same people who made him God cruelly called him “Endulkar” in 2006 when he was going through a rough patch, as all human beings must (and do).

But that was us fans.

This God did have clay feet. In the end, there was only one constant. He had always played the beautiful game with the same wide-eyed enthusiasm. He only wanted to play. He knew no other life.

(Mohan Krishnamoorthy is an unabashed fan of cricket. He tweets at @mohank and blogs at www.i3j3cricket.com and mohankaus.blogspot.com. The above article was first published in DNA)

Sachin Tendulkar retirement: Hardest decision I have ever taken, says the Little Master