Ever since India won the World Cup 2011, it was widely assumed that Tendulkar would soon step down from ODIs because he had pursued that trophy without success through the length of his long international career. But with the latest press conference, Tendulkar has placed the cards on the table and the ball is now in the selectors’ court. 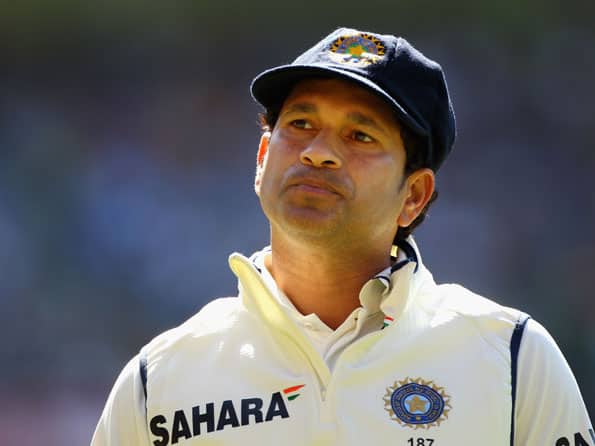 In ODIs since 2011 World Cup, Sachin Tendulkar (above) averages 31.50 off 10 innings with one century and a half century – both scored in the recent Asia Cup. In Tests since Cape Town in January 2011, he averages 37 from 21 innings. Not flattering numbers. © Getty Images

Sachin Tendulkar addressed questions on his future in One-day Internationals (ODIs) in a press conference and has seemingly decided to play it straight. He has categorically said he is not thinking of retirement and would do so on the day that he felt he no longer had the same passion to represent the nation in cricket anymore. Interestingly, he had also said that it would be selfish to retire when on top and also that the decision of when to retire should be left to him.

Ever since India won the World Cup 2011, it was widely assumed that Tendulkar would soon step down from ODIs because he had pursued that trophy without success through the length of his long international career. Nothing of the sort happened and the subject of his retirement was raised in every subsequent ODI tournament that involved India.

Without much communication from either Tendulkar or the selectors, there were suggestions that perhaps the selectors didn’t have the guts to approach a potentially controversial decision and preferred indecision and inaction in sharp contrast to the Australian selectors in dealing with Ricky Ponting’s ODI future. But with the latest press conference, Tendulkar has placed the cards on the table and the ball is now in the selectors’ court. They can ill afford to wait on Tendulkar to make his decision now. They will have to make theirs, if the need ever arises.

Some former players and journalists have suggested that a player of Tendulkar’s stature should not be dropped and should instead be given the dignity of choosing his moment. But that is only tenable when the player makes his decision based not only on his form or motivation levels but also the team’s prospects. On the other hand, Tendulkar has only talked about his motivation to play on in his statement.

The worst case scenario would be that circa 2014, Tendulkar just doesn’t ‘feel like’ playing in ODIs anymore and the selectors have precisely a year to find a suitable replacement for the World Cup. Not an ideal situation for a team to be in.

The player’s desire to carry on in a format or all formats of the game cannot be the sole basis of making this decision. Tendulkar’s observation that “it is selfish to retire at the top” has made waves and is being treated with so much awe it might well be the New Testament of cricket. I don’t think too much should be read into Tendulkar’s views on the subject. But the above demonstrates that such an approach is no more foolproof than it is to retire at the top. The ideal approach would be for the selectors and the concerned player to discuss and chart out his future, but apparently, that is not how they will go about it.

Coming back to ‘retiring at the top’, surely, a player at the top of his game, and especially when the said player is Tendulkar, is only an asset to the team and the question of dropping him or his own retirement doesn’t arise, would it? Unfortunately, the numbers do not indicate so positively that Tendulkar is still at the top of his game.

In ODIs since the World Cup, he averages 31.50 off 10 innings with one century and a half century. These were both scored in the recently-concluded Asia Cup and his performances were unflattering in the Commonwealth Bank series, where his contribution was arguably more crucial to the team.

In Test matches since the Test played at Cape Town against South Africa in January 2011, Tendulkar averages 37 from 21 innings. While these numbers are not completely underwhelming, they also don’t make the most convincing case for his form.  It is also a distinct drop from his spectacular form in 2010. Tendulkar may not yet be a liability for the team, but I am not convinced that these numbers reflect a great batsman at the top of his game.

With the latest press conference, Tendulkar has strongly indicated that he will approach the subject of retirement in the manner that Ricky Ponting did. Hence, it is also important for the selectors to take a similar approach as their Australian counterparts and not be swayed by sentiment. They would have to carefully assess his recent performances as well as those in upcoming fixtures to make their decision and if that means somebody else may get a shot at India’s defence of their World Cup title in 2015, so be it.

(Madan Mohan is a 26-year old chartered accountant from Mumbai.  The writing bug bit him when he was 8 and to date, he has not been cured of it. He loves music, cricket, tennis and cinema and writing on cricket is like the icing on the cake. He also writes a blog if he is not feeling too lazy at http://rothrocks.wordpress.com/)